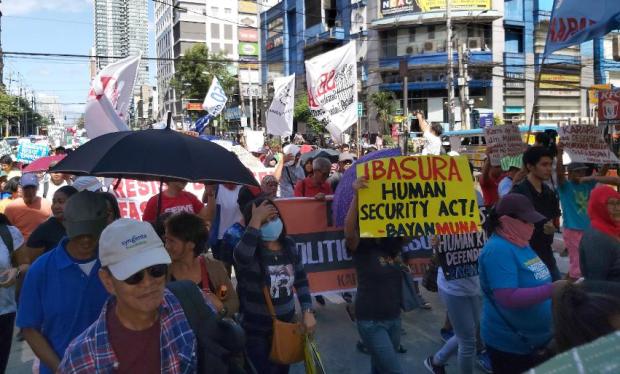 Protesters march on the 34th anniversary of the People Power Revolution on Feb. 26, 2020, making the same call for justice and the upholding of press freedom under the Duterte administration that their predecessors did under the martial law regime of President Ferdinand Marcos. (Photo from Bagong Alyansang Makabayan)

MANILA, Philippines – Several leftist groups marked the 34th anniversary of the Edsa People Power Revolution on Tuesday by calling for justice and the upholding of press freedom in the face of what they viewed as authoritarian policies of President Rodrigo Duterte.

Members of the Bagong Alyansang Makabayan (Bayan) staged protests from España Boulevard up to the Mendiola Peace Arch in Sampaloc, Manila, said on Tuesday.

The said they were seeing similarities between the martial law regime of former President Ferdinand Marcos and the present Duterte administration.

“Edsa remains a beacon of hope for all who resist tyranny today. President Rodrigo Duterte is mistaken if he thinks his reign of terror can last forever,” Bayan Secretary-General Renato Reyes said in a statement.

“We live in dangerous times reminiscent of the Martial Law years,” he added. “Press freedom and freedom of expression are under attack in unprecedented ways. The law has been weaponized to suppress critics of the regime. Anti-terror laws pending in Congress threaten the right to organize as well as free speech.”

The Edsa Revolution of February 1986 drove Marcos and his family out of Malacañang, ending an over two-decades grip on power.

During martial law, several media outlets were either sequestered or closed down, forcing the rise of a so-called mosquito press and campus journalists to team up to report on the country’s state.

Currently, press freedom issues have resurfaced with the impending shut down of network giant ABS-CBN, which Duterte deemed biased for not airing his campaign advertisements in the 2016 elections.

“Counter-insurgency is also being waged in the notorious Marcosian way of targeting unarmed civilians and poor communities. Mass arrests and an increased number of political prisoners have marked the recent 6 months of this regime,” Reyes explained.

“The worsening human rights situation and the deepening economic crisis drives the people to greater resistance against the fascist Duterte regime. The people are calling for an end to the tyranny and plunder of the regime. The people demand that the roots of the armed conflict are likewise addressed in a thorough and meaningful way,” he added.

Martial law was marred with issues of massive corruption and human rights violations, with the global watchdog Amnesty International saying that over 3,200 persons were killed under Marcos’s watch, while 35,000 others were reported tortured and 878 forcibly disappeared.

Observers also believe that the whole amount of the Marcos loot — a collection of artworks, cash, and other assets — range from $5 to $10 billion.

READ: What went before: 1,838 desaparecidos since Marcos

Rep. Carlos Zarate of the Bayan Muna party-list justified the current protests as a response to what people perceive as some of the dark aspects of Marcos’ martial law rule that had resurfaced under Duterte, who has openly admitted admiring the late dictator.

[Going on strikes, 34 years after the Martial Law regime was toppled, is still relevant as of now because we see that the dark parts of our history are being revived.]

[We should be wary and be angry at the railroading of anti-people policies like the Anti-Terror Law.]