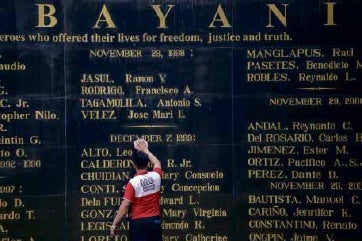 IN MEMORIAM The names of some of the martyrs and heroes of martial law are inscribed on theWall of Remembrance at Bantayog ng mga Bayani in Quezon City.—JAM STA. ROSA

Students. Labor leaders. Farmers. Members of the clergy. Teachers.  Most of them were young activists in their teens, others in their 40s or 50s.

But they all shared a common fate:  They all disappeared in the dark days of the Marcos regime, never to be heard from again.

The number of missing or “desaparecidos” vary, from 783 out of 101,458 martial law victims, based on a record kept at the William S. Richardson School of Law Library at the University of Hawaii, to more than 500, according to the memorial put up on the grounds of Redemptorist Church in Baclaran. The Bantayog ng mga Bayani (Monument of Heroes) in Quezon City lists 30.

Here are the stories of nine men and women whose efforts, passions and ideas made them targets of violence, and whose defiance set them apart at a time when it was safer to stay silent and just “move on.”

Ladlad was supposed to meet with comrades somewhere near Paco Church in Manila in November 1975, when she disappeared with the entire group. She was 25.

As student council chair and activist, Enriquez negotiated with school authorities at the Luzonian University in Quezon province for improvements in facilities and a freeze on tuition. He also volunteered with the local unit of Task Force Detainees of the Philippines, which had documented numerous cases of military abuses in his province.

On Aug. 29, 1985, while on his way home, Enriquez was commuting in a tricycle when he was grabbed by two armed men and forced into a car. His parents wrote letters to authorities, all the way up to Malacañang, and waited in various detention centers, military camps and defense offices. They never found him.

In her senior year in high school, Ilagan joined the Kabataang Makabayan and became active in Panday Sining, the group’s cultural arm that staged street plays and musicals depicting the problems of Philippine society.

She later enrolled at the UPLB but left in 1972, when martial law was declared, to continue her work organizing and educating communities and sectors.

In July 1977, Ilagan was abducted while attending a meeting and became one of the “Southern Tagalog 10,” the biggest single group that disappeared during martial law.

He once dreamed of becoming a scientist or engineer, but after graduating from the Philippine Science High School and later enrolling in UP, Quimpo dropped out to become a full-time activist.

In April 1973, Quimpo and fellow activists were taken by antinarcotics agents and subjected to physical and psychological torture. He was released three months later and resumed his studies at UP.

In October 1977, members of the Philippine Constabulary raided their family residence in Manila, looking for his younger activist brother, Ishmael Jr., who was out at the time. Two weeks later, on Oct. 29, Quimpo left the house but assured his loved ones that he would be back for dinner. It was their last time to see him.

In July 1977, Sales disappeared, along with Ilagan and other activists. There was no record of her arrest and her body was never found.

Reyes was an engineering sophomore at Feati University when he was drawn to activism.  He was instrumental in forming the Feati chapter of the SDK, his first organization.

The plight of factory workers in Metro Manila piqued Reyes’ interest and, with SDK’s encouragement, he established the organization’s labor committee and helped form unions in factories and discussion groups with workers.

In May 1977, Reyes and labor lawyer Hermon Lagman, who were supposed to meet with other leaders for a consultation, never made it to the meeting place.

After passing the bar in 1971, Lagman offered free legal service to workers pursuing cases of unfair labor practices. He was a volunteer lawyer of the Citizens’ Legal Aid Society in the Philippines and a founding member of the Free Legal Assistance Group.

He was among the lawyers arrested when martial law was declared in 1972 and was kept in prison for two months without charges.

A legal counsel to many labor unions, Lagman openly defied the martial law ban on strikes and other mass actions. He’s been reported missing since May 11, 1977.  His family believes he was abducted by government agents.

The abduction of Romano, a Redemptorist priest and Bagong Alyansang Makabayan vice president for Central Visayas, was one of the best known cases of desaparecidos under the Marcos dictatorship. Numerous appeals for his release were made in the country and abroad, including one from then Pope John Paul II.

Romano helped put up AMA-Sugbu, a militant workers’ alliance in Cebu province. As the country grew increasingly militarized, he joined Task Force Detainees of the Philippines and helped in giving refuge to victims of military harassment. He was arrested twice and briefly detained.

On July 11, 1985, the 44-year-old Romano was abducted by armed men believed to be military intelligence agents. He was never heard from or seen again.

As barangay chair of Ibujan in San Mariano, Isabela province, in 1982, Gabriel put a stop to petty crimes, settled family disputes and neighborhood quarrels, and called on residents to resist corruption and abuses.

As military presence grew in Isabela in the 1980s, authorities stepped up the recruitment of civilians to form a local armed militia.  When Gabriel refused to cooperate, they called him a communist sympathizer.

On Oct. 7, 1985, armed men led by an Army sergeant took Gabriel and three other members of the Ibujan barangay council, saying they were needed to serve as guides for a military sortie. They have not been found to this day. —COMPILED BY INQUIRER RESEARCH