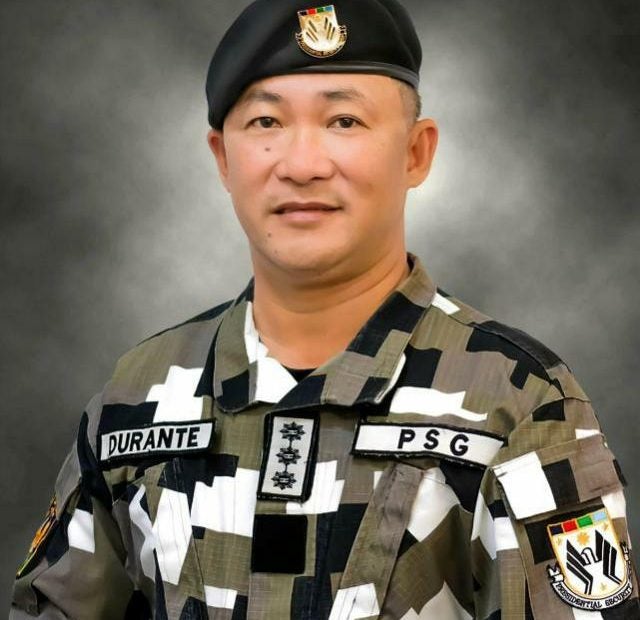 Durante formally took over the PSG leadership on Tuesday afternoon during the turnover ceremony witnessed by Duterte and other key security and military officials.

Durante, a “full-blooded” Scout Ranger, described his new role as “a battlefront where failure is never considered.”

“In my military career, I stayed in the frontline for 11 years fighting the enemies of the state. I have led my men in numerous battles. I’ve fought, I’ve cried and I’ve bled. I never backed out in any firefight and I’ve seen some of my men bleed and die. But this never stopped me from pursuing and ultimately claim victory,” Durante said in his speech.

“Now, I am on a different battlefield, a battlefront where failure is never considered,” he added.

The Army colonel from Davao City noted how Duterte’s style, stance against drugs, criminality, and corruption, and his war against terrorism put him in a precarious position.

“Therefore, all PSG troopers under my watch must follow this dictum “leave no mistakes’,” he said.

He also urged PSG personnel to always bear in mind that the “security gadgetry” they possess are only as effective “as the people that use them.”

“Leave the critics behind. It is not the critic that counts but to us PSG room for troopers who risk our lives in the frontline,” Durante said.

Furthermore, Durante, a member of the Philippine Military Academy Class of 1992, assured that under his watch, the PSG personnel  “would not only do our best” but would also sacrifice their lives and limb to protect the President.

The PSG is an elite force that is tasked to protect the president of the Republic of the Philippines.

Prior to his appointment, Durante served as commander of the Presidential Escorts Battalion of the close-in security detail. He is Duterte’s 4th PSG chief and replaced Brig. Gen. Jose Eriel Niembra who will take a new post as Brigade Commander of the 701st Infantry Brigade, 7th Infantry Division, Philippine Army stationed in Mati, Davao Oriental.

Read Next
China bans consumption of wild animals
EDITORS' PICK
BREAKING: 1,075 people in PH has coronavirus disease – DOH
Style and music journeys with Claudia Barretto
DILG to stranded workers: ‘Stay where you are’ until Luzon-wide quarantine is over
Cebu City closes its borders
IATF: Food firms to operate with 50% of workforce during Luzon quarantine
UP-PGH wards for COVID-19 patients finished in 5 days
MOST READ
Pacquiao to seek probe on leaked private letter from Barangay Dasmariñas
BREAKING: 1,075 people in PH have coronavirus disease – DOH
Tootsy Angara bares neighbor wanted them out of village
Nurse who assisted patient ‘PH744’ in Nueva Vizcaya tests positive for COVID-19
Don't miss out on the latest news and information.

Faces of the News: Charles, Prince of Wales