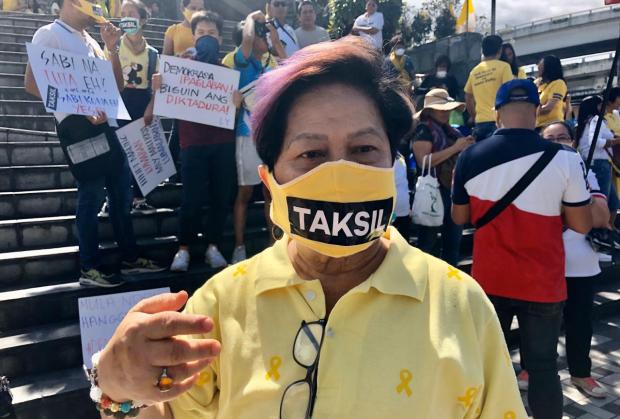 MANILA, Philippines — Opposition coalition Tindig Pilipinas on Tuesday hit the administration of President Rodrigo Duterte for the franchise woes of broadcast network ABS-CBN as it commemorated the 34th anniversary of the EDSA People Power Revolution that toppled the presidency of late dictator Ferdinand Marcos in 1986.

Corazon “Dinky” Soliman, former Social Welfare Secretary at the time of former President Benigno Aquino III and now convenor of Tindig Pilipinas, recounted how press freedom was curtailed during the martial law and compared it to the ordeal that the country’s largest network now going through.

She also questioned Sen. Christopher “Bong” Go, Duterte’s former special aide and now his close ally in the Senate, on why he would convince the President to have the franchise of the network be renewed.

[What is their game now that Sen. Bong Go said he would convince the President not to close the network? Why would Duterte have to be convinced? Is there not a law or a process that can be followed because it is what is stated in the law and Constitution?]

Members of the coalition also attended a Holy Mass at the church prior to the rally. In holding the protest, the group shouted “Duterte virus, puksain [eliminate]” in unison, mixing the name of the President and the coronavirus disease that has so far killed over 2,600 individuals.

The protesters, all in clad in yellow shirts, were wearing cloth masks bearing words critical of Duterte.

Soliman, meanwhile, explained that there was no large mass demonstration staged during the commemoration of the bloodless revolt as a safety measure amid the threat of the coronavirus disease.

She noted, however, that many youths who did not witness the human rights violations in the Marcos dictatorship had been joining protests in different parts of Metro Manila.