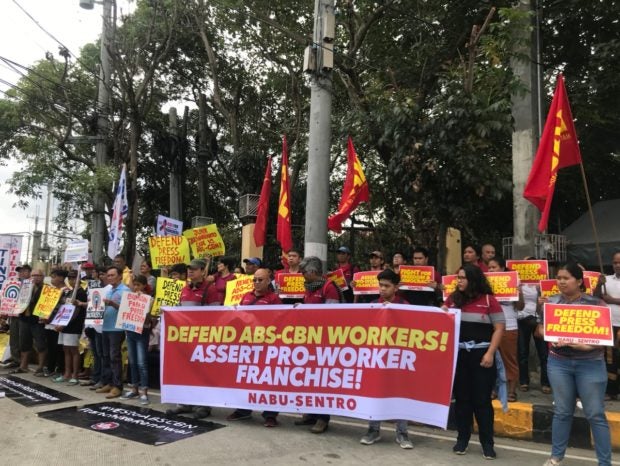 Several groups hold a protest outside the premises of the Senate on Monday, Feb. 24, 2020, to call for the renewal of franchise of broadcast network ABS-CBN. Photo by Cathy Miranda/INQUIRER.net

This was how the leader of the ABS-CBN labor union described the predicament that the TV network’s reported 11,000 workers found themselves in.

Jon Villanueva, president of the ABS-CBN Rank-and-File Employees’ Union, admitted that members and their families have been restless because the future of the broadcast giant’s legislative license remains in limbo following President Rodrigo Duterte’s threats to block its extension.

Holding back tears, he told a Senate committee chaired by Sen. Grace Poe that the lives of employees have become better since they are employed by the country’s biggest media network.

“All of us employees are worried as the days go by. It’s really torture,” the labor leader said, his voice cracking.

“Why do you consider it ‘torture?’ Is it because you will always be with your wife (if you lose your job)?” Angara asked in jest.

Over the years, ABS-CBN Corp. has expanded to cable TV, international distribution, mobile services and magazine publishing. As of 2017, ABS-CBN had more than 60 subsidiaries.

Villanueva said it was clear to the employees that they would be left jobless if the TV station closed down.

Poe noted that it would be difficult for ABS-CBN employees to immediately transfer and find work in other networks.

Labor group Partido Manggagawa (PM) called on ABS-CBN to regularize its workers once its franchise is renewed.

“In the same vein, we assail ABS-CBN CEO Carlo Katigbak for refusing to commit to regularize all of its 11,071 workers as dared by Senator Hontiveros,” PM chair Wilson Fortaleza said in a statement.

The group said the company should treat as “kapamilya” (family) its 5,000 workers who are project-based or independent contractors by making them regular employees.

“In fact it is disingenuous for ABS-CBN to now express concern for its 11,071 workers but refuse to recognize employee-employer relationship when a few years ago contractual workers unionized in a bid to negotiate for improved wages and working conditions,” Fortaleza added.—With a report from Tina G. Santos