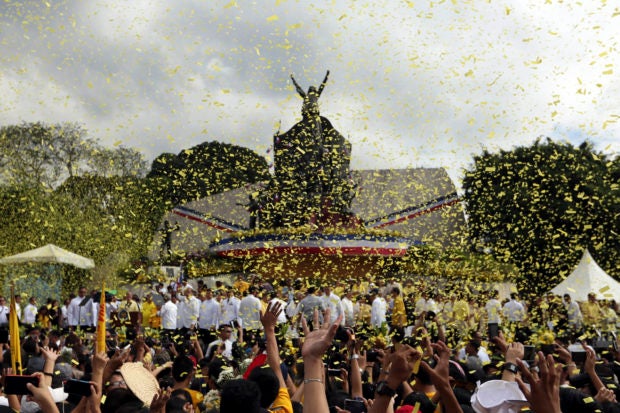 EDSA CELEBRATION Confetti rain during the celebration of the 30th anniversary of the Edsa People Power uprising at the People Power Monument in Quezon City in 2016.Many of the conditions that led Filipinos togather at thenational highway in protest 34 years ago have resurfaced today. —INQUIRER FILE PHOTO

MANILA, Philippines — Millennials too young to have directly experienced the abuses of Ferdinand Marcos’ dictatorship or yet unborn when he was ousted in 1986 face the challenge of reliving the spirit of Edsa in a time of anxiety, fake news and extrajudicial killings.

Rafael “Rapa” Lopa, president of the Cory Aquino Foundation and former executive director of the Philippine Business for Social Progress, said many of the conditions that led Filipinos to gather at the national highway in protest 34 years ago have resurfaced today.

But according to former Social Welfare Secretary Dinky Soliman, the task of bringing back true democracy could be a challenge because the generation being relied upon to do so is subjected to historical revisionism in an effort to erase Marcos’ ill deeds from the national consciousness.

Also, the 34-year gap bet¬ween the Edsa uprising and the current time is now longer compared to the 27-year distance between the end of World War II in 1945 and Marcos’ imposition of martial law in 1972—a situation some believe could make it difficult to revive the Edsa spirit.

Still, groups of young people like Akbayan Youth, Tindig Kabataan and the coalition Youth Resist have announced plans to rekindle the “Yellow Movement” that helped topple the dictatorship and regain democracy.

Lopa is a nephew of the late President Corazon Aquino, who used yellow as her campaign color when she ran against Marcos in the 1986 snap election.

He is the former executive director of the nonprofit Philippine Business for Social Pro-gress which helps provide links between business and local communities through poverty reduction and sustainable environment programs.

Tindig Pilipinas is hosting a Mass at Edsa Shrine at 12 noon.

Guardians of the truth

While it is understandable that millennials are engaged in their own priorities, “it doesn’t mean they don’t care,” Lopa told the Inquirer. “There are also a lot of them who take issues [against Marcos] very seriously … even if they did not live during those times. There is a lot of calling out right now, not only of the government, but even of leaders in the private and business sectors about how to undo the mistakes of the past.”

Lopa mentioned extrajudicial killings, corruption and the seemingly unwise choice of government appointees among the issues that concerned millennials today, which also disturbed Filipinos during the dictatorship.

“Remembering Edsa today is remembering what shouldn’t be. Another challenge is how we tell the truth. Right now there is an attack on the truth, here and globally. If people are fed with lies and become compromised, [these lies] become the basis for their choices,” he said.

“If people make choices based on the wrong facts, when the majority are fed with deception, their choices are going to be very dangerous,” he warned. “Therefore, it is very important we have to be guardians of the truth. If we allow fake news to win, magkakaproblema tayo (we’ll have a problem).”

Lopa also said social inequality continued to hound the majority of the population: “This is the second point which goes beyond the age level—a lot of our people feel that their lives have not significantly changed. There remains an inequality that needs to be addressed.”

In a separate interview, Soliman said the challenge faced by the new generation was how not to accept the current atmosphere as the norm and to turn the 1986 experience into a “compelling narrative” that would inspire people to seek change.

“The ones who will define how to communicate and define the narrative is really the young people now,” she said. “Even if we [who experienced Edsa in 1986] contribute our inputs, we cannot define it for them, given their [different] language and passion. This is the new challenge of the Edsa spirit. What would it mean to the young — the 20- to 25-year-olds, for example — at this point?”

Soliman was a community organizer before her stints in the Cabinet. She served as social welfare secretary of President Gloria Macapagal-Arroyo and was among the so-called “Hyatt 10” Cabinet members who quit en masse in 2005 due to supposed corruption in the administration. She was appointed to the same position by President Noynoy Aquino in 2010.

As convener of Tindig Pilipinas, Soliman joined the call of former officials of the 1986 Aquino administration to tie yellow ribbons on vehicles, houses and business establishments on Monday night — the eve of the commemoration of the Edsa anniversary — as a reminder of the need to return to a democratic government.

Soliman said a stumbling block facing millennials was the wrong information provided by history textbooks about Marcos and the true consequences of martial law.

“The young may not know the significance of Edsa because the history given to them is revisionist,” she said.

Still, Soliman said, there were welcome moves within the bureaucracy, such as the decision of immigration officer Allison “Alex” Chiong to expose corrupt bosses, indicating that “there are those willing to stick their necks out and say ‘I cannot be party to this anymore.’”

Soliman said the hesitation to openly support “bringing back democracy” would stem from the fear of being labeled “dilawan—or “yellow,” a derogatory term referring to supporters of the Liberal Party that was dominant before the Duterte administration. Or worse, be Red-tagged.

“Saying people are not focusing on the commemoration of Edsa is not completely true. But it does not get the attention it would usually get [because of] the Duterte administration,” she said.

But, she said, there was a “growing sentiment” of going back to the spirit of Edsa, being still a democracy: “Teka muna, balikan natin. ‘Di ba demokrasya tayo?”“During the Marcos time, it was a slow burn. It took [ex-senator Benigno Aquino Jr.’s] assassination to wake us up,” she said. “But now, the more atrocious and outrageous the action of the leadership, lalong nagigising ang mga tao (the more the people are awakened). People alive at that time see the parallelism now.”