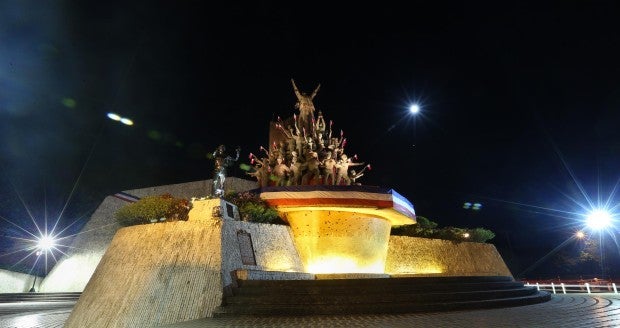 MANILA, Philippines — Even if Metro Manila cops have not monitored any threats, it will still be on “red alert status” on Tuesday, February 25, as the nation celebrates the 34th Edsa People Power Anniversary.

(We have not received any imminent threats from intel communities in NCR.)

(This is just preparation for any eventuality.)

Under the red alert status, all police personnel will be on standby and ready to be deployed. All work leave or day-offs of policemen will also be canceled. Likewise, NCRPO will conduct intensified checkpoint operations and patrols.

On the eve of the EDSA People Power anniversary, the Quezon City Police District (QCPD) was already placed on “red alert” or “full alert” status, while other police districts were on heightened alert status, which means police chiefs will initiate further security measures to preempt and prevent untoward incidents.

The entire jurisdiction of NCRPO will be on red alert status starting 4 a.m. on Tuesday, according to Sinas.

Police have identified four “areas of concern” where public assemblies are expected to take place to commemorate the world-famous bloodless uprising. These areas include the National Housing Authority, the Philippine Coconut Authority, the ABS-CBN compound, and Welcome Rotonda, all in Quezon City.

Aside from protest activities, a celebration program for the 34th anniversary of the Edsa People Power Revolution will occur from 7 a.m. until 10 a.m. Tuesday.

The 1986 EDSA People Power Revolution is a peaceful citizen’s action that eventually toppled the 20-year Marcos dictatorship and restored the nation’s democracy.

Annual remembrances of the EDSA People Power have been marked with gatherings of multi-sectoral groups mainly at the People Power Monument and in different parts of the country.

Read Next
NCRPO to deploy 2,500 cops for Edsa People Power commemoration
EDITORS' PICK
10 Filipinos positive for COVID-19 in UK, 7 in Ireland — envoy
Nograles: Cabinet members to donate 75% of monthly salary to aid COVID-19 fight
Quick chat with Nicole Andersson: ‘You really don’t need much to be happy’
IATF to LGUs: Issue ordinances vs attacks on frontliners, COVID-19 patients
Diokno to Duterte: OK to make fun of buck tooth, but focus on people’s needs first
Robredo spox thanks Duterte for defending VP’s efforts vs COVID-19
MOST READ
Coronavirus hotbed Rizal to shut borders on April 6
ADB warns PH against prolonged lockdown
Gov’t mulling quarantine period extension of 15-20 more days
Sotto on Isko Moreno’s call: We do our job without the media following our every move
Don't miss out on the latest news and information.