Filipino-Americans ‘fired up’ as Tagalog added to Nevada ballot 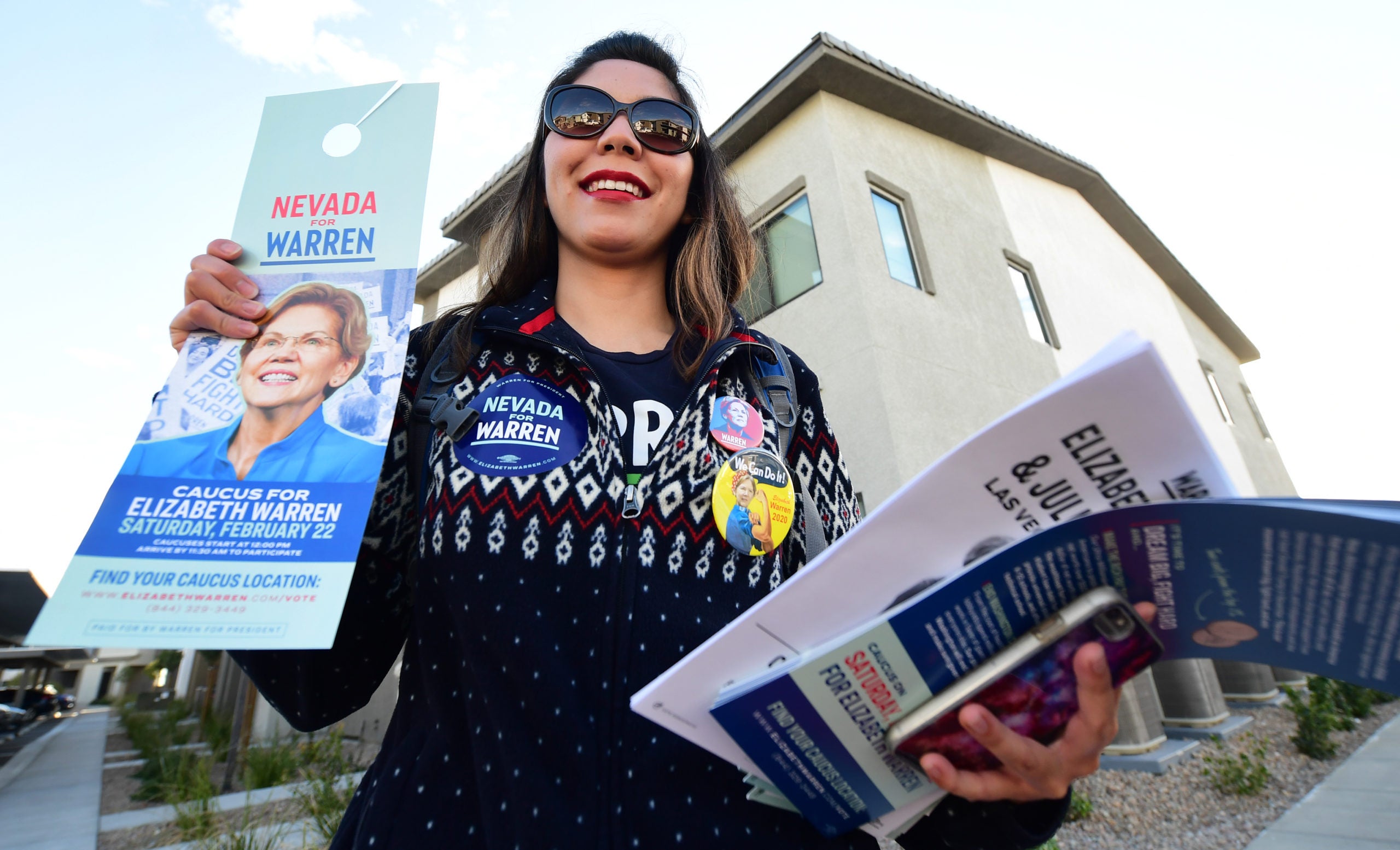 Elizabeth Warren supporter Ninna Diaz poses with material she will distribute while out knocking on doors of registered Democrats and Independents to make sure people are registered to vote on February 21, 2020 in Las Vegas, Nevada. – Manny Pacquiao, roast pig dinners and prayer services: Activists are using every tool possible to get the booming Filipino-American community in Las Vegas to the polls for Saturday’s Democratic nomination vote. (Photo by Frederic J. BROWN / AFP)

LAS VEGAS — Manny Pacquiao, roast pig dinners and prayer services: Activists are using every tool possible to get the booming Filipino-American community in Las Vegas to the polls for Saturday’s Democratic nomination vote.

Overlooked in the past, Filipinos have rapidly become the western desert state’s largest Asian-American community — almost 200,000 by some estimates, in a state of three million people — forcing candidates to take notice.

For the first time, the Tagalog language will be used on voting cards along with English and Spanish at the Democratic caucuses.

“We’re proud that they are recognizing us,” said Margie Gonzales, a Filipina community leader. “It means a lot — it means recognition.”

“When you start knocking on doors, it helps if you greet a Filipino family opening the door in Tagalog,” she said. “That’s a way to make that person smile — you feel welcome.”

Feeling welcome is key for a minority community in which immigration and xenophobia are major concerns. Like Latinos, Filipino-Americans tend to vote Democrat.

“When Trump talks about not bringing in relatives and things like that, that same thing applies to Asians,” said Tick Segerblom, a commissioner for Clark County, where Las Vegas is located. “So Trump has really been a boon as far as organizing Asians.”

But traditionally Filipino-Americans have not voted in large numbers.

To counter that, Gonzales and her fellow activists introduced a tradition commonly found during election campaigns back in the Philippines — the Kamayan, a large communal feast.

These typically see politicians mingle at long tables covered in banana leaves, with a whole roast pig on the menu.

‘Squeak of a mouse’

The feasts hosted in Las Vegas by Gonzales so far have not endorsed specific candidates. A grand Kamayan is planned once the Democratic Party settles on a nominee — but that has not stopped those in the race from reaching out.

Democratic candidate Tulsi Gabbard, who is Hawaiian, has made inroads, as have Pete Buttigieg and Elizabeth Warren.

“This is an overlooked and often ignored community and I feel like Elizabeth Warren celebrates our existence and doesn’t use us as props,” said Filipina campaign volunteer Ninna Diaz, 27.

The community is “definitely taking notice,” she added.

More recently, Gonzales has conducted Tagalog-language caucus training for campaigns including that of Bernie Sanders.

“The mere fact that a lot of politicians are calling me and other Filipino-American leaders, it shows you that we are becoming important,” she said.

“They are paying attention to us, because they know now that we vote.”

She added: “Our voice used to be like the squeak of a mouse… But we are getting fired up now.”

In a sign of the group’s growing visibility, Segerblom and others are leading a campaign to rename a stretch of eastern Las Vegas, which is home to many community restaurants and stores, Little Filipinotown.

But Gonzales turned to one of the most visible icons of all — global boxing superstar and Philippines Senator Manny Pacquiao, who was in Las Vegas for a fight in 2014.

“We were able to get to his suite — he posed with us, holding our banner,” said Gonzales, who now uses the image to boost voter registration drives.

“It gets the Filipinos excited — in fact, even non-Filipinos!”