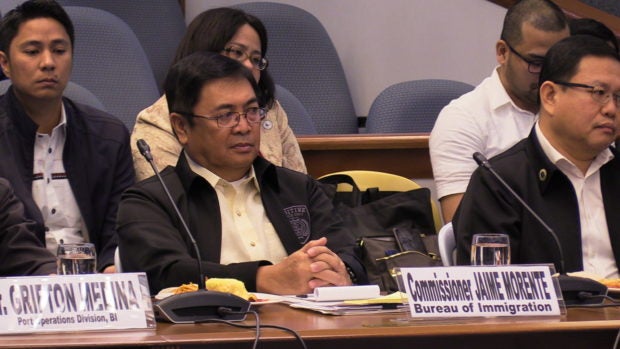 Bureau of Immigration Commissioner Jamie Morente attends Senate inquiry on the so-called “pastillas” scheme for POGO workers within his agency on Thursday, February 20, 2020, at the Senate in Pasay City. INQUIRER.NET/CATHY MIRANDA

MANILA, Philippines — Although President Rodrigo Duterte has stood by Bureau of Immigration (BI) chief Jaime Morente, Malacañang on Friday clarified this does not mean he will be automatically spared from relief amid the investigation into the so-called “pastillas” scheme.

Presidential spokesperson Salvador Panelo said that despite the President’s friendship with Morente, this does not spare him from being fired if proved he did something “illegal.”

This, despite the President personally vouching for Morente, who was a former city police director in Davao city.

(Yesterday I terminated all Immigration personnel under Morente. Apparently, I love Morente because he once served as chief of police here. He’s kind.)

Duterte likewise ordered the relief of all Immigration officials involved in the alleged “pastillas” scheme, where personnel receive kickbacks in exchange for entry of Chinese nationals.

Panelo emphasized that the President had previously fired officials even though they are friends or allies.

(There’s no connection between our friendship and your job. Your job is different.)

Panelo added that the case of Morente and how he ran the BI will be discussed in the next Cabinet meeting.

During a Senate probe on crimes involving Philippine overseas gaming operators (Pogo), Senator Risa Hontiveros bared that an arriving Chinese national shell out a P10,000 service fee, of which P2,000 will be divided among officials of the BI’s Travel Control and Enforcement Unit, duty Immigration supervisor, and terminal heads.

The scheme was called “pastillas” supposedly because the bribe money would be rolled in a bond paper like the wrapping of the Filipino milk candy of the same name.