‘Bilog’ to wait for arraignment at Bagong Diwa 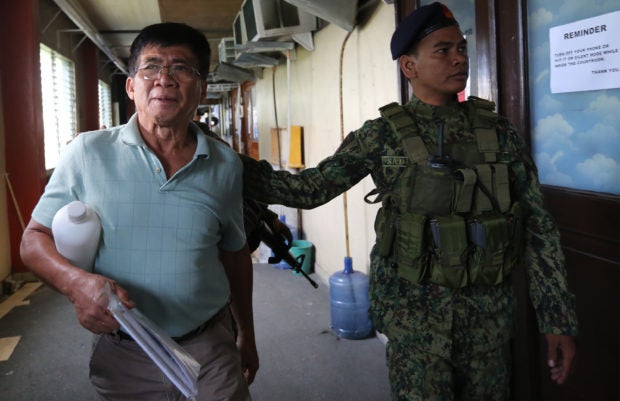 COURT APPEARANCE A policeman escorts Rodolfo Salas, the former chair of the Communist Party of the Philippines, during his court appearance in Manila. —JOAN BONDOC

CITY OF SAN FERNANDO—A court in Manila on Thursday enforced its previous order committing Rodolfo Salas, former chair of the Communist Party of the Philippines (CPP), to a jail in Metro Manila for his arraignment on three cases related to the “Inopacan massacre” in Leyte province in 1985.

Salas, 72, was transferred to Camp Bagong Diwa in Taguig City after Central Luzon policemen presented him to the Manila Regional Trial Court Branch 32, according to his son Jody. Judge Thelma Bunyi-Medina issued the commitment order.

Jody said his father refused to be jailed in Metro Manila and asked to be returned to Camp Olivas in Pampanga province where he had been held after he was arrested on Tuesday morning in his home in Barangay Balibago in Angeles City.

But the court cited the Feb. 28 arraignment in which Salas can accept or deny the charges.

Salas had doubted the authenticity of the arrest warrant and questioned the absence of a search warrant in his house where police reportedly seized a gun and several bullets.

Jody said his father would not leave a gun and bullets lying around the house as children aged 9 and 8 also lived there. He also denied that his father went in hiding as Salas had lived in the Angeles home for 10 years. He even set up a cooperative in the area.

“After he was released [in the 1990s], he did not involve himself [in the CPP]. He did not side with anyone. He raised us kids. He put up a cooperative because he wanted to help people. He wanted to provide jobs. These are most of the things he did in Pampanga after his release,” Jody told reporters outside the court.

On Wednesday, Salas waived his rights to inquest proceedings so he could immediately challenge in court a case for illegal possession of firearms.

Salas, also known as “Kumander Bilog,” said his arrest was presented as an accomplishment of the police in carrying out President Duterte’s Executive Order No. 70 on ending of the local insurgency.

But Salas insisted he had been inactive in the revolutionary movement in the last 28 years and had severed ties with the CPP and New People’s Army after he served time from 1986 to 1992 for rebellion.