MANILA, Philippines — The immigration officer who blew the whistle on the alleged corruption in the entry of Chinese into the country has identified former officials and current employees of the Bureau of Immigration (BI) in the so-called “pastillas” racket.

According to Allison Chiong, who surfaced Thursday at the Senate to testify on the corruption scheme, BI’s former officials and present personnel are the ones leading “syndicated groups” that facilitate the smooth entry of Chinese who arrive in the county mostly to work in Philippine offshore gaming operations (POGOs).

Senator Risa Hontiveros early this week bared the scam, wherein immigration officers and employees allegedly give “VIP treatment” to Chinese who cough up P10,000 each for their seamless entry. Hontiveros said Chiong is her informant.

“Immigration officers received, through a group chat in the Viber application, a list of names of Chinese nationals who were to be allowed entry into the Philippines without going through the usual immigration process,” Chiong said in his sworn affidavit, which he read during the Senate probe.

“News of the operation spread fast. This time, other syndicated groups within the Bureau of Immigration started submitting their own list of names of Chinese nationals,” he also said. 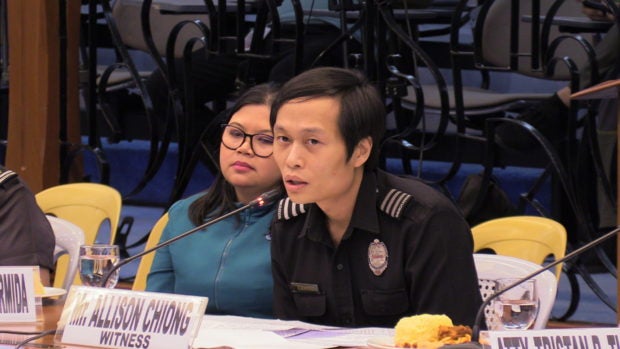 Immigration Officer I Allison “Alex” Chong surfaces at the Senate to testify on the alleged “pastillas” scheme within the Bureau of Immigration (BI). INQUIRER.NET PHOTO/CATHY MIRANDA

Chiong claimed these groups work with China-based travel agencies, where the names of the entering foreign nationals emanate.

“The syndicated groups would often compete with each other to gain favor from the Chinese travel agencies,” he said.

These syndicated groups were headed by different personalities within the bureau, he added.

Chiong further alleged that former Travel Control and Enforcement Unit (TCEU) heads Bien Guevarra, Glenn Comia, and Den Binsol still maintain the operations of their purported syndicated groups “despite being no longer working with the bureau.”