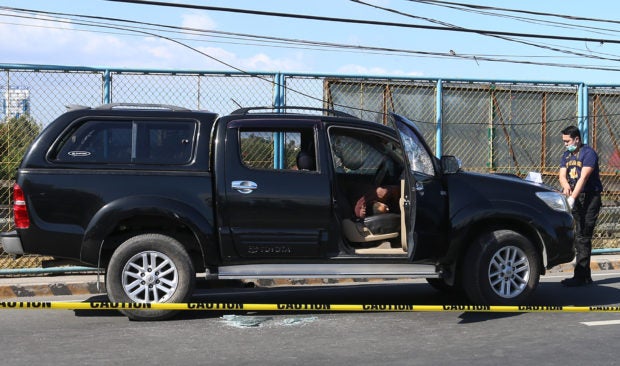 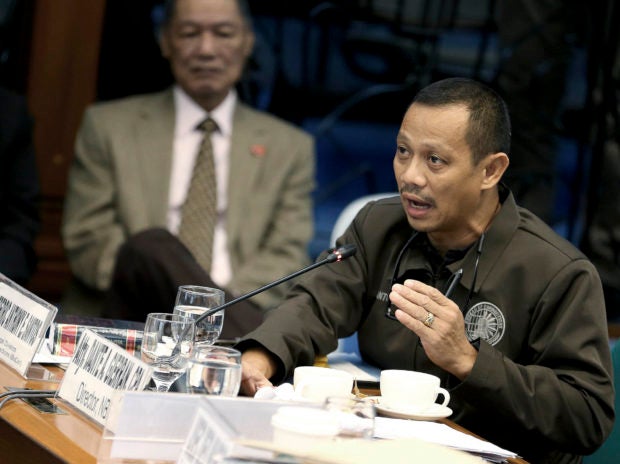 TWO-MAN HIT JOB The police said Fredric Anthony Santos, the suspended chief of the Bureau of Corrections’ legal division, was just a few meters from the gates of Southernside Montessori School where he was to fetch his daughter when he was shot at close range by two men on separate motorcycles, one following him and other coming from the opposite direction. —EDWIN BACASMAS/MARIANNE BERMUDEZ

MANILA, Philippines — The suspended chief of the legal division of the Bureau of Corrections (BuCor) who was linked to irregularities in the good conduct time allowance (GCTA) credits for convicts was gunned down on Wednesday close to New Bilibid Prison (NBP) in Muntinlupa City.

Lawyer Fredric Anthony Santos was aboard his black Toyota Hilux pickup when he was shot and killed by two assailants along Katihan Road in Barangay Poblacion at around 1:50 p.m.

He was hit at least four times in the head and twice in his body, according to crime scene investigators.

The police said Santos was just a few meters from the gates of Southernside Montessori School where he was to fetch his daughter when he was shot at close range by two men on separate motorcycles, one following him and other coming from the opposite direction, police said. The gunmen fled immediately.

Police said the dash camera in Santos’ vehicle had not recorded the attack. The three closed-circuit television came­ras in the area where the ambush took place were not functioning, according to the Muntinlupa City government.

Police said they were investigating the motive for Santos’ killing and were on the hunt for the gunmen.

Santos and 29 other BuCor officers and personnel were placed on a six-month preventive suspension by the Office of the Ombudsman in September last year for allowing the questionable release of convicts in violation of Republic Act No. 10592, or the GCTA law.

Santos’ killing will not hamper the government’s campaign against corruption, including efforts to clean up the national penitentiary, presidential spokesperson Salvador Panelo said.

“We condemn any act of vio­lence. We’re always like that. As a matter of policy, we condemn all transgressions of law, any violation inflicted against any person, any murder, we condemn that,” he said.

But he added that the authorities did not know “exactly whether or not this is a personal case, meaning it might be a retaliation for some personal wrongdoing he has committed.”

But if the killing was in relation to Santos’ work, “it will not thwart or stop the campaign against corruption because people there will always be coming out to tell the truth,” he said.

“This is ignominy. It is a rubout and not just a vindictive crime alone. It is a warning to all that if you know something about a crime that happened, you will be killed,” he said.

“I am saddened that this is still happening in our country. Since 2011, (Santos) is already the 15th BuCor personnel murdered just outside the (state penitentiary),” he said.

The GCTA law drew controversy in August 2019 after Guevarra announced that Antonio Sanchez, former mayor of Calauan, Laguna province, and convicted rapist and murderer, may be released together with over 10,000 inmates due to good conduct.

But public outrage blocked Sanchez’s release and prompted the Senate to investigate the GCTA.

During the Senate hearing on Sept. 9, Santos said he had informed Faeldon about Department Order No. 953, which requires prior approval of the secretary of justice before an inmate imprisoned for 40 years or more was to be released.

Faeldon vehemently denied that he was informed about the department order by Santos, who later said he could not remember if he had indeed informed the BuCor chief.

But Faeldon admitted in a previous hearing that he did not seek clearance from Guevarra before signing the release order of heinous crime convicts.

Santos also told the sena­tors about the corruption at NBP as guards developed close ties with the inmates. He said an “unholy” alliance would eventually be formed over various favors and guards would be transferred when officials suspect that they were compromised.

Only a few inmates were prepared to break the code of silence, and those who “sing” could end up dead in their sleep or hanging in their cell, he added.

On Sept. 12, Santos was cited in contempt by the justice and human rights committee for evading the questions of the senators.

On Feb. 5, 2020, 17 senators recommended the filing of graft and corruption cases against Faeldon in connection with the GCTA mess.

According to BuCor spokesperson Gabriel Chaclag, Santos was supposed to return to his post on March 12.

He said there was “low morale” among the BuCor personnel following the latest killing of an officer of the bureau.

“There’s anxiety and our people were fearful of their lives since there was no information on the suspects, there’s no motive,” he added.

BuCor had asked its personnel to exercise “due diligence … especially if they were involved in issues in the past.”

The agency had launched patrols inside the NBP reservation, and coordinated with the Muntinlupa police to secure the area outside the prison complex.

Chaclag said they would have their own parallel investigation, and they were ready to cooperate with authorities in conducting their own probe.

Five other BuCor personnel had been killed quite recently by unknown gunmen in Muntinlupa’s Barangay Poblacion. —WITH REPORTS FROM MARLON RAMOS, LEILA B. SALAVERRIA AND INQUIRER RESEARCH INQ