Girl, 6, was killed by neighbor who then killed self -- police | Inquirer News

Girl, 6, was killed by neighbor who then killed self — police 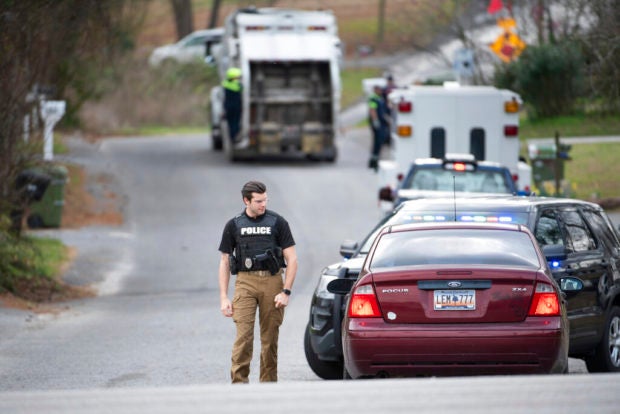 COLUMBIA, S.C. — A 6-year-old girl who disappeared from her front yard after school was killed by a neighbor who then killed himself, authorities said Tuesday.

Faye Marie Swetlik died of asphyxiation just hours after she was abducted, Lexington County Coroner Margaret Fisher told reporters Tuesday, refusing to say if she was strangled or suffocated.

Faye’s body was found nearly three days later in woods near her home and had been put there just hours earlier, Fisher said.

Between that time, investigators had spoken with the suspect. Coty Scott Taylor let them search his home a few doors down from the girl. They saw nothing to suggest the girl was ever there, Cayce Public Safety Director Byron Snellgrove said.

Reporters asked Snellgrove if investigators knew where the girl was. “We do not know at this time,” Snellgrove said.

Shortly after the girl’s body was found, authorities said, they were called to Taylor’s home where he was found dead on his back porch, covered in blood.

Taylor, 30, slit his own throat, Fisher said in a statement released after Tuesday’s news conference, in which the coroner only wanted to talk in front of cameras about the girl.

Fisher also refused to release any details about the condition of the girl’s body or disclose any other way she might have been injured out of respect for her family.

Snellgrove also didn’t talk about why Taylor, with no criminal record, would have kidnapped the girl. He said last week thatTaylor didnot know the girl or her family.

“DNA was tested and did connect and link the residence, the deceased male and Faye to that location,” Snellgrove said.

The girl was last seen alive playing in her Cayce front yard after getting off the school bus on Feb. 10. More than 200 officers searched over three days for her, knocking on every door in her neighborhood and checking every vehicle going in and out.

They knocked on Taylor’s door, too, the day before he killed himself, Snellgrove said.

“He was cooperative and gave consent to agents to look through the house. Those agents did not see anything that alerted them to believe he had knowledge or was in any was involved in Faye’s disappearance at that time,” Snellgrove said.

The clue that cracked the case came from a trash can. Investigators followed a trash truck going around the neighborhood Thursday and sifted through every can as it was emptied. Inside Taylor’s can, Snellgrove said, they found a rain boot matching one Faye was wearing and a ladle full of dirt.

Snellgrove said he ordered a search near the area and personally found the girl’s body which was “moved in shadow of the night.”

Taylor had a roommate who was not home much while the girl was missing, said Snellgrove, adding the roommate appeared to know nothing about the abduction.

“It appears (Taylor) is the sole perpetrator of the crime,” Snellgrove said of Taylor.

The girl’s disappearance shocked Cayce, a town of about 13,000 just west of Columbia, the state capital. Several prayer vigils were held while she was missing and after her body was found.

More than 100 people came out in pouring rain for a candlelight vigil Tuesday evening at Cayce City Hall. Many wiped away tears as Snellgrove lit the first candle and city council members passed the flame around.

Snellgrove appeared to choke up while announcing the girl’s death just hours after finding her body.

“This was not just an investigation or a case to us. Faye Swetlik quickly grabbed all of our hearts,” Snellgrove said Tuesday.

The girl had started school at Springdale Elementary in August and made an immediate impact, bringing sunshine as she bounded into school for breakfast and finding a bunch of friends, Principal Hope Vrana said at the vigil.

“Everyone quickly grew to love her smile, her joyful spirit and her very kind heart,” Vrana added.

A public memorial for Faye will be held at 7 p.m. Friday at Trinity Baptist Church in Cayce.

Fisher said her heart broke for the girl’s family, who lost a child as she simply played in her front yard.

“You and Faye will remain in my heart forever,” the coroner said.