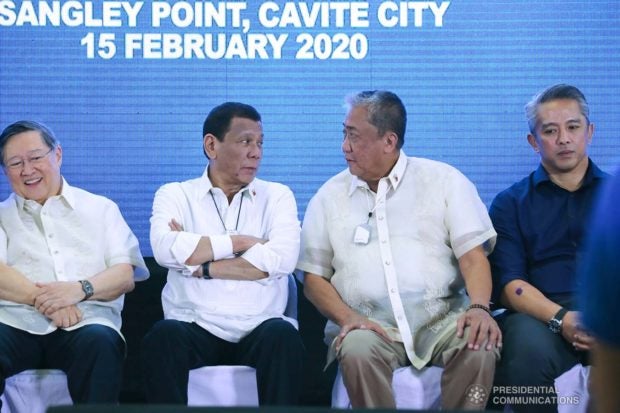 MANILA, Philippines — President Rodrigo Duterte’s health again came into question after he was seen with what appeared to be a white bandage or medical plaster on his right forearm at an event in Cavite City last February 15.

Duterte was keynote speaker during the inauguration of Sangley Airport Development Project and presentation of the Sangley Point International Airport Project in the city.

A photo released by Malacanang likewise showed the president wearing the wide white armband, which presidential spokesperson Salvador Panelo passed off as a “symbol of peace.”

“No, it’s not a medical plaster,” Panelo said in a press briefing. “That’s more symbolical of his wanting peace in the Philippines.”

Panelo did not explain why the President had to wear a peace symbol during that event. However, he assured there is no need to worry about the President’s health.

“You know, the President will tell us if he is not feeling well. He tells us… wala ngang tinatago ‘di ba? Lahat sinasabi niya sa atin,” he said.

Prior to February 15, Duterte’s last public appearance was on February 12 during the oath taking of KBP officers and board of trustees inside Malacanang, during which time he was not wearing an arm band.

Duterte’s state of health has been a recurring issue in his presidency due to his sporadical absence in a number of public engagements.

He also admitted publicly that he has, among other things, Buerger’s disease and Barrett’s esophagus, and that he had been experiencing occasional headaches.