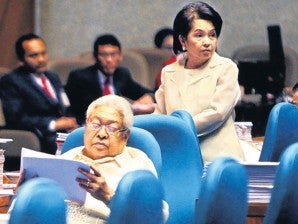 In a sign of dissension within the minority bloc in the House of Representatives, Albay Representative Edcel Lagman on Thursday accused former President and Pampanga Representative Gloria Macapagal-Arroyo and some of her allies of plotting to oust him as minority leader.

He described himself as an “ally” of Arroyo but not a “stooge.” Lagman claimed the plot to remove him as chief of the 29-strong minority bloc was discussed at an emergency meeting called by Arroyo in her hospital suite at Veterans Memorial Medical Center in Quezon City on Wednesday night.

Asked if he was saying that Arroyo was behind the purported plot to oust him as minority leader, Lagman said: “Of course, GMA (Arroyo) was the one who called them to the meeting.”

He said those present at the meeting were Quezon Representative Danilo Suarez, Leyte Representative Martin Romualdez and Occidental Mindoro Representative Amelia Villarosa. He referred to the three as the former President’s “constant traveling companions.”

Arroyo is under hospital arrest while facing charges of sabotaging the 2007 senatorial elections to favor her administration’s candidates. She denies the charges.

Reached for comment, Suarez cited what he said was a  term-sharing agreement the minority lawmakers entered into in 2010 and that Lagman was reminded of it last month.  The Philippine Daily Inquirer tried to reach the two other lawmakers but could not contact them.

A statement issued by Lagman’s office said: “GMA and her constant traveling companions in her past foreign trips are plotting to replace Minority Leader Edcel C. Lagman with Quezon Rep. Danilo Suarez.”

The statement said: “Although Lagman is perceived to be an ally of GMA in the opposition, he is not a GMA stooge and does not succumb to her bidding.”

Interviewed later by the Inquirer, Lagman said that although he worked closely with Arroyo in Congress, he remained “independent-minded” and was “never part of her inner circle.”

“Maybe Suarez could be more malleable,” he said.

Lagman belongs to Lakas, while Suarez and the two lawmakers  belong to Arroyo’s Kampi.

Lagman, in his press release, insisted the term-sharing agreement was limited to the speakership position should the Lakas-Kampi-CMD coalition win the House leadership but it did not extend to the minority leader post.

He said that agreeing to term sharing for the minority leadership would have sent defeatist signals to the others since Lakas-Kampi was then fighting for the speakership.

Lagman also said news accounts at the time confirmed the limited extent of the agreement. He also said that “an absolute majority of the minority members” had signed a resolution retaining him as minority leader for his “responsible and credible stewardship of the minority.”

Told that the Arroyo camp had said, through spokesperson Elena Bautista-Horn, that they “have nothing to do” with the minority leadership issue,  Lagman said: “That’s impossible that they didn’t know anything. Pinapunta sila ni GMA (GMA called for them). They’re just washing their hands.”

“What I think is that it’s a deeper alliance with Danny Suarez who used to be a traveling companion of GMA,” Lagman said.  “From the very start, I was not close to GMA… I was never part of her inner circle, unlike Suarez, Romualdez and Villarosa, the three traveling companions.”

Asked why Arroyo would want him ousted, Lagman said that “she is unable to appreciate quality and commitment.”

Suarez, for his part, recalled that at the end of the House session in December, he approached Lagman to ask if the latter had any last minute instructions for him and if there were any bills he wanted pushed.

He said he was surprised and “offended” when Lagman told him that the other members of the minority should first be consulted on the matter of the group’s leadership.

“I’m very sad that it had to go this far,” Suarez told the Inquirer.

Suarez said 19 minority members met last month to discuss the matter and that “after the meeting, all 19 approached both of us and said we should honor the term-sharing agreement.”

“But Edcel said,  ‘Hindi naman tayo kumpleto eh’ (But not all of us are here),” Suarez said.

The minority bloc consists of 29 lawmakers.

Asked if he would force the issue in July during the election for the House minority leadership, Suarez said he hoped things would be settled by then. He said he and the other minority members would let Lagman know in writing their wish that he relinquish the minority leader post.

“I’ve been very satisfied with the way Edcel has been handling the minority for the last year and a half. But an agreement is an agreement. He should honor it,” Suarez stressed.

But Lagman pointed out that the opposition caucus last December that Suarez  was referring to opted not to take a vote on the minority leadership issue owing to the absence of many members and that the prevailing consensus was not to bring the issue to a vote.

A six-term congressman and former human rights lawyer, Lagman is chairman of Lakas-CMD and vice president of Centrist Democrats International (CDI), a worldwide organization of Christian and Muslim political parties. He used to chair the House committees on appropriation, justice, agrarian reform and overseas workers affairs.

Lagman’s press release said he had also been recognized “for articulating alternative and critical views on relevant issues, like good governance, human rights, the rule of law, agrarian reform, the budget and the economy.”