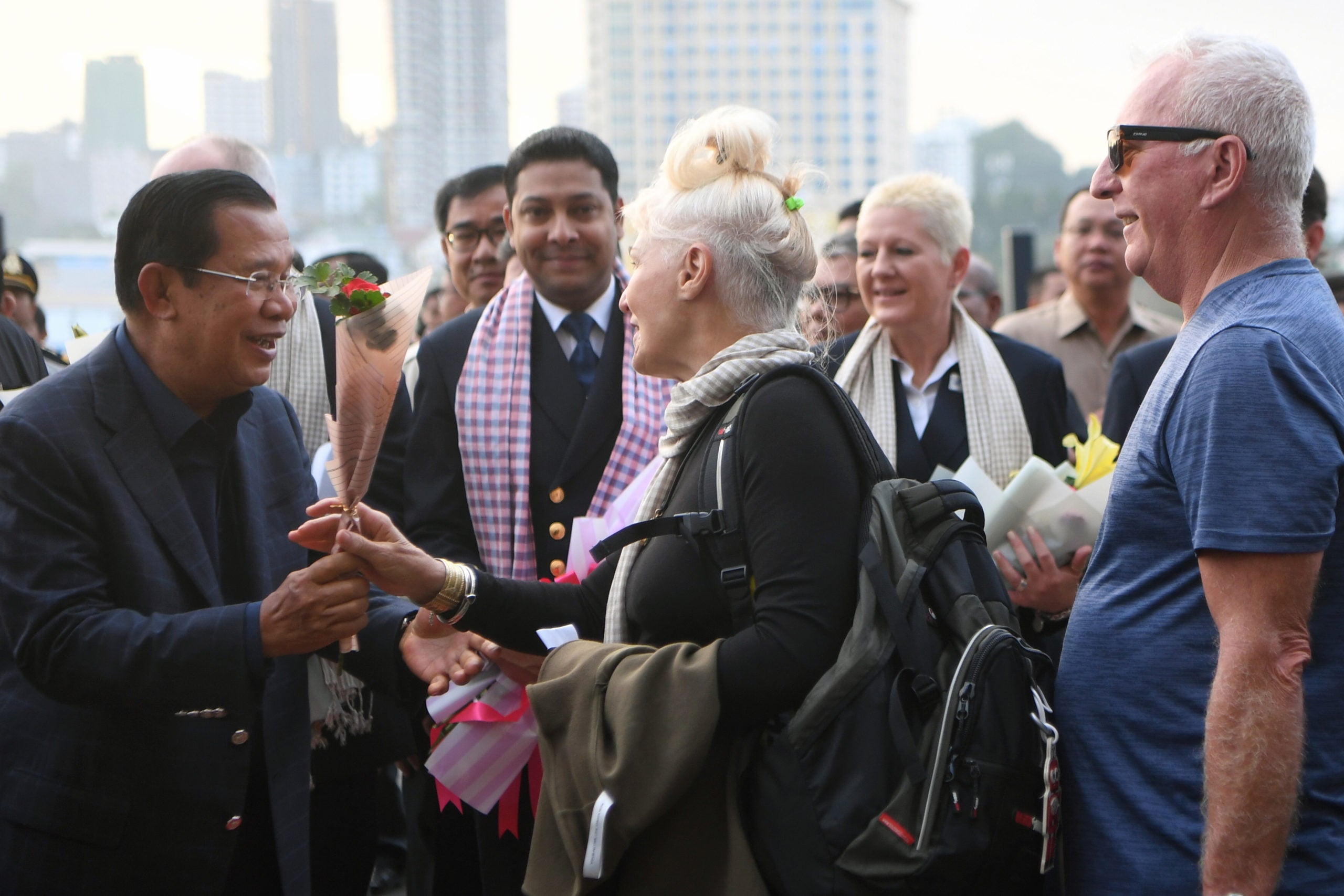 Cambodia’s Prime Minister Hun Sen (L) meets passengers who disembarked from the Westerdam cruise ship in Sihanoukville on February 14, 2020, where the liner docked after being refused entry at other Asian ports due to fears of the COVID-19 outbreak. – Cambodia’s strongman premier Hun Sen welcomed on February 14 the passengers of a U.S. cruise ship blocked from several Asian ports over fears of a deadly new virus. (Photo by TANG CHHIN Sothy / AFP)

SIHANOUKVILLE, Cambodia — Cambodia’s strongman premier defended on Tuesday his decision to allow a U.S. cruise ship to dock despite at least one passenger later being diagnosed with the deadly coronavirus, while authorities scrambled to track down hundreds that came in contact with her.

The Westerdam was turned away by several Asian ports before Cambodia agreed last week to allow its more than 2,000 passengers and crew to disembark.

But jubilation dimmed over the weekend when an 83-year-old American woman was stopped at a Malaysian airport and diagnosed with the virus that originated from China and has now killed over 1,800 people.

By the time she was diagnosed, scores of fellow passengers had moved through different countries — including Singapore and Thailand.

Four are currently being monitored in Bangkok.

“Some people say it brings the virus to Cambodia, but Cambodia has not had the disease (among its people),” he said in a speech.

Cruise operator Holland America said tests for 406 passengers now at a Phnom Penh hotel were negative, and they could continue their journeys home.

For those who’ve made it to the United States, local health departments — working with the U.S. Centers for Disease Control — are following up with passengers who might have had contact with the infected American, it added.

Three hundred passengers in Phnom Penh would fly to Dubai, Hun Sen said, while 100 others would take a chartered flight to Japan.

Authorities are also arranging another flight for passengers remaining in Sihanoukville — the southern coast where the Westerdam is docked — though Hun Sen did not say where that was headed.

The bombastic premier had greeted disembarking passengers on Friday with embraces and flowers.

As countries in the region scrambled Monday to restrict access to Westerdam’s passengers, those in Phnom Penh were taken on a tour of the capital under the glare of state-aligned media.

Almost a thousand people remain onboard the Westerdam, barred from leaving until they have been tested.

Passenger Lorraine Oliveira told AFP she is apprehensive about the results.

“I’m worried what the outcome will be if anyone on board tests positive — what will happen to us then?” she said.

Cambodia only has one confirmed case of the virus — a Chinese tourist who has since recovered.

The country, a staunch ally of Beijing, received billions of dollars in soft loans and investment from China, and Hun Sen traveled there earlier this month in a show of solidarity.