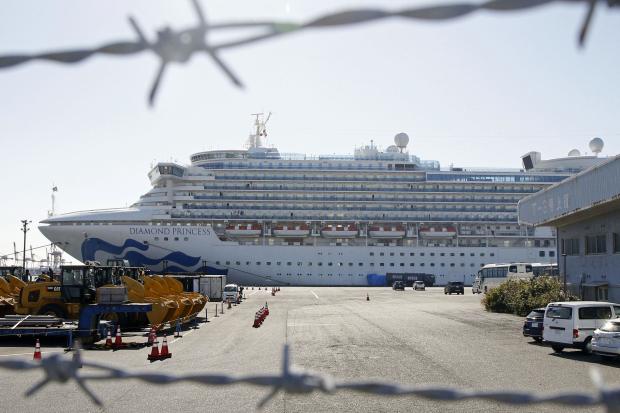 The quarantined ship Diamond Princess is pictured through barbed wire at Yokohama port in Yokohama, near Tokyo Monday, Feb. 17, 2020. Japanese officials have confirmed 99 more people infected by the new virus aboard the ship, the Health Ministry said Monday. (Photo by MAYUKO ISOBE / Kyodo News via AP)

TOKYO — All passengers and crew onboard a ship quarantined off Japan have now been tested for the new coronavirus, the government said Tuesday, as more countries moved to evacuate citizens from the boat.

South Korea became the latest to announce it would remove its citizens from the Diamond Princess, where more than 400 people have tested positive for COVID-19.

Japan has faced criticism for its handling of the situation, with dozens of new infections detected almost daily since the ship arrived in early February.

But it has defended its approach and health minister Katsunobu Kato insisted again Tuesday that passengers who test negative will be allowed to leave the ship from Wednesday.

“We have done tests for everyone (on the ship),” he told reporters.

“Some results have already come out… and for those whose test results are already clear, we are working to prepare disembarkation from the 19th,” he said.

Kato said the process would last two or three days.

But those who had close contact with people who have tested positive will have their quarantine reset to the date of their last contact with an infected person.

The crew is also expected to remain to observe another quarantine period after the last passengers leave the ship.

So far, the United States, Canada, Australia, Hong Kong and now South Korea have said they will evacuate their citizens from the ship.

South Korea will send a presidential aircraft on Tuesday to fly back four nationals and one Japanese spouse, an official told reporters.

There are 14 South Koreans on board in total, but the other 10 have declined to be evacuated from the ship because they live in Japan, the Yonhap news agency reported.

Early Monday, more than 300 Americans were evacuated from the ship, among them over a dozen who have tested positive for the virus.

The Americans, like citizens from other countries being evacuated from the ship, will have to undergo another 14-day quarantine.

Canada said Tuesday it had “secured a chartered flight to repatriate Canadians on board the Diamond Princess” but gave no details on when the process would take place.

There were 256 Canadians on board the ship, with 32 so far testing positive for the virus.

While foreign governments have couched their decision to remove citizens as an attempt to reduce the burden on Japanese authorities, many have interpreted the evacuations as a criticism of Tokyo’s handling of the situation.

The U.S. and Australia have told citizens that if they decline repatriation and an additional 14-day quarantine, they will not be allowed home for at least two weeks, suggesting they do not believe the ship-based quarantine has worked.

At least 454 people on the ship have so far tested positive for the virus and been removed to local hospitals for treatment.

Japan has also confirmed at least 65 cases domestically, including many involving people with no history of recent travel to China.

Authorities have said the virus is being transmitted locally now, and have asked citizens to avoid crowds and non-essential gatherings.

On Monday, the amateur portion of the Tokyo Marathon, which had been expected to attract some 38,000 runners, was canceled. Only elite athletes will now be able to take part.

The public celebration for Emperor Naruhito’s birthday has also been scrapped over virus fears.