Chinese health report says 80% of virus cases have been mild

Health officials in China have published the first details on nearly 45,000 cases of the novel coronavirus disease that originated there, saying more than 80% have been mild and new ones seem to be falling since early this month, although it’s far too soon to tell whether the outbreak has peaked. 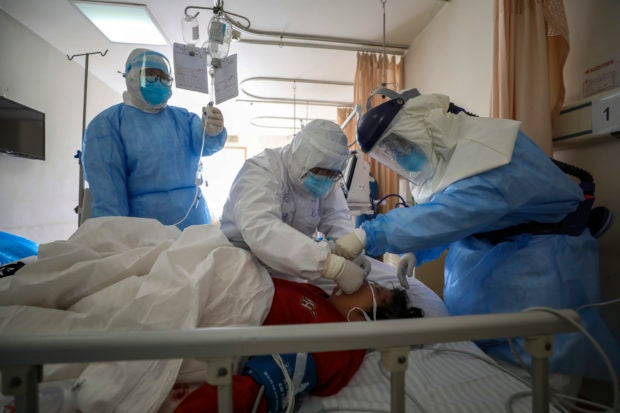 In this Sunday, Feb. 16, 2020, photo, medical workers provide treatment to a new coronavirus patient at a hospital in Wuhan in central China’s Hubei province. Chinese authorities on Monday reported a slight upturn in new virus cases and hundred more deaths for a total of thousands since the outbreak began two months ago. (Chinatopix via AP)

Monday’s report from the Chinese Center for Disease Control and Prevention gives the World Health Organization a “clearer picture of the outbreak, how it’s developing and where it’s headed,” WHO’s director-general said at a news conference.

“It’s too early to tell if this reported decline will continue. Every scenario is still on the table,” Tedros Adhanom Ghebreyesus said.

The new disease, called COVID-19, first emerged in late December in Wuhan, the capital of China’s Hubei province, and has spread to more than two dozen other countries. China says more than 70,000 people have been infected and 1,770 have died in mainland China, but numbers are squishy because the country is counting many cases based on symptoms rather than the methods WHO uses.

The new study reports on 44,672 cases confirmed in China as of Feb. 11. The virus caused severe disease such as pneumonia in 14% of them and critical illness in 5%.

That’s lower than for SARS and MERS, two similar viruses, but COVID-19 ultimately could prove more deadly if it spreads to far more people than the others did. Ordinary flu has a fatality rate of 0.1% yet kills hundreds of thousands because it infects millions each year.

Cases seem to have been declining since Feb. 1, but that could change as people return to work and school after the Chinese holidays, the report warns.

Also Monday, Chinese officials said they may postpone the country’s annual congress in March, its biggest political meeting of the year. The standing committee for the National People’s Congress said it believes it is necessary to postpone the gathering to give top priority to people’s lives, safety and health, the official Xinhua News Agency reported.

The standing committee said it would meet Feb. 24 to deliberate on a postponement. The meeting is due to start March 5.

Japanese officials, meanwhile, confirmed 99 more people were infected by the new virus aboard the quarantined cruise ship Diamond Princess, bringing the total to 454. The Health Ministry said it has now tested 1,723 people on the ship, which had about 3,700 passengers and crew aboard. Outside China, the ship has the largest number of cases of COVID-19.

Four of the Americans who tested positive for the virus were taken to California hospitals. Ten others, along with three spouses, were flown to Omaha, Nebraska, to get care at the University of Nebraska Medical Center, officials said.

Chris Kratochvil, an official at the Nebraska medical center, said 12 are in quarantine with no current symptoms. One man is in a different area getting a higher level of care because he had a cough and other symptoms plus a chronic illness that raises his risk for complications. All will remain at the university hospital for at least 14 days.

During the flights, t he 14 cruise passengers who tested positive for the virus were placed in isolation in the tail of the planes, said William Walters, director of the State Department’s operational medicine staff, a unit created to respond to emergencies such as those requiring large-scale evacuations.

Walters said none of the 14 showed symptoms when they were checked by American personnel before disembarking the cruise ship. While headed to Tokyo’s Haneda airport, officials were informed a test for the coronavirus done by Japanese authorities two or three days earlier had come back positive.

Centers for Disease Control and Prevention spokesman Scott Pauley said in a statement that the group of passengers who arrived at Lackland Air Force Base will remain quarantined there for 14 days and will have no contact with Department of Defense personnel as the CDC is responsible for all parts of the quarantine operation.

Any of the quarantined passengers who shows symptoms of the virus will be taken to a hospital off the base “for containment and specialized care,” according to the statement.

In Asia, with fears of the virus spreading further, Chinese and residents of nearby countries and territories have begun hoarding supplies of everything from masks and other personal protective gear to instant noodles, cooking oil and toilet paper.

New cases in other countries, meanwhile, raised concerns about containment of the virus. Though only a few hundred cases have been confirmed outside mainland China, some recent cases lacked obvious connections to China.

Taiwan on Sunday reported its first death from COVID-19, the fifth fatality outside of mainland China. Taiwan’s Central News Agency, citing health minister Chen Shih-chung, said the man who died was in his 60s and had not traveled overseas recently and had no known contact with virus patients.

Japanese Prime Minister Shinzo Abe convened an experts meeting to discuss containment measures in his country, where more than a dozen cases have emerged in the past few days without any obvious link to China.

“The situation surrounding this virus is changing by the minute,” Abe said.

Japanese Health Minister Katsunobu Kato said the country was “entering into a phase that is different from before,” requiring new steps to stop the spread of the virus.

Japan has 518 confirmed cases, including the 454 from the cruise ship, and one death from the virus.