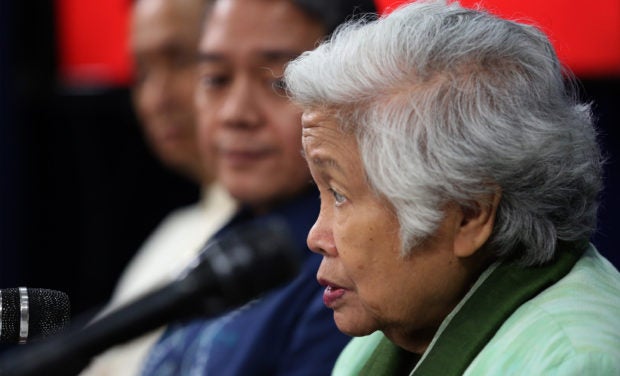 READING COMPREHENSION Education Secretary Leonor Briones says her department’s annual assessment of students is meant to test the level of their reading comprehension and understanding of reading materials appropriate to their grade. “Not knowing howto read is different from being illiterate,” she said at a press briefing in Malacañang on Monday. —JOAN BONDOC

The problem in Bicol is not about literacy but about reading comprehension, Education Secretary Leonor Briones said on Monday, as she sought to correct and clarify an Inquirer report saying that some 70,000 students in the region could not read in both English and Filipino.

Briones said this did not mean that the Bicol learners were illiterate or were “no read, no write.”

“Not knowing how to read is different from being illite¬rate,” she said at a press briefing in Malacañang.

Of the “nonreaders” in Bicol, 18,143 are pupils in Grades 3 to 6, according to data released last week by Grace Rabelas, education supervisor for curriculum and learning management director of the Department of Education (DepEd) Bicol. The rest are in Grades 1 to 2.

The data were based on results of pretests administered in July and August last year by the Philippine Informal Reading Inventory (Phil-IRI), an initiative of the department’s Bureau of Elementary Education.

Albay Rep. Joey Salceda expressed alarm at the report that tens of thousands of elementary students in his region could not read, calling the situation a “ticking time bomb” that would have wider implications on the economy if left unchecked.

“For all our talk of the ‘demographic dividend,’ if young Filipinos are not properly skilled and properly educated, if they cannot apply what’s in their books in practical everyday life, then we shall have failed as a country,” he said in a statement.

“We will not be able to compete in the next generation,” said Salceda, the chair of the House ways and means committee.

Briones said the use of the words “do not know how to read” did not mean no read, no write. “There are those who can read but could not comprehend. There are different levels,” she explained.

She said the statement that the 70,000 students who supposedly could not read in Bicol was “exaggerated” because they included those having difficulty with English and with Filipino.

There are students who can read but not understand certain words, she said.

Briones noted that the number of nonreaders was less than 5 percent of the student population.

“As I said earlier, it was a bit of an insult to Bicolanos to say that there are 70,000 illiterates walking around in Bicol. I don’t think that’s totally accurate because we’re looking at different levels,” she said.

DepEd’s annual assessment of students is meant to test the level of comprehension of what they read and to find out whether their level of understanding of reading materials is appropriate to their grade, according to Briones.

She said the DepEd assessment was conducted not just in Bicol, but in the entire country. The collected data are still being analyzed, she said.

Nepomuceno Malaluan, education undersecretary and chief of staff, said it would be “difficult” to release the results of the pretests administered by Phil-IRI, as the study did not use any standardized tools to measure students’ reading abili¬ties.

DepEd officials clarified, however, that they were not withholding information from the public in their refusal to release nationwide results.

“This is a teacher-administered test, unlike the standardized National Achievement Test that students are required to take … The pretests in schools are all different that’s why while we do have the data, it would be difficult to put these (results) out,” Malaluan told reporters.

He added that DepEd did not feel confident in releasing the information because the lack of standardized measuring tools meant that the results could not be used for analysis and future policy implementation.

Salceda said the economic cost for every nonliterate learner could be staggering.

Those who cannot finish school because they are not functionally literate will likely earn about 50 percent of what a college degree-holder earns, on average, he said.

“On the aggregate, if the rate of latent illiteracy were the same for all regions, we could be forgoing up to 2 percent of national income every year by the time these students start working. This is staggering,” said Salceda, an economist.

He credited DepEd for “being honest about [the reading problem’s] dimensions.”

Salceda said Filipino students and teachers were among the most overworked in the world. “Too many subjects. Too many activities. Not enough results.”

The lawmaker is pushing for a package of bills, including those that empower teachers by reducing their workload, establish a universal free school meal program, and bolster education infrastructure and financing.

Briones said DepEd’s review of the K-12 curriculum was expected to be completed by March 30. The review was conducted amid concerns that the curriculum was not responsive to the students’ needs.

The concerns were heightened by the release of results of the Program for International Student Assessment (Pisa), which showed that the Philippines scored lowest in reading comprehension, and second to the lowest in math and science, among 79 countries and economies.

Briones said the review was accelerated because of the Pisa results.

One of the findings was that the curriculum was too congested, meaning too many competencies were being taught to the students, she said.

Education Undersecretary Diosdado San Antonio said the number of subjects would not necessarily be trimmed.

What would be reduced would be the competencies within a certain subject, he said. “This would be so that we could focus on critical competencies.”—With a report from DJ Yap