As much as P10 billion had changed hands in a so-called pastillas scheme among immigration personnel facilitating the entry of Chinese nationals to the Philippines to work in online gambling operations, Sen. Risa Hontiveros claims
By: Marlon Ramos - Reporter / @MRamosINQ
Philippine Daily Inquirer / 04:58 AM February 18, 2020 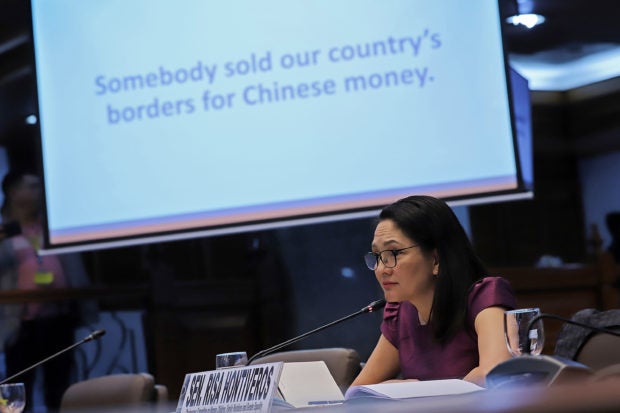 VISA RACKET Sen. Risa Hontiveros, chair of the Senate committee on women, children, family relations and gender equality, vows to further investigate the alleged “pastillas” system in the Bureau of Immigration to “weed out corrupt officials and propose policy changes” during a hearing on human trafficking at the Senate on Monday. —CONTRIBUTED PHOTO

During the resumption of the Senate inquiry on prostitution catering to Chinese workers in the Phililppines, Hontiveros criticized senior BI officials for claiming innocence about unscrupulous immigration personnel and private tour operators who she said facilitated the travel to the Philippines of Chinese citizens.

The hearing was conducted by the committee on women, children, family relations and gender equality that Hontiveros heads.

Hontiveros cited sour¬ces in the bureau claiming that Chinese nationals arriving in the Philippines would pay P10,000 each as “service fee” in exchange for being allowed to work in Philippine offshore gaming operators (Pogos) without the necessary permits from the government.

According to the senator, the racket was called “pastillas” because the bribe money that fixers gave to BI personnel was usually rolled and wrapped, in the manner that the popular milk-based candy is packaged.

“Why are Chinese nationals entering our country being provided with VIP [treatment]?” asked Hontiveros.

“While Filipinos traveling abroad are being burdened by [foreign] immigration, why is our own immigration [bureau] acting like a restaurant that is open to all?”

“They claim that Pogos bring investments here. Instead of investments, why are we seeing an invasion?” she said.

In one footage, an unidentified man, who was covertly taking the video, was seen holding the passports of Chinese citizens who had just arrived at Naia. The man went to a “backroom” office of the BI and handed the passports to waiting immigration personnel, who then processed the travel documents and visa of the Chinese tourists.

An immigration officer was heard repeatedly telling the man to remind the Chinese not to “look” at their mobile phones so as not to attract attention.

Grifton Medina, head of the bureau’s Port Operations Division, said this was the first time he had learned of such a scheme involving immigration personnel, as his office had been carrying out reforms since his appointment in November 2018.

Medina said he was “fami¬liar” with the BI officer who was caught in the video that Hontiveros pointed out, but did not identify him.

Regular reshuffleHe said he had reassigned this officer, who was then posted at the BI Travel Control and Enforcement Unit (TCEU), to another post as part of the bureau’s regular reshuffle.

“I was chosen [by my superiors] to [introduce] changes in the airports. We have taken out some [immigration] officers away from the airports. They were reassigned and some were charged,” Medina said.

“We have installed measures to combat corruption and this kind of activity [is] not only in the arrival [area], but also in the departure gates. I know that it’s a hard task, but I took the challenge,” he also said.

Immigration Deputy Commissioner Tobias Javier also claimed to have no knowledge of the racket at the airport.

“Based on my inquiry with our personnel division, there had been [personnel] changes in the airports. In fact, the TCEU head was replaced last year,” Javier said.

“Don’t fool the public. That is not standard procedure. Don’t tell us that what we saw on these videos are just nothing,” an irked Hontiveros told the BI officials.

“This only means two things: Either you are compli¬cit or you are negligent. And I don’t know which is worse,” she said.

“This [illegal] operation will not be this systematic if no one from inside the BI is protecting it. Pogo operators will not be this bold if nobody is profiting millions of pesos from it,” she said.

The senator described the errant immigration officials as “traitors” who had practically “sold the country’s borders to the Chinese.”

Javier said he would immediately ask Immigration Commissioner Jaime Morente to convene the Board of Commissioners and promptly act on Hontiveros’ exposé.

Hontiveros said the “reforms” in the BI that Medina and Javier claimed had not been successful since the ra¬cket was still going on until last month.

She said the illegal visa processing at the airport only stopped when the government issued a travel ban on China, Hong Kong and Macau to prevent the new coronavirus outbreak in China from spreading here.

Payoff schemeThe scheme had become “more professionalized,” Hontiveros said, since the cash collected from the Chinese were now being placed in indivi¬dual brown envelopes, which would then be distributed to certain BI officials as part of the payoff.

Of the P10,000 that a Chinese paid for visa processing, Hontiveros said P2,000 went to six different BI personnel, with the biggest cut (P650) gi¬ven to the immigration officer.

“So where did the P8,000 go? According to our informant, it’s being distributed before the Chinese tourists arrive in our country. The money is divided among the private travel agencies, the syndicates and their local contacts,” Hontiveros said.

She said immigration fi¬gures showed that some 1.8 million Chinese had visited the country since Pogos started to proliferate under President Duterte’s administration.

“Commissioner Morente has ordered a full-blown investigation to identify those who are possibly part of this syndicate,” she said.

She said Morente was “deeply alarmed” by the allegations at the hearing.

Administrative and cri¬minal cases will be filed against those found to be involved in the racket, Sandoval said, adding that the bureau will coordinate with the office of Hontiveros.—With a report from Tina G. Santos

Read Next
Pupils’ problem not literacy but reading comprehension – DepEd
EDITORS' PICK
Heads may roll at BOC, says Palace if sugar smugglers are allowed to use recycled import permits
Palace: Biggest supermarkets in PH commit to sell sugar at P70 per kilo
What to watch out for when selecting a video surveillance solution
House energy committee chair Arroyo bats for cheap electricity
vivo brings to the Philippines a powerful smartphone with a slimmer body, the vivo Y02s for only PHP 6,499
DOH reports increase in daily COVID-19 deaths, mostly unvaxxed
MOST READ
Metro Manila’s No. 1 wanted man arrested, says NCRPO
Alyssa Valdez to miss Creamline’s AVC Cup campaign
Brian Poe-Llamanzares receives his PhD in Public Administration
Jordan Clarkson arrives in Manila to bolster Gilas Pilipinas
Don't miss out on the latest news and information.