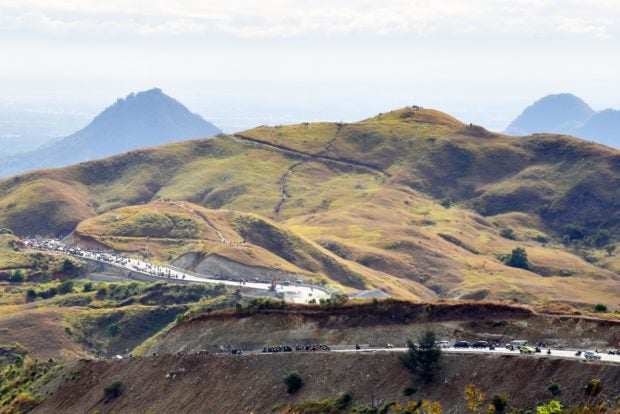 SCENIC ROUTE Daang Kalikasan in Mangatarem town, Pangasinan province, provides travelers a panoramic view of the Lingayen Gulf. The newly built mountain highway, an alternative route to nearby Zambales province, is one of the emerging tourist attractions in northern Luzon. —WILLIE LOMIBAO

LINGAYEN, Pangasinan, Philippines — Two scenic highways linking the provinces of Pangasinan and Zambales were closed to moto¬rists on Monday following road accidents and accumulation of garbage that tourists left there.

Daang Kalikasan and Daang Katutubo, which both pass through rolling hills and mountains, have been attracting tourists since August last year because of the vast scenery seen from the winding roads.

The roads are touted to be the next tourist attractions in Northern Luzon because tra¬velers taking these routes are treated to a panoramic view of the Lingayen Gulf and the plains that traverse western Pangasinan and nearby areas.

Pangasinan Rep. Jumel Anthony Espino recommended the temporary closure of Daang Kalikasan after consulting with the Department of Public Works and Highways (DPWH), local police and the Mangatarem town government.

Espino cited the recent road accidents for the closure of the unfinished highways, saying motorists’ safety was their primary concern.

He also said the trash piling up along the highways had also “caused trouble” to the local government.

“The temporary closure of [Daang Kalikasan] is to improve it and complete the roadwork. We will also study how to keep it safe for everyone,” Espino said in a statement posted on his Facebook page.

The DPWH said the construction of the 54-kilometer Daang Kalikasan, which crossed Mangatarem and is connected to Sta. Cruz town in Zambales, started in 2017 on the side of Zambales.

About 5 km of the P1.13-billion, four-lane mountain highway in Pangasinan are sill under construction and are expected to be completed in 2021.

The road was named in honor of the indigenous peoples from the upland provinces who relocated at Sitio Mapita in Aguilar in the 1960s.

The agencies involved in the project decided to close the roads as they were not ready for the huge number of people visiting the areas, especially on weekends, Bataoil said during a multiagency emergency mee¬ting here on Monday.

“The roads [have yet to be finished] and thousands of people impede the construction as heavy equipment and trucks that bring materials could hardly pass through the vehicles parked right on the road,” Bataoil said.

Maj. Aurelio Manantan, Mangatarem police chief, said they had recorded 12 accidents along Daang Kalikasan since August 2019, seven of which were fatal.

The latest victim was 16-year-old John Marbert Capito, a Grade 11 student from Lasip Grande in Dagupan City. He was biking along the highway when his bike’s brakes malfunctioned upon reaching a sharp curve downhill, causing him to fall into a ravine.

The boy died while being ta¬ken to a hospital in Mangatarem.

Manantan said a forest fire occurred on Feb. 11 when a tourist threw his cigarette on dry grasses. He said the police planned to put up checkpoints and undertake regular patrol to keep tourists off the highways.

Aguilar Mayor Roldan Sagles said there had been no accident or untoward incident along Daang Katutubo but the local government was prepa¬ring for scenarios like those occurring at Daang Kalikasan.