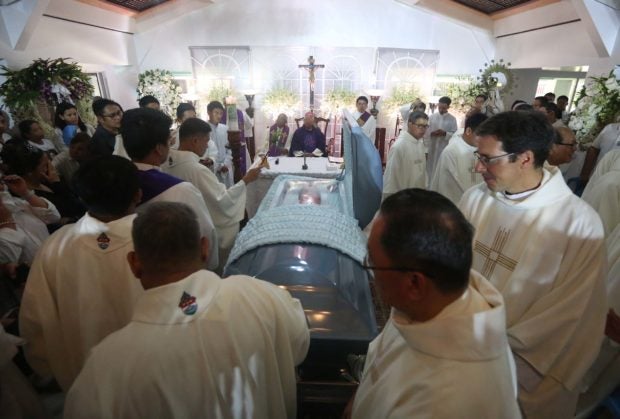 TAAL, Batangas, Philippines — Controversial “healing priest” Fernando Suarez was welcomed home by his family and townmates, who had nothing but kind words for the man, who, for years, stood at odds with high-ranking officials of the Catholic Church.

Suarez, who was embroiled in Church controversies concerning his supposed lavish lifestyle and even sexual misconduct, never brought shame to many people who rather saw him as a “martyr.”

In January, the Vatican cleared Suarez of the accusations, but he died not long after — on Feb. 4 — three days before his 53rd birthday.

“Those issues are nothing to people, like us, who truly knew him,” said Leila Garcia, who went to the same grade school with Suarez in the rural village of Bugtong in this town.

Suarez, the eldest in a brood of four, spent most his years in Canada and elsewhere in the Philippines until the controversies barred him from performing his priestly duties in at least four dioceses.

“I never got to bring myself into calling him ‘father.’ Just Idó. Just recently when I saw him, he invited us to his birthday because he said a lot of people would come. And here we are now,” Garcia said.

Mostly dressed in white, some with a portrait of Suarez printed on their shirts, about 500 people paid the priest their final respects on Saturday, in a beach resort owned by the Mary Mother of the Poor (MMP) Foundation that Suarez founded in 2008 with Canadian priest Jeffrey Mark Shannon.

Among those who attended the funeral was Rodel Vicente, who sounded offended at the mention of the allegations against his longtime friend.

“Never! He would never do such a thing. He was so kind,” Vicente said.

People attested to being cured of their illnesses, while others remembered Suarez for his generosity, feeding the poor, the most recent were those in evacuation centers after the Taal Volcano erupted last month.

To his nephews, Suarez was more than an uncle but a father who healed and guided them, said Jonas Canlubo, who spoke on behalf of the family.

Palang was Suarez’s bishop protector, who defended him in 2014 against charges of sexual harassment that supposedly took place in San Jose, where Suarez put up a church in the poor, remote island village of Ilin. On Ilin, Suarez gave solar lamps and helped establish potable water sources for the community.

“Our two [Filipino] saints, San Lorenzo Ruiz and Pedro Calungsod, were martyrs. In [his own] little way, Fr. Fernando could be a martyr, too,” Manlapaz said in his homily.

Manlapaz said Suarez endured for six long years what Shannon described as something “beyond human understanding.”

“He suffered more than anyone could suffer,” said Shannon, who is taking over the foundation. Among MMP’s donors were business tycoons and wealthy personalities, which the priest, in his past interviews, thought could have made other clergymen envious.

“You must have heard his interview after he was acquitted (by the Vatican). [Suarez said] ‘I fear no more. They had killed me, my name, my being a priest,’” Manlapaz recalled.