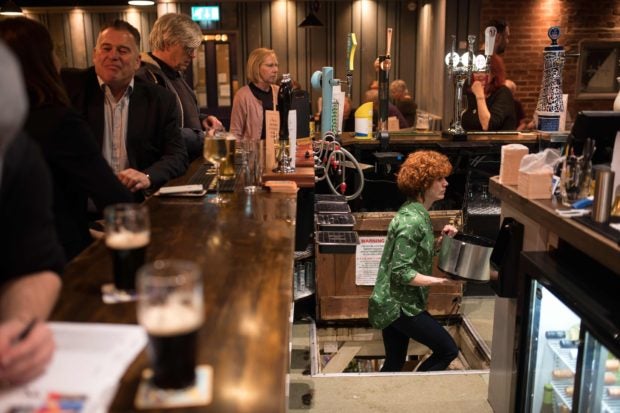 BAR DRINKERS UNITE Landlady Abigail Bennett works behind the bar in the community-owned Ye Olde Cross pub in Ryton village near Newcastle upon Tyne, in northeast England. Pub regulars have banded together to save their favorite drinking hole from bankruptcy. —AFP

RYTON, United Kingdom — In the heart of picturesque old Ryton village in northeast England, pub regulars banded together to save their favorite watering hole, in a cutthroat sector where competition is fierce.

Ye Olde Cross has a history dating back to the 1800s, when Ryton grew into a small town as the wealthy escaped the grime of industry and urban sprawl of Newcastle and Gateshead, 10 kilometers away to the east down the River Tyne.

The pub, which takes its name from the monument erected on the nearby village green where the founder of Methodism, John Wesley, once preached, quickly became a fixture of local life.

But it was forced to call time two years ago due to competition from supermarkets and online retail giants. That caused “heartbreak” for the 7,500 locals, said one regular.

Hundreds of punters then dug deep and took it into community ownership.

“We raised enough money to buy the building but not much more than that,” said Ted Euers, who is one of 12 directors on the pub’s management committee.

“So we decided that we would try and do as much of the work ourselves as we could,” he told Agence France-Presse (AFP).

Now a handful of the most dedicated customers are helping build a new upstairs bar and create space to install a lift.

Ye Olde Cross is one of a select group of about 100 pubs that are now owned by individual investors, after laws passed in 2010 that sought to protect iconic British pubs and help stop their disappearance with community-led takeovers.

Like French cafes, pubs have been a feature of British life for centuries.

But over the last 13 years, about 12,000 have closed across Britain—about a quarter of the nation’s drinking establishments, according to the Office for National Statistics (ONS).

“Last year, we were seeing a pub closing every 12 hours,” said Nik Antona, chair of pressure group Campaign for Real Ale (Camra), which seeks to promote real ale and safeguard pubs as part of Britain’s cultural and social heritage.

The collapse in pub numbers has been attributed to changes in social habits, from falling alcohol consumption, increased social opportunities for the young, high taxation on commercial property and the continued hangover from the bitter 2008 global recession.

But there are signs of recovery: the ONS said in January the number of small pubs and bars — those with fewer than 10 employees — increased last year for the first time in 15 years.

The sector also showed the highest levels of turnover since the end of the financial crisis, it added.

The example of Ye Olde Cross shows what can be done, with people power and lateral thinking, making pubs not just a place to eat and drink, but also as a focus of the community.

The pub has also been boosted by a total of £100,000 in a mixture of grants and bank loans.

While the value of the shares will not fluctuate or increase in value, it does offer local investors a symbolic stake in the future of their community hub.

Volunteer Richard holds aloft a pint of lager after tidying the pub floor, which doubles up as a yoga venue.

As well as yoga, the pub has also become a venue for local knitting groups, film shows and other activities, all aimed at raising cash donations to keep the place running.

Abigail Bennett, who runs the pub with her partner Billy, said their job was not without its demands.

Most pubs in Britain are managed by pub companies or individual breweries, with premises leased out to landlords.

Bennett said running a community-owned pub was “much more stressful than the standard model, but much more rewarding as well. Emotionally rewarding.” Last month, the UK government announced a modest tax cut of £1,000 for the smallest pubs from April this year, amid wider long-standing gripes about hefty overheads.

The cut applies to so-called business rates which are levied on commercial property. Small firms have complained they are prohibitive.

Camra’s Antona said it was small beer and the government needed to do more to help.

“It’s a good start but it’s a sticking plaster,” he said.