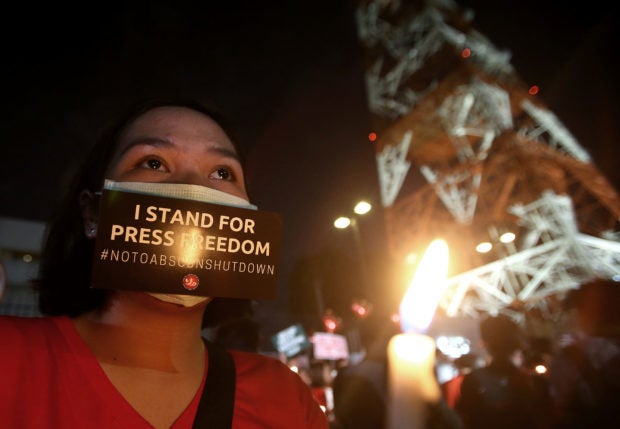 ABS-CBN PROTEST Employees of ABS-CBN and their supporters call for the renewal of the media giant’s franchise in a rally outside the ABS-CBN compound in Quezon City. —RICHARD A. REYES

MANILA, Philippines — If an independent branch of government like Congress is scared of defying President Rodrigo Duterte on the matter of ABS-CBN’s franchise, how can the executive-controlled National Telecommunications Commission (NTC) be so brave?

Some lawmakers are questioning Speaker Alan Peter Cayetano’s logic in stating that the renewal of ABS-CBN’s expiring license is “not that urgent” since the NTC will grant the broadcast giant provisional authority to operate until 2022 anyway.

Buhay Rep. Lito Atienza dismissed the claim that the NTC would permit ABS-CBN to continue broadcasting beyond the expiration of its franchise in March, calling it a “pipe dream.”

“That is a fantasy,” said the congressman and father of ABS-CBN host Kim Atienza.

“The NTC will simply say we cannot possibly give you a provisional authority because the chief lawyer of the republic wants to shut you down,” Atienza said, referring to Solicitor General Jose Calida, who has filed a petition in the Supreme Court to revoke the media network’s license for violating the terms of its franchise and the Constitution.

Albay Rep. Edcel Lagman said the idea of the NTC saving ABS-CBN from shutdown was an “illusory alternative remedy” that was far from a done deal.

ABS-CBN’s 25-year franchise expires on March 30, and Congress goes on a break on March 11.

The House legislative franchises panel, which is supposed to deliberate on at least 10 bills extending ABS-CBN’s license, has not tabled the matter for discussions.

On Friday, Cayetano said the committee chaired by Palawan Rep. Franz Alvarez might begin deliberating on the bills in May or after the State of the Nation Address in July.

He said there was consensus among House leaders that ABS-CBN should be able to operate upon the grant of an NTC provisional authority. He suggested that the House panel submit an official document supporting such.

But Lagman said Cayetano’s excuse for dragging his foot on the ABS-CBN renewal bills was flimsy.

“The renewal of a franchise is the legal, proper and traditional course of action under the sole jurisdiction of the Congress,” the opposition congressman said in a statement on Saturday.

He said ABS-CBN was being given an illusory alternative remedy instead of being granted a justified renewal of its franchise.

Atienza said all 302 members of the House should be given the chance to vote on whether to extend ABS-CBN’s franchise.

Sen. Grace Poe urged fellow lawmakers to put in writing their support for ABS-CBN’s continued operations while its application for a fresh 25-year congressional franchise remained in limbo.

Poe, chair of the Senate public services committee, made the call on Sunday after several Congress leaders, including Senate President Vicente Sotto III and Speaker Cayetano, said last week that ABS-CBN may operate beyond the life of its legislative franchise on March 30 since it had already sought for an extension.

She said she was concerned for the media network’s 11,000 employees who would lose their jobs if the government denied its application, which President Duterte had repeatedly vowed to block. —Reports from DJ Yap and Marlon Ramos