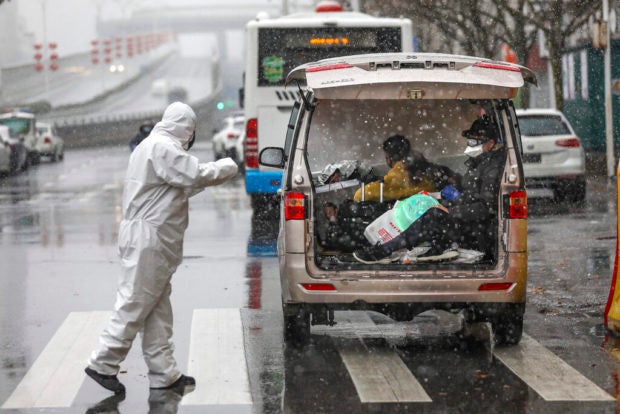 A worker wearing a protective suit transfers patients in the back of a van at a tumor hospital newly designated to treat COVID-19 patients in Wuhan in central China’s Hubei Province, Saturday, Feb. 15, 2020. The virus is thought to have infected more than 67,000 people globally and has killed at least 1,526 people, the vast majority in China, as the Chinese government announced new anti-disease measures while businesses reopen following sweeping controls that have idled much of the economy. (Chinatopix via AP)

BEIJING — The number of new cases from China’s coronavirus epidemic dropped for a third consecutive day on Sunday, as the World Health Organization (WHO) chief warned it was “impossible” to predict how the outbreak would develop.

Global concern remains high about the spread of the virus, which first emerged in China’s central Hubei province last December, with the first death outside Asia reported in France this weekend.

The death toll jumped to 1,665 in mainland China on Sunday after 142 more people died from the virus. More than 68,000 people have now been infected — but the number of new cases of the COVID-19 strain continued to decline.

The number of new cases in other parts of the country has dropped for 12 straight days.

WHO chief Tedros Adhanom Ghebreyesus warned, however, that it was “impossible to predict which direction this epidemic will take.”

“We ask all governments, companies and news organizations to work with us to sound the appropriate level of alarm without fanning the flames of hysteria,” he said, speaking at the Munich Security Conference. “China has bought the world time. We don’t know how much time.”

The UN health body has asked China for more details on how diagnoses are being made.

An international team of WHO experts will arrive in Beijing this weekend for a joint mission with Chinese counterparts.

The scale of the epidemic ballooned on Thursday after authorities in Hubei changed their criteria for counting cases, retroactively adding thousands of new patients to their tally.

Hubei added more than 14,000 cases in a single day after officials there started counting people clinically diagnosed through lung imaging, in addition to those with a positive lab test result.

Chinese authorities have placed some 56 million people in Hubei and its capital Wuhan under quarantine, virtually sealing off the province from the rest of the country in an unprecedented effort to contain the virus.

Local authorities around the country have introduced measures to try and stop the virus spreading.

Beijing’s municipal government has enacted a rule requiring all people coming to the capital to quarantine themselves for 14 days, warning that violators would be punished, according to official media.

Outside mainland China, an 80-year-old Chinese tourist in France was the fourth person to die from the new coronavirus, with the other deaths in the Philippines, Hong Kong and Japan.

The biggest cluster outside China is on a quarantined cruise ship off Japan, with 355 infections now as dozens more cases were confirmed.

The United States, Canada and Hong Kong said they would evacuate their own citizens from the Diamond Princess, and quarantine them on home soil.

Several countries have banned arrivals from China and major airlines have cut services to the country.

Nepal became the latest country to bring its citizens out of Wuhan, with a plane carrying 175 Nepalis arriving in Kathmandu early Sunday.

“So far, we have conducted tests for 1,219 individuals. Of those, 355 people tested positive,” Japanese Health Minister Katsunobu Kato told a roundtable discussion on public broadcaster NHK.

The latest figure represents a rise of 70 from the last government toll.

Japan’s efforts to control the viral infections on the vessel have prompted international concern.

The Diamond Princess arrived off Yokohoma in early February with more than 3,700 passengers and crew from more than 50 countries and regions. It was placed under quarantine after authorities found that a passenger who got off the ship in Hong Kong during its voyage tested positive for the virus.

Officials kept finding new infections among the passengers and crew members and transporting them to Japanese hospitals, while others have been told to stay inside their cabins during the 14-day quarantine period, which should end on Wednesday.

‘Use of police force’

The virus spread last month as millions traveled across the country for the Lunar New Year holiday, which was extended to try and prevent more infections.

People have slowly started to return to work in the past two weeks, though many are doing their jobs from home and schools remain closed.

With the government facing criticism over its handling of the crisis, Chinese President Xi Jinping called for tighter policing to protect social stability.

The government must “increase use of police force and strengthen the visible use of police” during the crisis, Xi said in a Feb. 3 speech published by state media on Saturday.

A number of local officials have been sacked for their role in mishandling the outbreak — including the province’s top two health officials, and the political chiefs of Hubei and Wuhan who were replaced with Xi loyalists.

On Sunday, a host of new reprimands were made against officials in the virus-hit province, including the deputy governor of Qichun county who “cut corners and worked around the centralized quarantine order,” according to Hubei authorities.

Five other party officials from across Hubei were given warnings for offenses such as not preventing mass gatherings in their areas.

China’s central bank said it would also disinfect banknotes with ultraviolet light or high temperatures and store them for up to 14 days before they are put back into circulation.