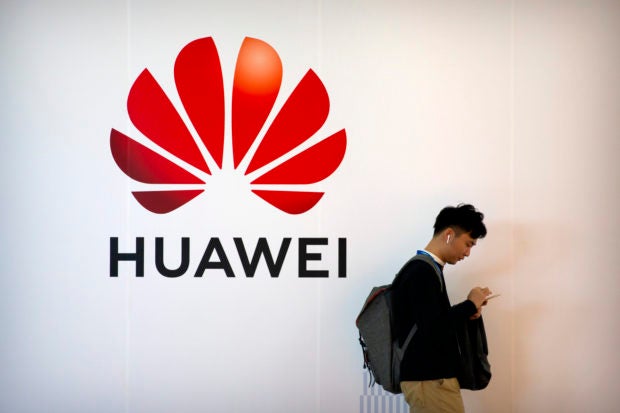 FILE – In this Oct. 31, 2019, file photo, a man uses his smartphone as he stands near a billboard for Chinese technology firm Huawei at the PT Expo in Beijing. The Justice Department has added new criminal charges against Chinese tech giant Huawei and two of its United States subsidiaries, accusing the company in a plot to steal trade secrets. The indictment from federal prosecutors was announced Thursday by federal prosecutors in Brooklyn. (AP Photo/Mark Schiefelbein, File)

The company is also accused of installing surveillance equipment that enabled Iran to monitor and detain protesters during 2009 anti-government demonstrations in Tehran, and of lying to competitors and to the U.S. government about business it was doing in North Korea despite economic sanctions there.

The case comes as the Trump administration is raising national security concerns about Huawei, the world’s largest telecommunications equipment manufacturer, and is aggressively lobbying Western allies against including the company in wireless, high-speed networks.

The new allegations add to the company’s legal woes in the U.S.

The superseding indictment brought by federal prosecutors in Brooklyn adds charges of racketeering conspiracy and conspiracy to steal trade secrets to an existing criminal case in that district, where the company was already charged with lying to banks about deals that violated economic sanctions against Iran.

Federal prosecutors in Seattle have brought a separate trade secrets theft case against the company.

The latest allegations accuse Huawei of plotting to steal the trade secrets and intellectual property of rival companies in the U.S.

In some cases, prosecutors said, Huawei recruited the former employees of rival companies and also directed and provided incentives to its own employees to steal from competitors by offering bonuses to those who brought in the most valuable stolen information.

The stolen information including antenna and robot testing technology as well as user manuals for internet routers.

In May 2013, according to the indictment, a Huawei employee removed a robot arm from the lab of another company, and measurements and photographs of the arm were then shared with company engineers.

In another episode, a professor at a Chinese university entered into a contract with Huawei to develop prototype software for memory hardware, then signed a licensing agreement with a rival company that offered the professor access to its own proprietary technology.

A lawyer for Huawei and a spokesperson for the company did not immediately return messages seeking comment.

Trump administration officials, including Cabinet secretaries, have recently leveled national security allegations against Huawei in an effort to encourage European nations to ban the gear from next-generation cellular networks.

Secretary of State Mike Pompeo and Defense Secretary Mark Esper made the pitch to Western allies during a trip to Munich this week. Attorney General William Barr, in a speech last week, lamented what he said was China’s aspiration for economic dominance and proposed that the U.S. invest in Western competitors of Huawei.

The administration’s national security adviser, Robert O’Brien, asserted this week that Huawei can secretly tap into communications through the networking equipment it sells globally.

The company disputes that, saying it “has never and will never covertly access telecom networks, nor do we have the capability to do so.”