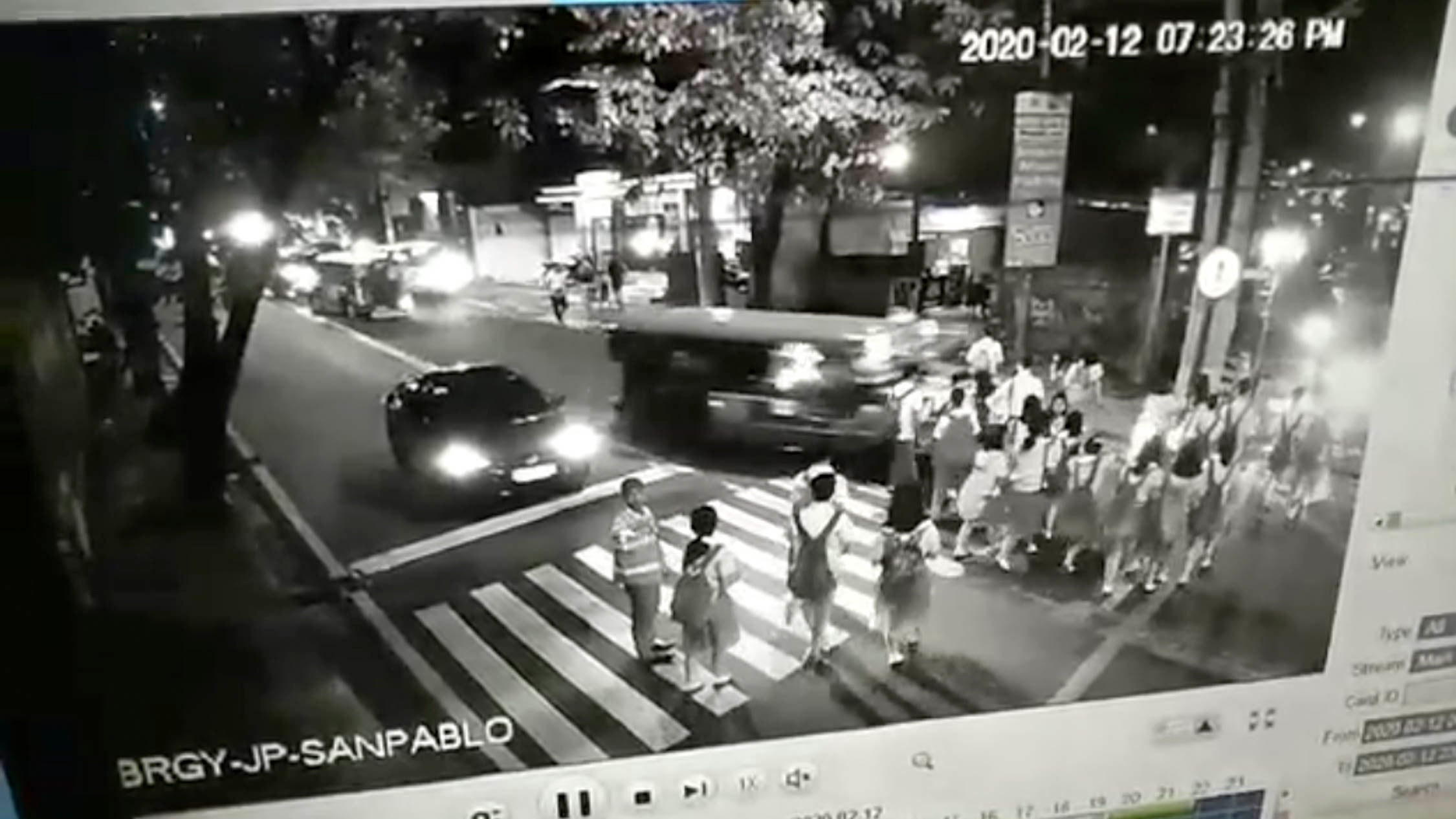 FATAL CROSSING A photograb from the footage taken by a CCTV camera shows a passenger jeepney moments before it hits eight students of Gen. Pio del Pilar National High School at the corner of J.P. Rizal Avenue and Mabini Street in Barangay Poblacion, Makati City, on Wednesday night. —CCTV courtesy of Makati Police

A 13-year-old student was killed while 19 others were injured, some critically, after they were struck by vehicles in road accidents that happened in Makati and Parañaque cities on Wednesday night.

Jules Villapando, a Grade 8 student of Gen. Pio del Pilar National High School, died after he and seven other schoolmates were hit by a speeding jeepney while crossing a pedestrian lane at the corner of J.P. Rizal Avenue and Mabini Street in Barangay Poblacion, Makati City.

Based on footage taken by a closed-circuit TV camera, the police said the accident happened at 7:23 p.m. as Villapando and the other victims were crossing the street after being given the go-signal by a traffic enforcer. A passenger jeepney with plate number PYV848 suddenly overtook a car that had stopped at the intersection, before running against the flow of traffic and then hitting the students.

The victims who were in Grades 8 and 9 were brought to Makati Medical Center and Ospital ng Makati for treatment.

While Villapando was declared dead, the seven other students between 13 and 17 years old suffered abrasions, bruises and fractured bones.

Police arrested the jeepney driver, Crisalde Tamparong, who claimed the jeepney had lost its brakes, but Makati police chief Police Col. Rogelio Simon was doubtful of his alibi. Based on the CCTV footage, Simon said the jeepney stopped right in front of Poblacion’s covered court after hitting the students. “[If it had no brakes, it] would have crashed [against] the wall of the park beside Pasig River,” he added.

Tamparong could present only a violation ticket when the police asked for his driver’s license. He said he had yet to get back his license due to an unpaid fine for a traffic violation he committed, also in Makati, in September.

The 31-year-old suspect was detained at the Makati police traffic investigation unit. He faces charges of reckless imprudence resulting in homicide and multiple physical injuries.

In a statement on Thursday, Makati Mayor Abby Binay condoled with Villapando’s family and prayed for the other students’ recovery from the “traumatic experience.”

“I assure the victims and their families that the city government will see to it that justice will be served,” she said as she ordered the police to test Tamparong for drugs. She added that she would also recommend the immediate suspension of the jeepney’s franchise.

In Parañaque City, 12 persons were injured after a sport utility vehicle rammed them outside the Baclaran Church, right after the last novena and Mass for the day. They were rushed to San Juan de Dios Hospital in Pasay City with three of them said to be in critical condition.

A police report said a black Toyota Fortuner with license plate RPM55 driven by Allan Respecia of Tondo, Manila, was running on Redemptorist Road in Baclaran when it went up the sidewalk at 9:40 p.m.

Aside from bystanders, it hit four parked motorcycles, an electric bike and three vendor carts.

Respecia said his vehicle “suddenly accelerated” but the police said they were investigating if there was human error involved.

The suspect was detained at Parañaque police station on charges of multiple physical injury and damage to property.