Hitting two birds on V-Day: Pinoys love ridding of their ex’s stuff — and cash in on it | Inquirer News
Close
menu
search

Hitting two birds on V-Day: Pinoys love ridding of their ex’s stuff — and cash in on it

MANILA, Philippines – Are you still reeling from that horrendous relationship with you ex-girlfriend or ex-boyfriend?  Do you hate that feeling of having no special someone to spend Valentine’s Day with?

Well, one way you can move on from the past is by getting rid of things from your former partner — and earning some money from it.

According to a survey conducted by online marketplace Carousell, Filipinos love selling stuff given by their exes: 450 out of 500 respondents, or at least 9 out of 10 Filipinos are willing to send these pre-loved items — literally and figuratively — to new owners in exchange for cash.

This is a huge increase compared to the 30 percent recorded in a similar survey in 2017. 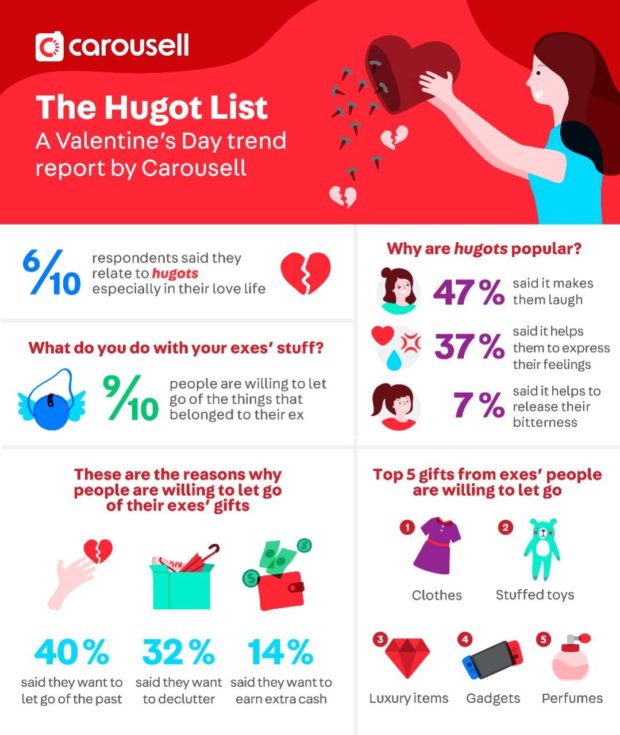 Data obtained from the respondents also showed that the most compelling reason to sell the gifts is still a yearning to forget memories, with 40 percent saying that they want to let go of the past.

Other reasons appear more practical: 32 percent noted that they want to declutter and clean up their residences, and another 14 percent said they want to earn more cash.

The study also found out that most of the gifts being sold online are clothes, followed by stuffed toys, luxury items, gadgets, and perfume.

“Selling these items on Carousell not only freeing themselves from their exes’ baggage but they are also making money out of it,” the company who conducted the survey said on Thursday.

“Whether these items remind you of your past-relationship, past-job or even past-self, Carousell is the quick solution for you to let go of these items,” they added.

Aside from the items being sold, the company also asked respondents about another timely topic: why are cheesy “hugot” lines so much of a big deal?

It appears that 60 percent can relate to the lines with their love lives, while 47 percent said that it makes them laugh despite the pain that they are experiencing.  Another 37 percent claimed that it helps them express their feelings while seven percent noted that it aids in releasing bitter emotions.

However, the moral of this survey is that if objects and gifts can serve a new purpose for new owners, then much more for people who have experienced heartbreaks in the past.

“New possibilities can be made with that item that was once a reminder of heartbreak, could mean a new opportunity for someone else on Carousell,” the company said.

Read Next
Can House franchise panel be discharged from tackling ABS-CBN issue?
EDITORS' PICK
Metro Manila posts lowest temperature yet this ‘amihan’ season at 19°C
DOH: 28,471 new COVID-19 cases in PH; active cases now 284,458
Gear up and get ready to play with Yamaha Mio Gear
Acer starts the year off strong with the Aspire Vero National Geographic Edition
On Day 2 of implementation, gov’t says workers now exempt from ‘no vax, no ride’ policy
Over 3 Million worth of prizes to be won at Smart Padala’s SENDali Manalo Promo!
MOST READ
Cold-case investigation names surprise suspect in Anne Frank’s betrayal
Emma Stone calls Andrew Garfield a ‘jerk’ after he ‘lied’ about his ‘Spider-Man: No Way Home’ appearance
Derek Ramsay on being married to Ellen Adarna: ‘Gumaan ‘yung mundo ko’
Czech anti-vax singer dies after deliberate infection
Don't miss out on the latest news and information.