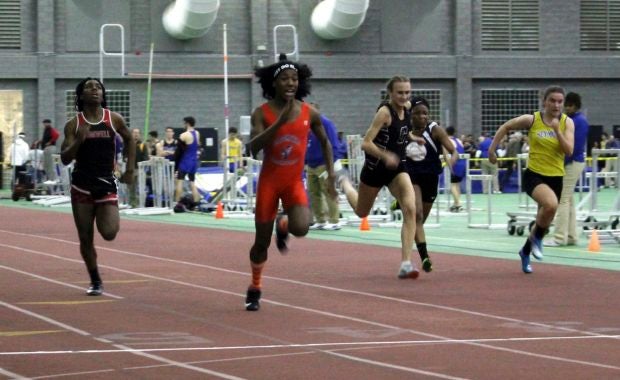 FILE – In this Feb. 7, 2019, file photo, Bloomfield High School transgender athlete Terry Miller, second from left, wins the final of the 55-meter dash over transgender athlete Andraya Yearwood, far left, and other runners in the Connecticut girls Class S indoor track meet at Hillhouse High School in New Haven, Conn. Miller and Yearwood are among Connecticut transgender athletes who would be blocked from participating in girls sports under a federal lawsuit filed Wednesday, Feb. 12, 2020, by the families of three athletes. (AP Photo/Pat Eaton-Robb, File)

They argue that allowing athletes with male anatomy to compete has deprived them of track titles and scholarship opportunities.
“Mentally and physically, we know the outcome before the race even starts,” said Smith, who is the daughter of former Major League pitcher Lee Smith. “That biological unfairness doesn’t go away because of what someone believes about gender identity.

All girls deserve the chance to compete on a level playing field.”

The lawsuit was filed against the Connecticut Association of Schools-Connecticut Interscholastic Athletic Conference and the boards of education in Bloomfield, Cromwell, Glastonbury, Canton and Danbury.

“Forcing girls to be spectators in their own sports is completely at odds with Title IX, a federal law designed to create equal opportunities for women in education and athletics,” attorney Christiana Holcomb said. “Connecticut’s policy violates that law and reverses nearly 50 years of advances for women.”

The Connecticut Association of Schools-Connecticut Interscholastic Athletic Conference says its policy follows a state anti-discrimination law that says students must be treated in school by the gender with which they identify and the group believes the policy is “appropriate under both state and federal law.”

The lawsuit follows a Title IX complaint filed last June by the girls’ families and the Alliance Defending Freedom with the U.S. Education Department’s Office for Civil Rights, which is investigating the policy.

The lawsuit centers on two transgender sprinters, Terry Miller and Andraya Yearwood, who have frequently outperformed their cisgender competitors.

The two seniors have combined to win 15 girls state indoor or outdoor championship races since 2017, according to the lawsuit.
The three plaintiffs have competed directly against them, almost always losing to Miller and usually behind Yearwood. Mitchell finished third in the 2019 state championship in the girls 55-meter indoor track competition behind Miller and Yearwood.

“Our dream is not to come in second or third place, but to win fair and square,” Mitchell said. “All we’re asking for is a fair chance.”

“I have faced discrimination in every aspect of my life and I no longer want to remain silent,” Miller said. “I am a girl and I am a runner. I participate in athletics just like my peers to excel, find community, and meaning in my life. It is both unfair and painful that my victories have to be attacked and my hard work ignored.”

Yearwood said she also is a girl and has been hurt by the efforts to “tear down my successes.”

The attorneys Alliance Defending Freedom is asking the court to prevent the transgender girls from competing while the lawsuit moves forward. No hearing date on that request had been scheduled Wednesday, the day before the state’s indoor track championships begin.

Connecticut is one of 17 states that allowed transgender high school athletes to compete without restrictions in 2019, according to Transathlete.com, which tracks state policies in high school sports across the country.

Eight states had restrictions that make it difficult for transgender athletes to compete while in school, such requiring athletes to compete under the gender on their birth certificate, or allowing them to participate only after going through sex reassignment procedures or hormone therapies, according to Transathlete.

Yearwood and Miller have said they are still in the process of transitioning but have declined to provide details.