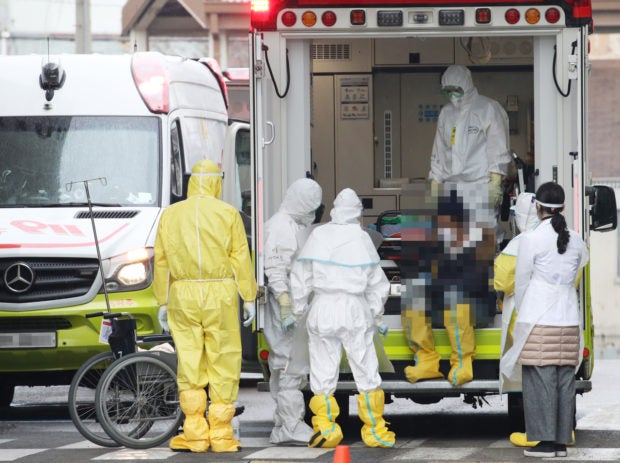 An individual who returned from Wuhan Wednesday who showed possible symptoms arrives at the National Medical Center on Wednesday. Yonhap via The Korea Herald/Asia News Network

The third batch of evacuees from Wuhan, China’s Hubei province — 147 Koreans and Chinese nationals who are family members of Korean nationals — arrived here via a flight chartered by the Korean government. Seven of them were sent to a hospital, while the rest were transported to a designated quarantine center outside Seoul.

According to the government’s response team, the third, eighth and 17th patients have been cleared of the virus and released from isolation.

Patients are considered free of the virus if the coronavirus’s genetic materials are not detected in two consecutive PCR tests conducted every 24 hours. PCR is a method for making large amounts of copies of a genetic sample, so that it can be tested.

One of the three — the third patient — was discharged from a hospital in Goyang, Gyeonggi Province. The discharge of the other patients released from isolation will be determined by medical staff treating the individuals. Before Wednesday, four patients — the first, second, fourth and 11th patients in order of being confirmed — had been released after making a full recovery.

The flight carrying evacuees from Wuhan arrived at Gimpo Airport around 6:20 a.m. Wednesday, and most were transported to the Joint Forces Military University’s Defense Language Institute in Icheon, Gyeonggi Province, where they will be quarantined for 14 days.

Seven individuals were transported to the National Medical Center. Those sent to the hospital are five individuals showing symptoms — one who showed symptoms before boarding the flight and four after arriving in Korea — and two of their children.

Those who returned from Wuhan last month are set to be allowed into the general public on Saturday and Sunday as planned, and the government is not considering further measures.

“Checking on them through one or two phone calls (after release) is being considered, but additional quarantine measures are not considered necessary,” Vice Minister of Health and Welfare Kim Gang-lip said Tuesday.

“The government’s position is the scientific basis for monitoring after 14 days or considering the incubation period to be longer.”

Seoul currently considers the maximum incubation period to be 14 days, despite a case with the possibility of a longer incubation period being confirmed Tuesday, and a study from China that suggests 24-day incubation may be possible. On Tuesday, the 28th patient was confirmed, whose last contact with an infected individual occurred at least 18 days ago.

The government, meanwhile, will expand the special immigration measures to Hong Kong and Macao from midnight Wednesday in light of the recent rise in novel coronavirus patients in the two cities.

The special immigration measures include passengers being required to use separate immigration facilities and to provide and verify contacts and addresses in Korea. The measures had previously been applied only to arrivals from China’s mainland.