MANILA, Philippines — A photo showing the anchors of GMA News wearing the colors of the embattled broadcast network ABS-CBN during their live newscast went viral on social media Tuesday night. 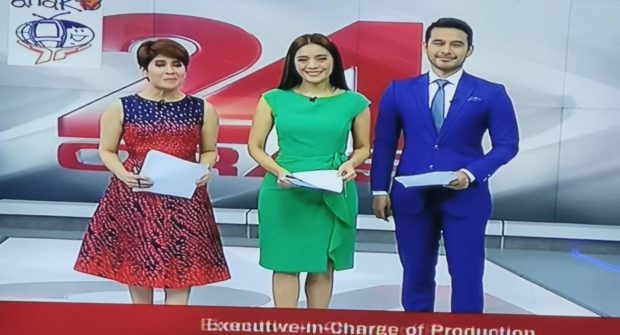 A Facebook post by a certain Robert Terranz garnered about 5,200 likes and 3,000 shares after pointing out that TV anchors Pia Arcangel, Vicky Morales, and Atom Araullo were wearing the colors of the ABS-CBN logo during their broadcast of primetime news program 24 Oras on Tuesday night.

“Did… did the 24 Oras reporters really wear ABS-CBN’s theme colors??? Is this a coincidence??? Is this media solidarity??? My heart is soft,” Terranz wrote in his post.

The circles of the ABS-CBN logo symbolize the three regions of the Philippines: red for Luzon, green for Visayas, and blue for Mindanao.

The fate of the ABS-CBN is in limbo as its franchise is set to expire on March 30, 2020 and yet Congress has not yet tackled bills regarding its renewal for another 25 years.

Moreover, Solicitor General Jose Calida recently filed before the Supreme Court a quo warranto petition calling for the cancellation of the ABS-CBN’s franchise.