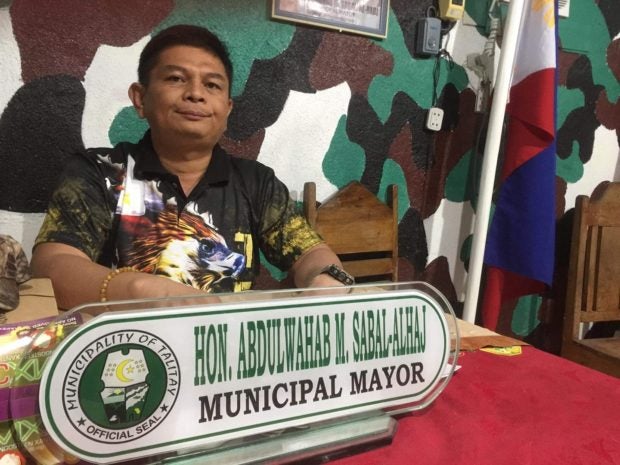 MANILA, Philippines — A mayor in Maguindanao pro¬vince, whose name appeared on President Rodrigo Duterte’s list of politicians allegedly involved in the illegal drug trade, was shot and killed by a group of gunmen outside a hotel in Manila on Monday night.

Police said Sultan Sumagka (formerly Talitay) Mayor Abdulwahab Sabal was outside the Mannra Hotel on Quirino Avenue with his bodyguard, office staff, and wife, Mohanna, when an unknown number of gunmen attacked them at 10 p.m.

Footage from a security came¬ra showed that Sabal and his companions were loading their luggage in a sport utility vehicle parked in front of the hotel when the suspects fired at the mayor.

Sabal and his companions ran toward the hotel, but the mayor was hit and collapsed at the entrance. He died instantly from several bullet wounds.

A bullet hit and shattered the hotel’s glass door. The ma¬yor’s companions, meanwhile, were unhurt.

“He (Sabal) was bloody when investigators found him. We will find out the exact number of wounds after the autopsy,” said Capt. Henry Navarro, Manila Police District homicide section chief.

He said the victim’s family, through their lawyer, authorized the examination.

Sabal was in Manila to attend a conference of local officials on Monday, Navarro said.

The mayor and his compa¬nions checked in at the Mannra on Sunday night and checked out the following morning. They left their bags at the hotel, informing its staff that they would collect their belongings later.

Residents who lived across the hotel said they heard at least four gunshots on Monday night. Security personnel from the hotel said the shots came from a car on the opposite lane of Quirino Avenue heading toward Taft Avenue.

Investigators are looking into illegal drugs and politics as possible motives behind the killing.

Sabal was among the local officials the President named in August 2016 as politicians suspected to be involved in the illegal drug trade.

Sabal was then town vice mayor while his elder brother, Montasir, was serving as mayor. Montasir, who was also included on the narcolist, was elected vice mayor of Sultan Sumagka in 2019.

In September 2016, Sabal, his wife Mohanna, bodyguard Nasser Maulana, and driver Norodin Abas were arrested at Cotabato City airport when a search on their vehicle yielded several firearms, 72 grams of “shabu” (crystal meth) and a 60-mm mortar shell developed into an improvised bomb.

The bomb found in Sabal’s vehicle resembled the explosive that was detonated at the night market on Roxas Avenue in Davao a week earlier, prompting authorities to pre¬sent Sabal’s group for inquest proceedings for their alleged involvement in the attack in Duterte’s hometown.

Fifteen people were killed and 70 others were wounded in the night market bombing.

Sabal’s relatives then said they were aware of efforts to link them to the bomb attack. Sabal’s younger sibling, Morsheed Manepel, said his brother was being tied to a son of slain Malaysian terrorist Zulkifli bin Hir (alias Marwan), who was hired to execute the bomb plot.

Manepel denied that any member of the family knew Marwan’s son.