SINGAPORE — Asia’s biggest air show opened in Singapore Tuesday under the shadow of a deadly coronavirus outbreak that has forced dozens of companies to withdraw and is threatening to hammer the aviation industry.

The biennial Singapore Airshow attracts hundreds of global aerospace firms and airlines to the financial hub, where they negotiate multi-million-dollar deals and watch spectacular aerial displays by fighter jets. 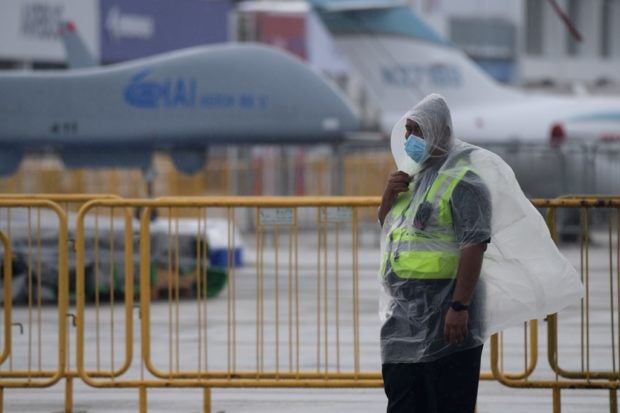 A member of staff wearing a protective face mask and a plastic poncho is pictured on a road next to the tarmac during a media preview day ahead of the Singapore Airshow in Singapore on February 9, 2020. (Photo by ROSLAN RAHMAN / AFP)

But the virus – which has killed more than 1,000 in China and spread to more than two dozen other countries – is overshadowing this year’s event.

Singapore has so far reported 45 cases, and the city-state last week raised its health alert level to the same as during the deadly 2002-2003 SARS outbreak.

The number of exhibitors deciding to skip the show has now climbed to over 70.

Withdrawals include US aerospace giant Lockheed Martin, which makes warplanes and defense equipment used by militaries around the world, Canada’s Bombardier and plane maker De Havilland.

At least 10 Chinese companies have also pulled out after Singapore imposed a ban on people traveling from China in a bid to stem the spread of the virus, while a major aviation conference on the eve of the air show was axed.

Organizers decided to push ahead, however.

They are taking precautions such as limiting the number of public tickets and advising participants to greet one another by waving from a distance or bowing, instead of shaking hands.

Participants arriving for the first day of the show filed past a thermal scanner that checked their temperatures and bottles of hand sanitizer were placed around the vast exhibition center hosting the event.

The center looked emptier than at previous editions of the show, however, and few major deals are expected this year.

Nevertheless, major players, such as Boeing – seeking to recover from a crisis sparked by fatal crashes involving its 737 MAX model – and Airbus, were still in attendance and organizers struck an upbeat note.

“Despite the current situation, attendance is encouraging,” said Vincent Chong, chairman of organizer Experia Events, at an opening ceremony on Monday evening.

“While the travel restrictions have impacted the number of attendees at this year’s Airshow, the current participant count tells us that (it) is still regarded as one of the world’s leading aerospace and defense exhibitions.”

Despite Chinese exhibitors pulling out, China’s air force is still sending an aerobatics team to take part in the aerial displays that are a highlight of the show.

But the mood will likely remain subdued in Singapore this week as airlines reel from the impact of many nations barring Chinese travelers over the coronavirus outbreak.

The International Air Transport Association told AFP it was a “challenging time” and airlines would be “impacted negatively”, but added it was too early to assess the full damage.

The association, however, noted that during the outbreak of Severe Acute Respiratory Syndrome (SARS) – which, like the current virus, spread from China and killed hundreds – Asia-Pacific airlines lost an estimated $6 billion in revenues.

The tourism industry as a whole will suffer “a massive negative blow” due to bans on arrivals from China, said Rajiv Biswas, Asia-Pacific chief economist at IHS Markit.

In the latest sign of the impact from the virus, Singapore’s tourism board warned Tuesday that visitor arrivals to the city-state were expected to fall by about 25 to 30 percent this year.