Panelo on VFA scrapping ‘inconsistency’: ‘Much ado about nothing’ 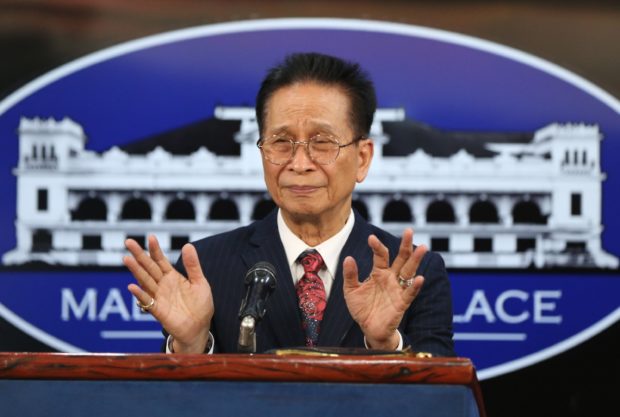 MANILA, Philippines – “It is much ado about nothing.”

Presidential spokesperson Salvador Panelo said this in a statement on Sunday in reference to the supposed contradicting and inconsistent statements made by him, Executive Secretary Salvador Medialdea, and Defense Secretary Delfin Lorenzana regarding the termination of the Visiting Forces Agreement (VFA).

“This representation was merely quoting the President when he said that he would instruct the Executive Secretary to tell the Department of Foreign Affairs to send a notice of termination to the United States on the VFA,” explained Panelo.

“To be clear, this representation did not say that the directive of the President to the Executive Secretary has already been issued or given,” he added.

In addition, Panelo said that Medialdea had not received instructions from the President and that the President might even directly instruct Foreign Affairs Secretary Teodoro Locsin Jr.

Meanwhile, Panelo called news reports on the supposed confusion regarding the VFA termination “amusing,” and stressed that there was “neither contradiction nor inconsistency” among the statements made by him, Medialdea, and Lorenzana.

“What is inaccurate and untrue are news articles saying that there is an internal clash within the President’s Cabinet on the situation,” said Panelo. “There is none.”

“We are always in unison with respect to the policies enunciated by the President,” he added.

On Sunday, Vice President Leni Robredo called out the confusion caused by the statements of the said government officials regarding the termination of the VFA.