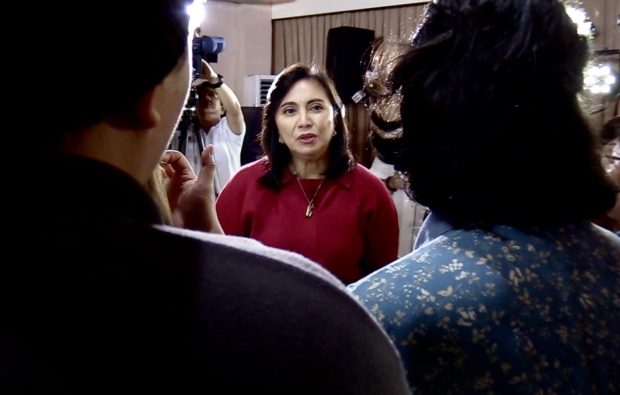 Vice President Leni Robredo talks to members of the media after making public her report on the Duterte administration’s drug war on Monday, Jan. 6, 2020, at the Office of the Vice President in Quezon City. (Photo by NOY MORCOSO / INQUIRER.net)

“We don’t know what’s the truth one government agency says this is true, but another one says the opposite,” Robredo said in Filipino in “BISErbisyong LENI” her weekly show aired over AM radio station RMN-DZXL 558.

“A government agency should not make a public statement that it’s sure to be. But sometimes that’s what happens,” she added.

However, Defense Secretary Delfin Lorenzana denied this on Saturday, saying that the order to notify the US on the termination of the VFA is “fake news.”

On the same day, Medialdea said that he had not received the President’s instruction to terminate the VFA.

Panelo also clarified that Medialdea had informed him about the issue the previous night and that he was quoting the President on his earlier statement.

READ: Medialdea yet to receive Duterte’s instruction to terminate VFA

On Sunday, Panelo said that official documents on the termination of the VFA would be needed and that these might be available by Monday when government offices open and the President returns from Davao City.

“I hope that’s not done because the public is confused about who to believe,” she added.