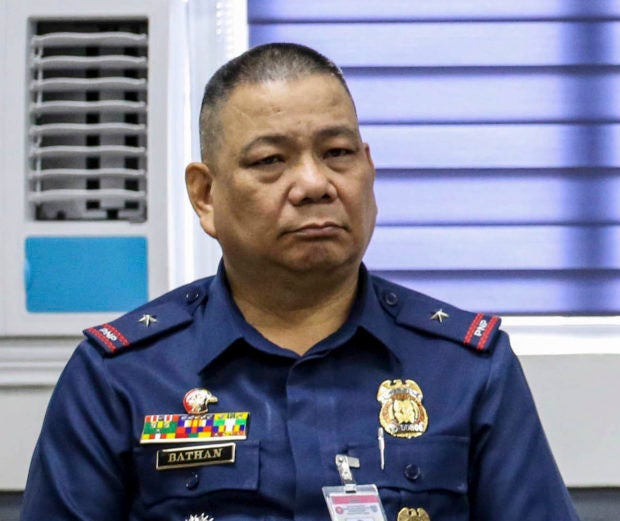 The senior police official who was widely criticized for allegedly disrespecting the rights of a private citizen during the Nazarene procession last month was promoted on Friday to the third-highest position in the Metro Manila police force.

Some observers interpreted Bathan’s reassignment as a promotion since he will be the NCRPO’s No. 3 official, but others said Bathan, who has only a year more before he reaches the mandatory retirement age, will keep his old rank and the SPD directorship actually had more powers.

“That’s actually a promotion,” said Police Brig. Gen. Debold Sinas, the current NCRPO chief, whose chief of staff, Police Col. Danilo Macerin, was originally in line to succeed Ferro.‘He had to move up’

But Sinas, who appeared to be indifferent to Bathan’s “promotion,” quickly clarified that the movement also involved organizational aspects in the entire PNP.

“The reason why Bathan is the one replacing Ferro is because my chief of staff [Macerin] is not yet a general. He cannot assume that office yet,” Sinas said. “Secondly, Bathan is one of the more senior district directors. He had to move up so that the junior officials under him can also move up.”

Bathan served as Davao deputy regional director for administration in August 2018 before being assigned Eastern Police District director in June 2019 then to the SPD in August 2019.

His most controversial stint was in 2016, when his men at the Pasay police were implicated in the questionable detention, supposed torture and killing of father and son Renato and JP Bertes, one of the first dubious cases in the drug war. Bathan again found himself in a controversy during the Black Nazarene procession in Quiapo, Manila, last month when he supposedly ordered the seizure of the mobile phone of television reporter Jun Veneracion of GMA News.

At the time, Veneracion was recording a video of a Nazarene devotee being strangled by a volunteer marshal of the procession while a policeman wrestled him to the pavement. The video was later deleted from his phone.

Asked about the incident, Gamboa appeared unaware of any investigation of the incident involving the reporter but he delegated the matter to Sinas.

“If there is a need to investigate, then we will investigate but we are still leaving everything to the NCRPO,” Gamboa said. “It is within its powers to take the appropriate disciplinary measures and then they will recommend to me what needs to be done.”But Gamboa also said in a statement that Bathan’s promotion, which takes effect on Saturday, was part of several reassignments that were part of his announced “internal cleansing” of the PNP.

Gamboa, who had relieved Bathan on Thursday, announced his promotion in the same statement where he announced the relief of Pasay City police chief Col. Bernard Yang, Muntinlupa chief Col. Gerard Umayao and Caloocan chief Col. Noel Flores and seven precinct commanders in these cities.

Sinas confirmed that Bathan’s relief was part of Gamboa’s directive to reorganize the ranks in Pasay, Muntinlupa and Caloocan Cities, after discovering that police precincts in the aforementioned cities failed to curb illegal gambling in their areas.