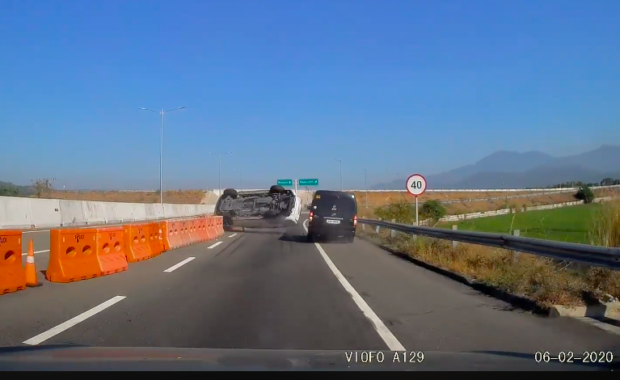 A screenshot of the video coming from the dashboard camera of another motorist.

MANILA, Philippines – A sports utility vehicle (SUV) flipped several times after it was rammed from behind by a wayward van during an accident caught on dashboard camera along the Tarlac-Pangasinan-La Union Expressway (TPLEx) on Thursday morning.

In a video posted on Facebook, a black Toyota Hi-Ace van was seen speeding when it encountered a plastic barrier that merges three lanes of the highway, prompting the driver to slam on the brakes and swerve drastically on the right lane where a white Mitsubishi Montero was traversing in TPLEx’s Pozorrubio, Pangasinan area.

The van hit the left rear bumper of the SUV causing it to roll and flip several times in the air.

We had quite a scare this morning on our family road trip to Vigan.😰😢 We were literally seconds away from this road accident near Pozzorubio Exit of TPLEX. Posting this video caught by our dash cam (audio was removed) hoping it will help in the investigation. Praying for all the passengers, hopefully there were no serious injuries. We saw bloodied faces but we think they were all conscious after everything settled. Drive safe and be very careful on the road please! 🙏🙏🙏#tplex

The Mitsubishi Montero flipped many times but investigators from the Pozorrubio Police Station told INQUIRER.net in a phone interview that all of its passengers survived the horrific crash with various injuries.

At least five persons were brought to a nearby hospital, police said.

Pozorrubio officers also said that both parties agreed to a settlement, with the driver of the van shouldering the medical expenses of the victims and the cost of repair of the vehicle.

(There may be cases filed from this incident but both parties agreed to settle, the other side are not interested to pursue a case.  [The driver of the van] shouldered the hospital expenses and the cost to repair the SUV’s damage.)