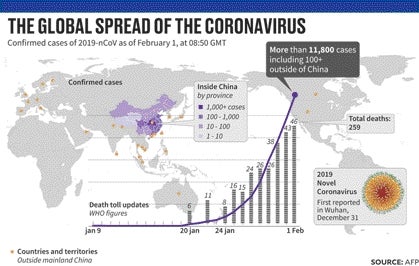 BEIJING — The new coronavirus outbreak has killed more than 300 people and infected more than 14,000 in mainland China and beyond, forcing governments around the world to take drastic measures.

Following the World Health Organization (WHO) declaration on Thursday of a global emergency over the new coronavirus, the United States temporarily banned the entry of foreign nationals who have traveled to China over the past two weeks.

Major restrictions were also placed on US nationals, with mandatory 14-day quarantines for those returning from Hubei, the Chinese province at the center of the outbreak.

The only foreign nationals exempted from the ban are immediate family members of American citizens and permanent residents.

Australia and Israel followed suit with a similar ban on noncitizens who have traveled to China in the last 14 days.

Singapore, Malaysia, the Philippines and Mongolia have announced similar restrictions on people traveling from China.

Some nations have closed their borders with China in a bid to protect their territory from the outbreak.

Kazakhstan has halted cross-border bus and passenger train services to China, and Mongolia has closed its border with China to cars, while North Korea — an isolated nation that relies heavily on its links with China — banned foreign tourists.

Vietnam on the weekend announced a suspension of all mainland China flights.

Papua New Guinea went further than the others: it shut its air and sea ports on Wednesday to all foreign travelers coming from Asia. The impoverished nation also shut its only land border with the Indonesia-controlled province of West Papua.

A number of countries have temporarily stopped issuing visas to Chinese nationals after the coronavirus outbreak.

Singapore has stopped issuing all types of visas to Chinese travelers, while Vietnam — a popular destination for Chinese tourists — has halted tourist visas.

Russia, a close Beijing ally, announced on Saturday it would halt visa-free tourism for Chinese nationals and also stop issuing them work visas.

It had already stopped issuing electronic visas to Chinese nationals that allowed them to cross the border in parts of the Far East and western Russia.

Similar visa restrictions of varying scale have been imposed by the Philippines, Sri Lanka, Malaysia, and the African nation of Mozambique.

Since emerging from the central Chinese city of Wuhan in late December, the coronavirus has killed 304 people in China as of Sunday, with authorities reporting 45 new deaths from the previous day. They reported 2,590 new confirmed cases, bringing the total to nearly 14,500.

The number of confirmed infections in China is far higher than the Severe Acute Respiratory Syndrome (SARS) outbreak of 2002-2003.

SARS, which is caused by a pathogen similar to the new coronavirus and also originated in China, killed 774 people worldwide — most of them in mainland China and Hong Kong.

China has imposed unprecedented measures to halt the spread of the virus, which is believed to be able to jump from human to human via droplets.

Wuhan, the epicenter of the outbreak and capital of Hubei, has been under quarantine since Jan. 23.

Similar measures have been in place across all of Hubei, effectively sealing off more than 50 million people.

Some 800 kilometers away, Wenzhou, a city of 9 million people in eastern Zhejiang province, was virtually shut down on Sunday.

Only one resident per household is allowed to go out every two days to buy necessities, while 46 highway toll stations have been closed. The city had previously closed public places such as cinemas and museums and suspended public transport.

Zhejiang province has the highest number of confirmed cases outside central Hubei, at 661 confirmed infections, with 265 of those in Wenzhou.

The emergence of the virus came at the worst time for China, coinciding with the Lunar New Year holiday when hundreds of millions travel across the country in planes, trains and buses for family reunions.

The holiday was scheduled to end on Friday, but it was extended to Monday to give authorities more time to try and deal with the crisis.

While Hubei and some major cities, including Shanghai, extended the holiday, many people were ending their forced vacation on Sunday.

One 22-year-old arriving at a Beijing train station from northeastern China said her family tried to ask her to delay her return.

“But I was worried it would affect my job,”she said.

But others were staying put.

“This is the saddest New Year I can remember, said 25-year-old Maggie Le, who said she had delayed her return to work from Zhejiang province to Shenzhen by nearly two weeks.

A 48-year-old tailor named Hu from eastern Anhui province has a shop to run in Beijing.

“But there is no hurry,”Hu told Agence France-Presse. “I will only go back when the epidemic is over.”