The ban on travel from China is meant to stop the contagion from spreading in the Philippines as authorities track down other passengers on flights taken by two positive cases in the country.
By: The Inquirer Staff - @inquirerdotnet
Philippine Daily Inquirer / 04:58 AM February 03, 2020

MANILA, Philippines — President Rodrigo Duterte on Sunday ordered a ban on travel to the Philippines by foreigners coming from China, a day before he meets with health officials on the new coronavirus epidemic that has killed 304 people and sickened 14,500 others in China and spread to 24 other countries.

Malacañang announced the ban on Sunday morning, 20 minutes before the Department of Health (DOH) reported the first overseas death from the epidemic.

The DOH said a 44-year-old man from Wuhan in central Hubei province, the epicenter of the outbreak, had died after developing severe pneumonia.

It was the first death out of more than 130 cases reported in around two dozen countries and regions outside of mainland China.

The man who died was a companion of a 38-year-old Chinese woman, also from Wuhan, who was the first and only other person to test positive for the virus in the Philippines.

Both patients arrived in the Philippines via Hong Kong on Jan. 21.

The Inter-Agency Task Force for the Management of Emerging Infectious Diseases recommended “guidelines,”which Executive Secretary Salvador Medialdea said in a statement the President “immediately approved”for the safety of the Filipino people and everyone in the country and after advice from the DOH “that the virus has affected all regions of China.” 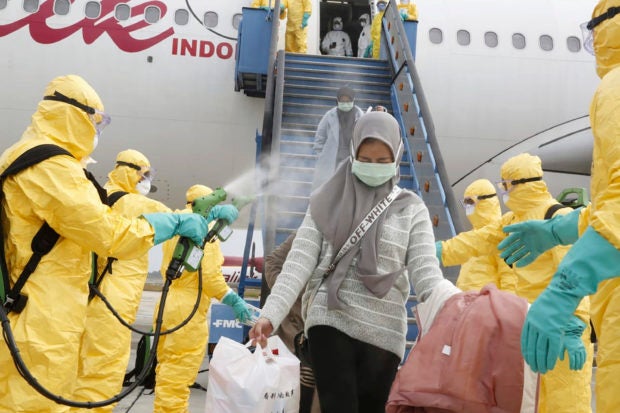 In this photo released by Indonesian Foreign Ministry, Indonesian people who arrived from Wuhan, China, are sprayed antiseptic at Hang Nadim Airport in Batam, Indonesia Sunday, Feb. 2, 2020. Indonesians evacuated from Wuhan, the Chinese city at the center of a deadly virus outbreak, were transported to a quarantine zone on a remote island at the edge of the South China Sea, shortly after landed on Batam, an island near Singapore on Sunday morning. (Indonesian Foreign Ministry via AP)

Banned temporarily from entering the Philippines are people, regardless of nationality, directly coming from China, Hong Kong and Macau. Exempted are Filipinos and Philippine permanent resident visa holders.

Also banned temporarily from entering the Philippines are people, regardless of nationality, who traveled to China, Hong Kong or Macau in the last 14 days. Exempted are Filipinos and Philippine permanent resident visa holders.

But Filipinos and Philippine permanent visa holders coming home from visits to China, Hong Kong or Macau will be required to undergo quarantine for 14 days.

The Bureau of Immigration said it would implement the President’s order immediately.

It said it had sent notices to airlines and shipping companies operating into the Philippines requesting them to screen their passengers before boarding to prevent landing in the country of those who had traveled to China, Hong Kong or Macau.

The Civil Aeronautics Board (CAB) also said it had directed all airlines operating into the Philippines to bar the entry into the country of travelers who had been to China and its two special administrative regions.

It also directed Filipinos not to travel to China and the two regions.

Several flights from Hong Kong landed at Ninoy Aquino International Airport in Manila on Sunday morning after the President’s order began to be enforced.

One of them was a Cathay Pacific flight that arrived at 11 a.m. A commotion broke out when foreigners were not allowed to disembark and ordered to go back to Hong Kong instead.

“Even those who came from the United States, and the plane was just a connecting flight from Hong Kong, were barred. Passengers were crying,” a source told the Inquirer.

Travelers who had no visas were also told to return to Hong Kong.

The foreign travelers aired their grievances on social media, complaining about the abrupt enforcement of the directive. But Ed Monreal, Manila International Airport Authority general manager, said, “We are just implementing [the order] given to us.”

The Department of Tourism said it had relayed the order to its offices in China. It also called on the travel industry to support the order.

The WHO on Thursday declared the outbreak a public health emergency of international concern, but said global trade and travel restrictions were not needed.

Sen. Christopher “Bong” Go, head of the Senate health committee, on Sunday said he had spoken to the President about measures the government should take to halt the spread of the virus in the Philippines.

Go, Vice President Leni Robredo and Sen. Francis Pangilinan were among the officials who had urged Duterte to immediately prohibit the entry of travelers from China to prevent the contagion from reaching the country.

“Taking into consideration the concerns raised by key government officials and health experts, the President made an informed decision and has agreed to adopt this recommendation and implement it immediately,” Go said in a statement.

“I wish to emphasize that we are not singling out Chinese nationals. This order covers all travelers from China to the Philippines regardless of nationality,”he said.

Apparently fed up with criticisms on social media of the government’s slow response to the epidemic, Go said in a radio interview that netizens were welcome to attend the Senate hearing that he had called for Tuesday.

“To the bashers (on social media), you are invited to join the hearing and tell all the things you want to say to our (government) officials. Tell it straight to their face,”Go said.

At a news conference where the DOH reported the first overseas death from the epidemic, Health Secretary Francisco Duque III said the government was coordinating with the Chinese Embassy for the repatriation of the body of the man from Wuhan who died.

The man’s companion, the first reported case of the new virus in the Philippines, has no more symptoms of the infection such as fever and cough, but has not yet been discharged, DOH spokesperson Eric Domingo said.

As of Saturday, Domingo said 30 other people under medical observation had tested negative for the new coronavirus and four were waiting for the results of their tests.

Among those who tested negative for the virus was the 29-year-old man from Wuhan who died of pneumonia at San Lazaro Hospital on Wednesday.

Duque said the DOH was tracking down the passengers on the flights that brought the two positive cases into the Philippines.—Reports from Julie M. Aurelio, Tina G. Santos, Dexter Cabalza, Marlon Ramos and the wires