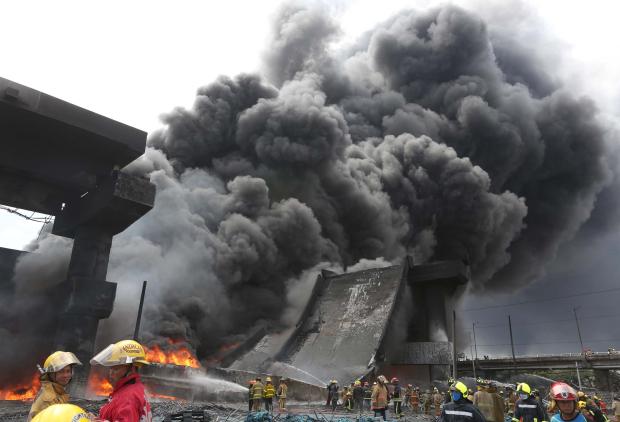 A portion of the Skyway extension project collapsed after its foundation was weakened by a massive fire near the elevated highway. (Photo by MARIANNE BERMUDEZ / Philippine Daily Inquirer)

MANILA, Philippines — A fire razed a plastics plant and warehouse in Pandacan, Manila, causing a portion of the nearby Skyway extension project undergoing construction to collapse on Saturday noon.

The fire spread to the nearby Skyway Stage 3 project, which was being constructed by the SMC conglomerate.

The Bureau of Fire Protection (BFP) declared Task Force Bravo at 11:05 a.m. A total of 76 fire trucks from the BFP, city government responders and volunteer firefighters responded to the fire.

The fire reportedly originated from a stack of plastic crates placed on an open space near the Skyway project.

Responders had to use foam concentrate to put out the fire.

An estimated P15 million worth of property went up in smoke. This included a portion of the Skyway extension project, which was a few hundred meters from the plant.

“It was really hot here that the foundation of the Skyway weakened. Portions of the road were made of steel were damaged,” Samillano said.

He added that thick black smoke covered the area so responders did not get a full view when a section of the elevated road fell.

There were no reports of injuries as workers of the Skyway and the plant were evacuated, Samillano said.

The cause of the fire remains under investigation, but the BFP had received reports of welding operations in the plant.