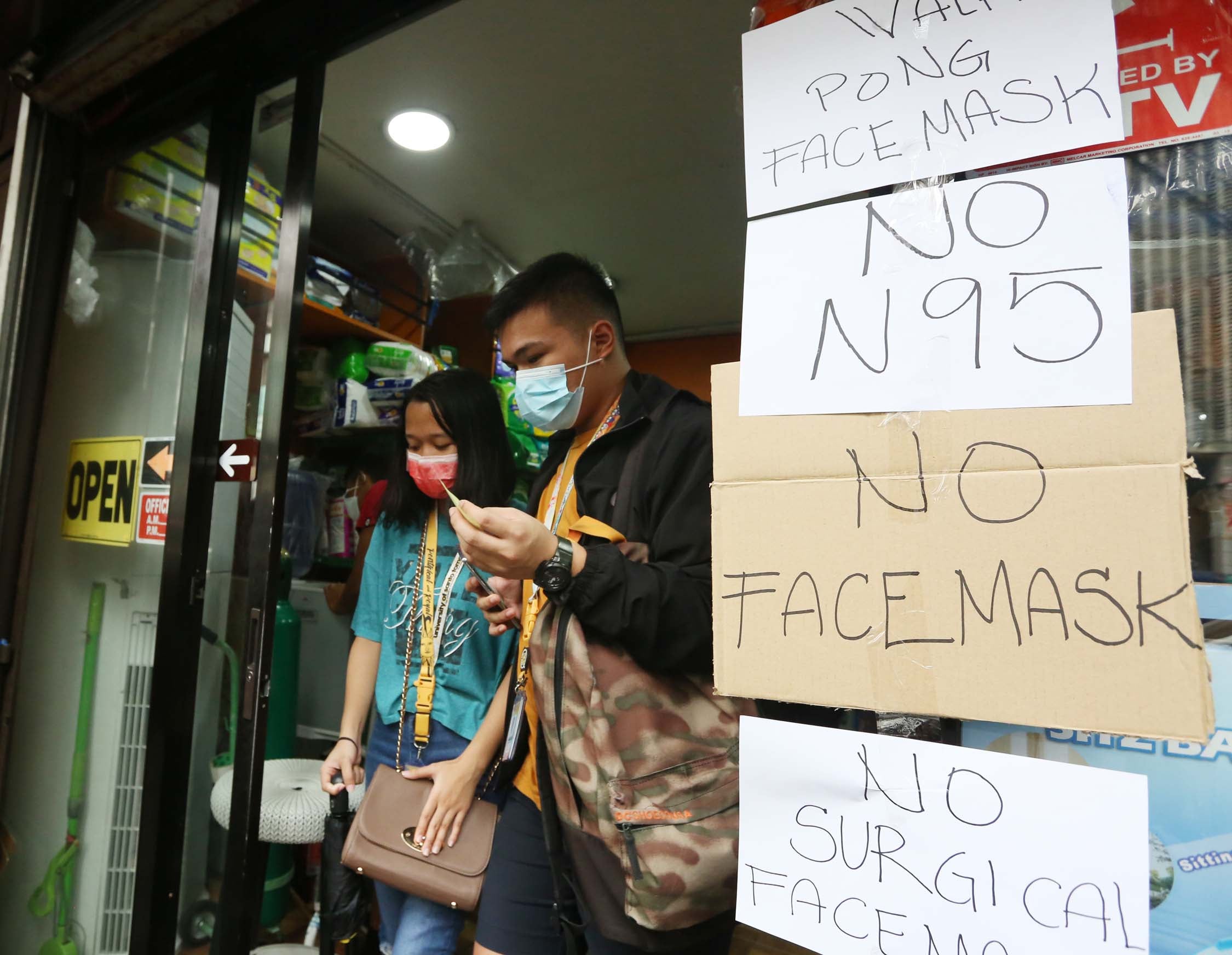 SHORTAGE. The stocks of face masks in several medical stores in Bambang, Sta. Cruz, Manila and across the country have run out following DOH’s confirmation of the first nCoV case in the country. INQUIRER\/ MARIANNE BERMUDEZ

The World Health Organization (WHO) also declared the outbreak, which originated in Wuhan, China, a global public health emergency.

In this city, for instance, local officials have drawn up public health protocols since it hosts an online gaming site that employs about 2,000 to 3,000 Chinese workers.

While the DOH in Cavite, Laguna, Batangas, Rizal and Quezon (Calabarzon) had yet to monitor any suspected case of nCoV, Biñan City Mayor Walfredo Dimaguila Jr. said they had come up with preventive measures as the city had scheduled festivities for its foundation day next week.

Among these were to provide hazmat suits for emergency responders and designate two city ambulances to respond specifically to nCoV cases.

“I’ve talked to the HR (human resources personnel of Pogo workers) who also happened to be Filipinos, and we had asked them to put up their own cli­nic [inside their hub],” Dimaguila told the Inquirer by telephone.

Thousands of Chinese nationals had been living here since about two years ago, around the same time a lifestyle mall with condominiums rose at Barangay San Francisco to cater to them.

In Kawit, Cavite province, the local government met with owners of business establishments, especially those employing Chinese nationals, to discuss preventive measures should nCoV cases arise in the town.

Among these establishments is the First Orient International Ventures Corp., which employs about 8,000 Chinese.

According to the municipal communication officer, Bran Reluao, First Orient said it would not allow the hiring or entry of new Chinese workers amid the outbreak. The company also installed a thermal scanner to monitor the temperature of its employees and distributed face masks within the company.

Provincial board member Ryan Maminta, who earlier sought for international flight cancellation, welcomed the development that he said would “mitigate the effect of the nCoV outbreak.”

The Cagayan Economic Zone Authority also suspended all chartered flights from Macau and other parts of China to Cagayan North International Airport in Lallo town.

The municipal government of Mobo in Masbate province denied reports that a ship carrying Chinese workers would dock at a pier owned by a local businessman.

In Albay province, health officials also denied reports that a Chinese national who sought treatment at a mall clinic showed symptoms of nCoV.

In Oriental Mindoro pro­vince, Gov. Humerlito Dolor directed the provincial health office to formulate and implement a comprehensive action plan to prevent the spread of nCoV in the province. 2 isolated in SubicIn Angeles City, the local government made available hand sanitizers and gave free face masks to its employees.

Mayor Carmelo Lazatin Jr. said these were part of the preventive measures amid the global outbreak sparked by the deadly virus.

Although they did not show symptoms of nCoV infection, they were placed in isolation at a facility inside the free port to ensure they would not pose health risks.

In Isabela province, stores ran out of their stock of face masks as soon as the first case of nCoV in the country was confirmed on Thursday.

Jonathan Maramag, a salesman at a private drug store in the City of Ilagan, said they had sold 50,000 masks and were now waiting for more supplies.

In Benguet province, Edu­cation Secretary Leonor Briones said she saw no reason to cancel events involving mass gatherings of students and teachers due to the nCoV. Briones was the guest speaker during the launch of the “Read to Lead” project of the Department of Education in Cordillera. —WITH REPORTS FROM ROMAR MIRANDA, SUZENE CAJEGAS, MAR S. ARGUELLES, MADONNA T. VIROLA, TONETTE OREJAS, JOANNA ROSE AGLIBOT, VILLAMOR VISAYA JR., YOLANDA SOTELO AND KARLSTON LAPNITEN