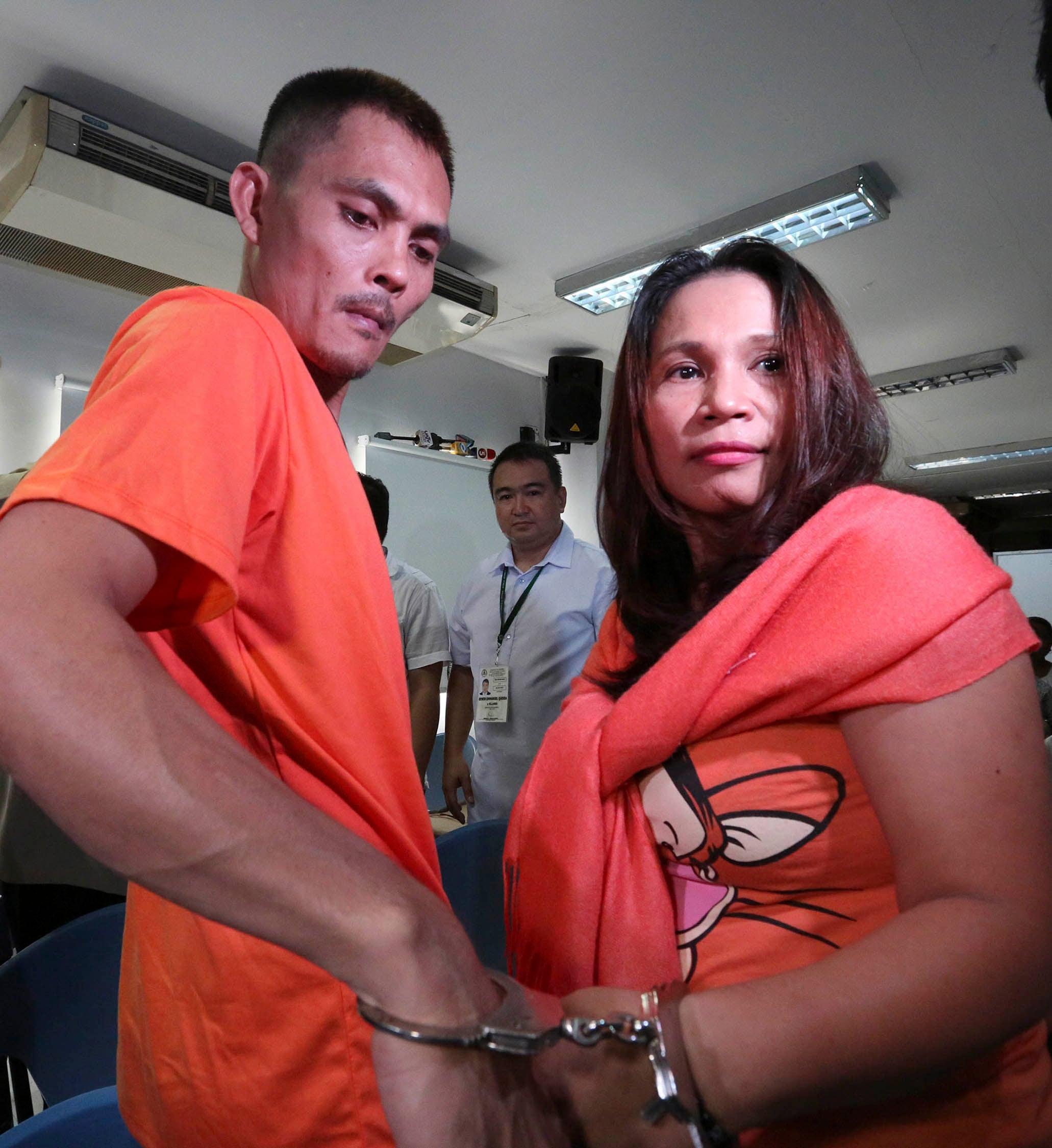 ILLEGAL RECRUITERS Julius Lacanilao and his live-in partner, Cristina Sergio, appear at the Department of Justice in this May 2015 file photo.

The decision, handed down by the regional trial court (RTC) here on Thursday, could boost efforts to remove her from death row in Indonesia, Veloso’s lawyers said.

Presiding Judge Anarica Castillo-Reyes of RTC Branch 88 sentenced Cristina Sergio and Julius Lacanilao after they were found guilty of large-scale illegal recruitment, one of three charges filed against them by Veloso’s neighbors in Nueva Ecija province.

“That is welcome, because the transgressors of the law have been convicted,” said presidential spokesperson Salvador Panelo.

But he said Veloso’s lawyers could not use their conviction to appeal for her acquittal before an Indonesian court.

In a press briefing on Thursday, Panelo said there was no connection between the illegal recruitment charge against the accused and the drug trafficking case against Veloso.

“She’s being charged with a crime there. Nothing to do with the conviction of the traffickers here,” he said.

This was because the recruiters were convicted for a case not filed by Veloso, but by three other victims, Panelo said.

Sergio and Lacanilao were tried for luring several Nueva Ecija residents into working abroad even though they had no license to handle overseas job placements.

The Veloso family had said the case would bring to light its argument that she was a victim of human trafficking and had not been aware she was carrying illegal drugs in a traveling bag on her way to Indonesia in April 2010.

Veloso was arrested at the Yogyakarta airport after being caught with a suitcase containing 2.2 kg of heroin.

She was sentenced to death by firing squad in 2015 but was given a reprieve by Indonesian President Joko Widodo on the request of then President Benigno Aquino III, to allow her to offer testimony against Sergio and Lacanilao, who had surrendered in Manila.

In her decision, Reyes said the prosecutor “mustered sufficient evidence to secure a guilty verdict,” while the defense and the accused only “relied on denial” that they were in the business of recruiting people to work abroad.

Reyes said denial “is an inherently weak defense” and “cannot prevail over the positive testimonies of prosecution witnesses.”

Sergio and Lacanilao were also ordered to pay a fine of P2 million.

Celia, Veloso’s mother, said she felt happy and believed that her daughter’s freedom was already within reach.

Although thankful for the ruling, Veloso’s father, Cesar, said he could not help but worry about his daughter still being on death row.

“I hope she gets a parole,” Cesar told the Inquirer.

The private prosecutors from the National Union of Peoples’ Lawyers (NUPL) said they were happy with the ruling on the case filed by Lorna Valino, Ana Marie Gonzales and Jenalyn Paraiso.

NUPL also serves as a private counsel for Veloso in prosecuting Sergio and Lacanilao.

Lawyer Josalee Deinla, NUPL spokesperson, said justice had been served “even if only partially and initially through Mary Jane’s fellow victims.”

“We believe that Sergio and Lacanilao’s conviction stands as a testament to Mary Jane’s story—that she was not a drug courier but an unwitting victim of the same illegal recruiters,” Deinla said.

She said the recruiters’ guilty conviction had strengthened their hope that Veloso would be freed for humanitarian reason.

“The Indonesian government may see this development to consider clemency or commutation of sentence and free her (Veloso),” Deinla told reporters here.

The NUPL said, “We look forward to the full achievement of justice when the other separate cases of Mary Jane against the same recruiters for human trafficking, simple illegal recruitment and estafa in the same court are resolved and she herself is ultimately and finally sent home free in time.”

“Let us now hear her story through deposition as allowed by the same trial court and the Supreme Court itself,” it added.

On Oct. 11 last year, the Supreme Court allowed the taking of Veloso’s testimony against her recruiters by way of deposition in Indonesia.

It reversed the ruling of Court of Appeals that barred Veloso from testifying through a written deposition.

NUPL President Edre Olalia acknowledged that while “strictly and legally speaking” the case promulgated on Thursday had no direct bearing on Veloso’s case, the conviction established a pattern.

“Factually, this first conviction proves a scheme, pattern or modus operandi present in both [cases],” Olalia told the Inquirer.

In addition to establishing the illegal recruiters’ modus, Olalia said the conviction could be a “triggering point” to seek clemency for Veloso.