MANILA, Philippines–The Department of Health announced Thursday that a Chinese woman is the country’s first confirmed case of the novel coronavirus infection.

“Today the DOH is confirming that a Chinese female patient under investigation is positive for novel coronavirus 2019 after her lab results arrived from the Victorian Infectious Disease Reference Laboratory in Melbourne, Australia,” Health Secretary Francisco Duque III said in a press briefing.

Laboratory results arrived from Australia on Thursday,  showing that the 38-years-old Chinese is positive for the deadly virus.

Duque said the woman had traveled to the Philippines from Wuhan, China, via Hong Kong on January 21. She sought treatment on January 25 due to a mild cough. 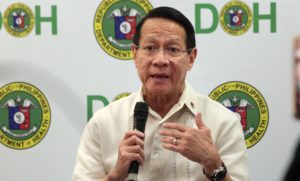 “We are working closely with the hospital where the patient is admitted and have activated the Incident Command System of the said hospital for appropriate management, specifically on infection control, case management, and containment,” he said.

Dr. Ferchito Avelino, officer-in-charge of DOH Epidemiology Bureau, said during the press briefing that the Chinese national, who is in the country as a tourist, had been to Dumaguete and Cebu.

The woman was also “asymptomatic” which means that the patient showed no signs of fever and “no symptoms suggesting illness,” Duque added.

Duque said the woman was hospitalized somewhere in Manila. The location was not disclosed to ensure the safety of the patient.

He urged the Filipinos to “stay calm and remain vigilant at all times.”

“I assure the public that the Department of Health is on top of this evolving situation. We were able to detect the first confirmed case because of our strong surveillance system, close coordination with World Health Organization and other national agencies, and the utilization of DOH’s decision tool,” he said.

The DOH has recorded a total of 29 patients under observation: 18 in Metro Manila, four in Central Visayas, three in Western Visayas, one in Mimaropa, one in Eastern Visayas, one in Northern Mindanao, and one in Davao. Twenty-three persons are currently admitted and five have been discharged but are still under strict monitoring.

Avelino said that the Bureau of Quarantine has been advised to provide the flight details of the patient.

“We coordinated with region VII [as] we are looking at the places where they [patient] have been to in Cebu and in Dumaguete. Once we have seen and the list of these places then we can do contact tracing,” he said.

The World Health Organization has defined contact tracing as “people in close contact with someone who is infected with a virus, such as the Ebola virus, are at higher risk of becoming infected themselves, and of potentially further infecting others.”

The outbreak of the new type of coronavirus surfaced in the central city of Wuhan in December.

The death toll due to the new virus outbreak increased to 170 in China. The nCoV, which was first discovered in the Chinese city of Wuhan, had infected over 7,000 in China.