PARIS  — French President Emmanuel Macron on Wednesday accused Turkey of breaching an agreement to halt foreign interference in Libya by sending warships and mercenaries to the North African country. 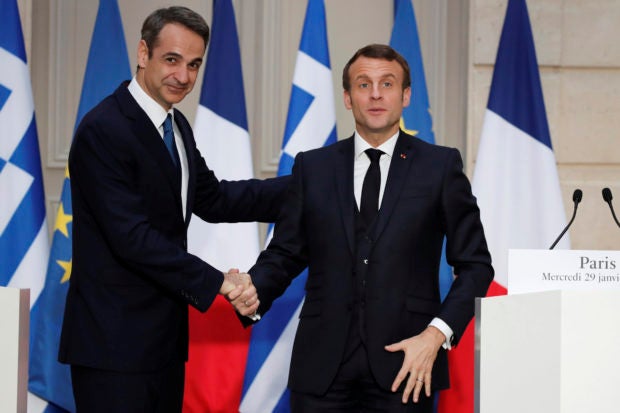 Following a meeting with Greek Prime Minister Kyriakos Mitsotakis, Macron also described a maritime deal between Turkey and Libya’s U.N.-backed government as a “void document” with no legal or political standing.

“These past few days we have seen Turkish warships accompanied by Syrian mercenaries arrive on Libyan soil.

This is a serious and explicit infringement of what was agreed upon in Berlin,” Macron said, referring to an international summit in the German capital earlier this month.

Earlier Wednesday, the Turkish military said four frigates and a refuelling vessel were in the central Mediterranean, outside Libya’s territorial waters, to support NATO operations in the region while also conducting activities to ensure the security of maritime trade routes.

Turkey supports the weak U.N.-recognized administration in the capital of Tripoli led by Prime Minister Fayez Sarraj, while France backs a rival government in the east aligned with the self-styled Libyan Arab Armed Forces led by Gen. Khalifa Hifter.

Macron dismissed a maritime deal between Turkey and Sarraj’s government last year that would give Turkey and Libya access to an economic zone despite the objections of Greece, Egypt and Cyprus, which lie between the two geographically.

“France supports Greece and Cyprus with regards to the sovereignty in their maritime zones and, along with our European partners, condemns Turkey’s intrusions and provocations,” Macron said.

“I must reiterate that the prerequisite for any political solution in Libya is the cancellation of this document,” he added.

Turkey accused Macron of making “unrealistic claims” against Ankara and holding France responsible for the crisis in Libya.

“It is no secret that (France) gave unconditional support to Hifter in order to have a say concerning Libya’s natural resources,” the Turkish Foreign Ministry said in a statement. “Hifter’s attacks on the legitimate government, with the help of the military support of countries including France, pose the most serious threat to Libya’s territorial integrity and sovereignty.”

It added that “what is expected of France is to assume a positive role for stability and security in Libya, instead of blaming Turkey.”