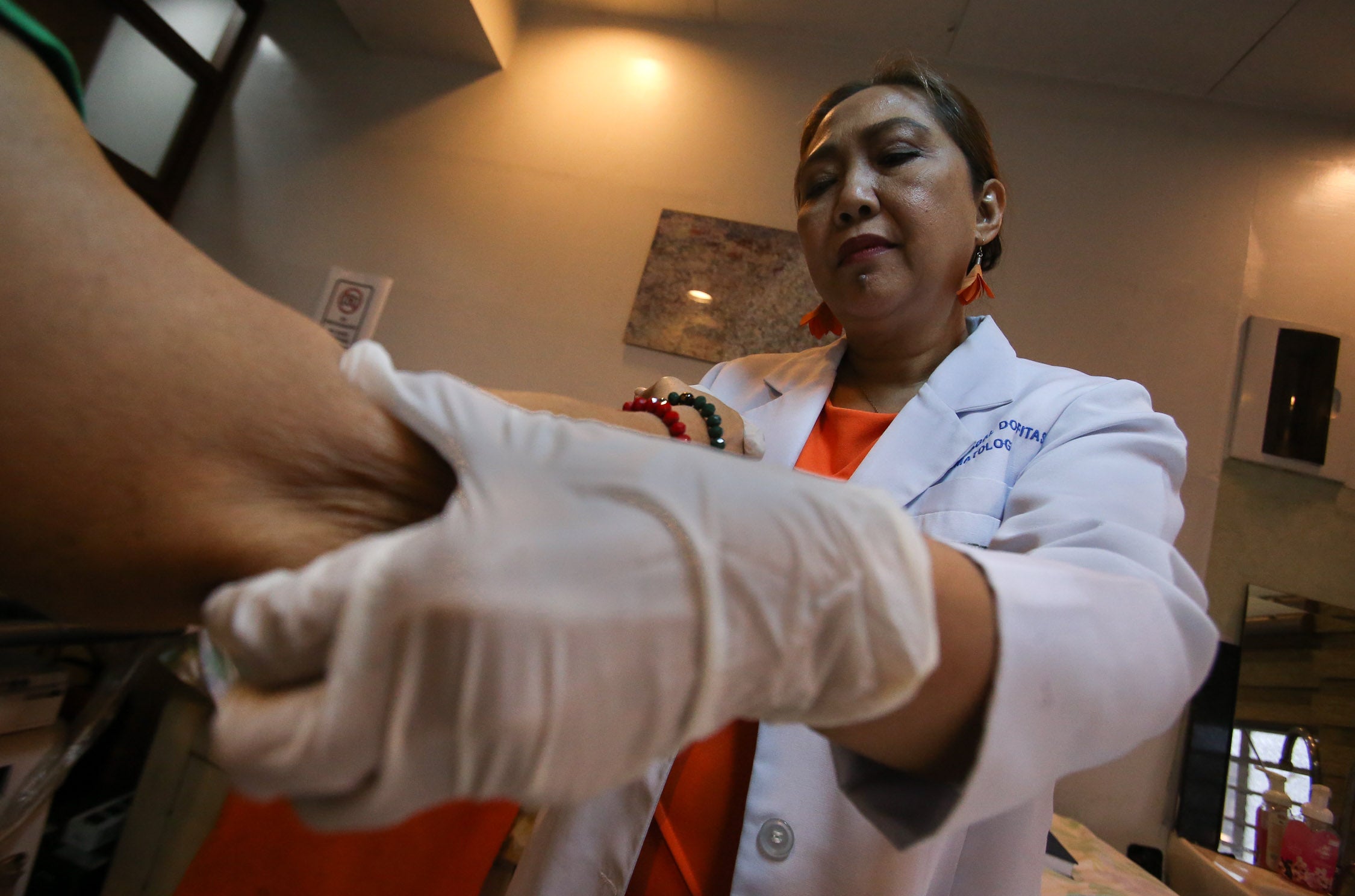 A tropical skin disease thought to have been eradicated, or at least controlled, by medical experts in the Philippines in the 1970s continues to lurk in the remotest villages in Mindanao, endangering very young children who are most susceptible to communicable ailments.

The World Health Organization (WHO) refers to the highly infectious skin disease as yaws, and the locals call it “bakataw.”

Usually spread among children at play through contact between an infected person’s skin lesion and another’s existing cut or scratch, the infection initially appears as pink bumps that grow and spread all over the face and body.

The bumps evolve into crusty yellow ulcers that look like moist cauliflower with a pink base. As the infection worsens, the ulcers dig deeper into the skin. Joints and bones are damaged when the condition remains untreated.

In some cases, lesions spread on the soles of the feet and make walking difficult. The rural folk call these foot lesions “pamali.”

Dr. Belen Lardizabal Dofitas of the Philippine General Hospital Division of Dermatology warned that while yaws caused by bacteria called Treponema pallidum pertenue could be addressed by antibiotics, it could jeopardize future employment opportunities because of a simple blood test error.

According to Dofitas, the yaws-causing bacteria are often mistaken for another subspecies called Treponema pallidum pallidum that cause syphilis, a sexually transmitted disease.

She said she knew of many cases in which those who caught yaws as children were turned down for overseas employment because their blood exams inadvertently reported that they had or still have syphilis.

“It is not usually known that pallidum has two subspecies that appear very identical. Yaws is nonvenereal and the two subspecies can only be differentiated by a special test called polymerase chain reaction that can only be done in select research centers,” she said.

Dofitas, president of the Philippine Leprosy Mission board of trustees, is at the forefront of the effort to record yaws cases nationwide so that its continued presence can be officially confirmed. The study is aimed at establishing a baseline to be used by the Department of Health (DOH) to set up an annual budget that would provide logistics to address the disease and find means to spread public awareness and aid prevention.

The presence of yaws in the country was first established in the mid-20th century. With the help of Unicef, the Philippines launched the First National Yaws Control Project in 1951. Per records, 69,000 were treated among 833,000 persons examined all over the country. In 1960, the number of patients treated was 193 among 2 million examined.

“This already reflected a shift toward eradication. Patients were given injectable penicillin. But there is a stage of latency where the disease becomes undetected (known as secondary yaws),” Dofitas said.

“This could be because more cases were detected and brought to the attention of health officials as they come from the field. But the reporting stopped officially at some point,” Dofitas said.

In the early 2000s, Dofitas conducted fieldwork in Mindanao for a study on Filipinos’ health-seeking behaviors on skin diseases. While her focus was on leprosy and less serious infections like “an-an,” health workers volunteered yaws patients, some very young children, for her examination.

Dofitas said she confirmed 82 yaws patients, representing 11.7 percent of the 698 skin-related cases that she encountered then. Nearly all of them were children 15 years old or younger.

“The Philippines is the 14th country endemic for yaws. It was never really eradicated and it is possible that other countries could be having the same experience,” she noted.

Jan. 30 has been set by WHO as the inaugural World Neglected Tropical Diseases (NTD) Day.

While yaws is an NTD, the DOH has yet to establish an official control program for it. Dofitas will include yaws among the skin diseases in her World NTD Day presentation on Thursday morning, titled “Lost And Found: Skin Neglected Tropical Diseases in the Philippines” in Quezon City.

Dofitas recalled that in 2012 and 2013, a government pathologist based in Mindanao confirmed that yaws cases were still being detected there. The blood tests conducted by Dr. Sherjan Kalim showed latent cases in two Mindanao provinces.

“The DOH is convinced about the presence of yaws in 2017,” the dermatologist said. “It afflicts the impoverished, those who have no access to health services. WHO considers yaws potentially eradicable, but mass treatment is required. One active yaws case already makes a community endemic. But while there is no program yet, World NTD Day is a final push for awareness, control and eradication.”

Dofitas said she was especially concerned about the psychosocial and economic issues accompanying blood samples taken from yaws patients interpreted as syphilis infection.

“Patients seeking employment ask for a certification that what they have is yaws acquired in childhood, and not a sexually transmitted disease. Patients deny having sexual contact, and it is unfortunate that some doctors are also not aware that yaws is the cause of those blood exam results,” she said.

Data gathering“Yaws is unique because people at present do not recognize its dire socioeconomic consequences, but those afflicted should not suffer discrimination,” she said.Dofitas’ effort involves data gathering from health practitioners, private doctors, nurses and even officials of the Department of Education in an attempt to record cases, including those in Luzon and the Visayas.

“We need people to come forward, we want to reach out to them,” she said. “The study is ongoing and I am trying to reach as many practitioners as I can—government doctors, dermatologists nationwide, health center staff, municipal health offices and even health center physicians. We need scientific evidence to help people with yaws.”