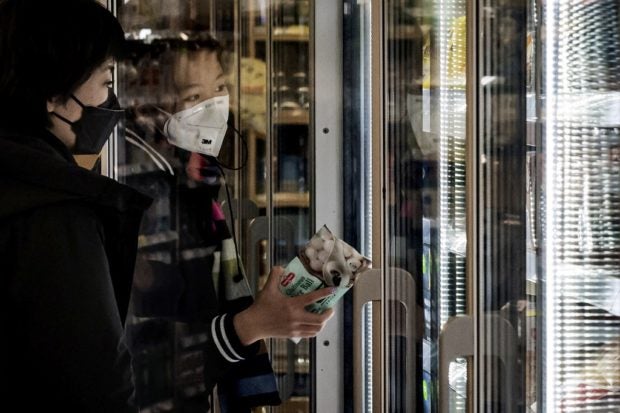 A woman (L) looks on as a young woman (C) opens the door of a refrigirator to get a frozen item as they both wear protective masks to help stop the spread of a deadly virus which began in Wuhan, at a supermarket in Beijing on January 28, 2020. Photo by NICOLAS ASFOURI / AFP

BEIJING — At a deserted restaurant in China’s capital, one black-and-white sign stands out among colorful the decor and neon signs advertising braised meat dishes: “This store has been disinfected today.”

People in Beijing and across China were donning masks, spraying antiseptic, and staying off the streets in a battle to halt the spread of a viral outbreak that has killed more than 130 people nationwide and gripped the country with fear of getting sick.

Authorities were disinfecting trains and planes while people are encouraged to stay home during the Lunar New Year holiday or wear masks if they go out.

Businesses like the Hao Lu Wei braised meat restaurant, located in an eerily quiet mall in central Beijing, were scrubbing their facilities to reassure wary customers. Many others have just remained shut.

“Please be assured while shopping that our store has been comprehensively disinfected, and have a Happy New Year!” read a sign in the window of a glasses store, devoid of patrons.

The capital of 20 million people is normally quiet around the holiday as migrant workers return home to visit family, but news of the rapidly spreading infection has left malls and boulevards exceptionally silent.

Anxious shoppers desperate to protect themselves from infection have stripped stores of hand sanitizers.

“There has been nothing since before the New Year,” said Li, a 35-year-old pharmacist clad in a thick face mask, turning away a delivery driver looking to fetch rubbing alcohol on behalf of a customer waiting at home.

Health workers in hazmat suits have set up screening checkpoints at subway station entrances, while officers at one police station forbade entry without temperature checks.

Some residential buildings were checking the temperatures of visitors.

Only a handful of patrons milled through the upscale Taikoo Li shopping center on Tuesday, as security staff posted signs urging shoppers to cover their faces and the smell of disinfectant hung thick in the air.

Other local governments have issued similar edicts across the country, prompting authorities to rush to ensure factories can churn out more masks.

Even more drastic measures have been taken in Wuhan, the industrial city in central China where the new coronavirus outbreak was first detected.

It – and several neighbouring cities in Hubei province – have been almost completely sealed off, with authorities grounding flights, halting trains and banning car travel for more than 50 million people.

‘We try to stay home’

Some in China have coped with the boredom of being confined to their homes through wry social media posts.

One video circulating on the messaging app WeChat shows a group of middle-aged men and women playing mahjong while wearing masks – and transparent plastic bags covering their heads.

A popular meme shared on the platform, as well as other social media networks, shows a well-known dinner scene from “My Fair Princess” – a popular 1990s TV costume drama – with surgical masks photoshopped onto the actors’ faces.

In another widely circulated image, a man protects himself from the virus by wearing two surgical masks covering his entire face, with holes cut out for his eyes.

On the streets of Beijing, not everyone has fallen victim to the anxiety sweeping the country.

One couple in their 30s stood on the street in the city’s otherwise empty Sanlitun entertainment district and removed their face masks to smoke cigarettes.

The man carried several plush toys won from the claw machine games inside a nearby arcade. He said he assumed the machines were being disinfected regularly but wasn’t sure.

“We came here because we don’t know what else to do,” the man, who asked not to be named, told AFP.

“We try to stay at home as much as possible,” he added.