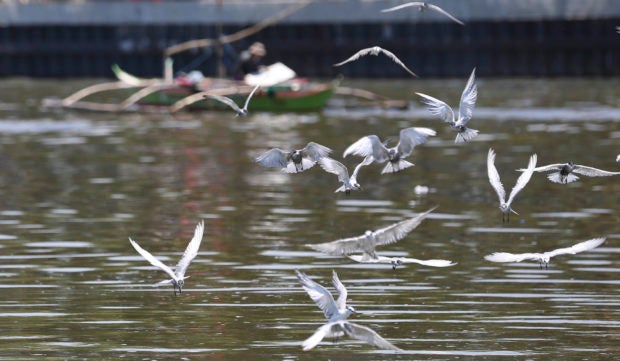 VULNERABLE Environmentalists have warned against coastal development projects that could disrupt the habitat and food source of migratory birds passing over Manila Bay, like this flock spotted off Freedom Island in Parañaque City in April last year. —JOAN BONDOC

Land reclamation projects on Manila Bay threaten to displace as many as 200,000 waterbirds that pass through the country during their migration in winter months, according to the Wild Bird Club of the Philippines (WBCP).

These birds include several endangered and vulnerable species whose fragile populations may be decimated once coastal development projects push through in Metro Manila, Bulacan and Cavite provinces, and other areas.

“They can really be pushed to extinction,” said Cristina Cinco, WBCP vice president, in an interview on Tuesday. “Similar to a food chain, once you cut one, the others [in the system] will be affected.”

Among the bigger projects is the proposed international airport in Bulacan province, which experts say will destroy hectares of mangroves and worsen flooding in coastal towns.

Cinco said this development was also expected to adversely impact thousands of waterbirds that stopover on Manila Bay to feed and roost on its coastlines, mudflats and mangroves.

At least 16 waterbird species congregate on the bay during midwinter months, according to the WBCP, and at least 12 of the species, including the endangered Far Eastern curlew (Numenius madagascariensis), vulnerable Chinese egret (Egretta eulophotes) and near threatened bar-tailed godwit (Limosa lapponica), are considered of international importance because of their decreasing population.

In its most recent Asian Waterbird Census earlier this month, the WBCP observed a record number of black-faced spoonbills (Platalea minor). The bird is listed as endangered by the International Union for the Conservation of Nature.

A total of 24 spoonbills were seen feeding and resting along the tidal flats and mangrove areas in Barangay Taliptip in Bulakan, Bulacan—just “in the backyard” of the proposed international airport, Cinco said.

Before its last sighting in 2019 in Sasmuan, Pampanga province, the rare bird had not been seen for over a century on Manila Bay.

“Birds are the No. 1 bioindicator, meaning if you have birds present, you have clean water, clean air and basic food,” Cinco said. “What is good for the birds are good for the people … Why ruin a perfectly good environment?”

The Philippines is part of the flight path of some 50 million birds that take the East Asian-Australasian Flyway, which stretches from Russia and Alaska at the northern end, to Australia and New Zealand at the southern end.

The Philippines is a stopover for at least 13.5 million migratory birds, feeding before continuing their long-haul flights over 22 countries.

Environmentalists have also expressed concern over the effect of reclamation projects on fish stocks in Manila Bay.

Though the bay is heavily polluted, many municipal fishermen still rely on it for their livelihood, with sardines as their main catch.

“[Since] they will be disturbed, the concentration of fish eggs and larvae in the bay will be gone,” said Elsa Furio, senior research specialist at the National Fisheries Research and Development Institute of the Department of Agriculture.

“They might transfer to other areas but that will take time. Some of them might be gone forever,” she said. INQ