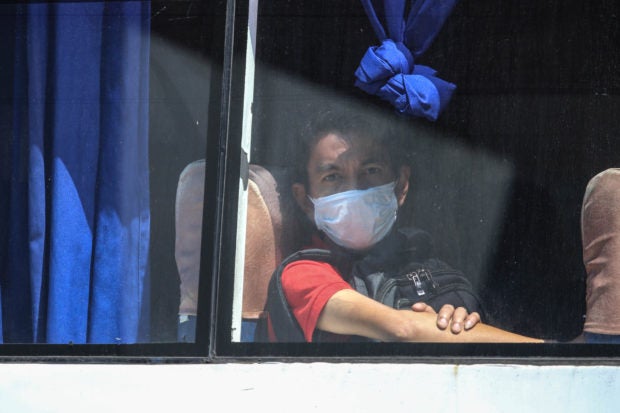 BETTER SAFE THAN SORRY A bus passenger on Edsa in Quezon City is not taking any chances on Tuesday even with the country still without a confirmed case of the new coronavirus infection. —JAM STA. ROSA

Malacañang should consider banning travel to the Philippines by Chinese from Wuhan and other cities in China where there are confirmed cases of a pneumonia-like illness caused by a new coronavirus that has already killed 106 Chinese, sickened more than 4,500 others, and spread to over a dozen other countries, senators said on Tuesday.

The Bureau of Immigration on Tuesday stopped issuing visas on arrival to Chinese nationals, in a bid to keep the Philippines free of the new virus.

But Immigration Commissioner Jaime Morente said in a statement that there was no order barring Chinese nationals from entering the country.

Sen. Christopher “Bong” Go, head of the Senate health committee, said the Department of Health (DOH), Department of Foreign Affairs (DFA) and other concerned state agencies should enforce stricter measures to keep the new virus—officially called 2019-nCoV—out of the Philippines.

“For me, we must implement all the necessary [effective] safety measures. We should not let even a single case [of the new coronavirus infection] here in our country,” Go told reporters.

He, however, said President Rodrigo Duterte was satisfied with the measures taken by health and airport officials to prevent the virus from spreading into the Philippines.

Sen. Francis Pangilinan echoed Go’s sentiments, noting that an average of 4,800 Chinese tourists had been entering the country every day since January last year.

“While the Philippine health authorities have not confirmed a case of the rapidly [spreading] deadly disease, it is best for them to be more proactive, especially since the country may not be able to contain a full-blown epidemic,” Pangilinan said.

“The progressive spread of the coronavirus and the increasing number of deaths due to it should prompt Philippine health and immigration authorities to preemptively ban visitors from Wuhan [and other] affected [cities in] China,” he added.

Sen. Joel Villanueva also raised a similar concern after a cruise ship carrying about 800 Chinese tourists docked at the Port of Manila on Tuesday.

“If China itself has been locking down their cities, shouldn’t we do the same? For me, that’s [the logical thing] to do,” Villanueva said.

“While there has been no confirmed case of infection [here] yet, it does not mean that the virus has yet to reach our country. Whatever policy the government should adopt to protect us, then let’s do it,” he said.

The MV World Dream docked at Pier 15 in the Port of Manila on Tuesday. It was scheduled to dock at Subic Bay in Zambales province on Wednesday, but a protest by local officials and residents of Olongapo City forced the vessel to cancel its Subic port call.

The Port of Subic has been on high alert since Jan. 6, after the Bureau of Quarantine issued a warning about the new virus that began sickening people in Wuhan, capital city of Hubei province in central China, last month.

China has sealed Wuhan, halting all travel to and out of the city of 11 million since the outbreak began. Public transport has been stopped in 18 other cities in Hubei, with train stations shut, events canceled and theaters, libraries and karaoke bars closed in some locations.

The virus has gotten out, though, with deaths being reported in Beijing and Shanghai on Tuesday, raising the death toll to 106. China’s National Health Commission also reported 4,515 infections.

There have been no reported case of infection in the Philippines, but health authorities said on Tuesday that 24 people were under observation for the illness.

Health Secretary Francisco Duque III told a press briefing that the 24, out of an original 27 and all foreigners, were waiting for the results of lab tests.

The three others had been cleared and discharged, he said.

World Health Organization (WHO) country representative Rabindra Abeyasinghe told the briefing that the mortality rate of the new coronavirus remained 3 percent. The WHO, he said, had recorded 976 severe cases.

Abeyasinghe said the WHO had classified the risk level for the spread of the virus as “very high” in China and “high” at the regional and global levels.

Duque said the DOH was waiting for the arrival of primer or test kits that would help local health authorities diagnose cases without having to send samples to a laboratory in Australia, which takes a long time to return.

“We need to get a hold of this so we can already establish our own capacity to diagnose and to be able to identify that this is the [new] coronavirus,” Duque said, adding that the test kits would arrive in the country within the next 48 hours.

He said the DOH had also convened the Interagency Task Force on Emerging Infectious Diseases, which had decided to ensure support for Filipinos in China and adopt transport and quarantine plans for Filipinos in Hubei who would volunteer to return to the Philippines.

The DFA has asked guidance from the DOH on evacuating Filipinos from China, and Malacañang is waiting for recommendations from the two agencies for keeping the virus out of the Philippines.

On Tuesday, presidential spokesperson Salvador Panelo said he would ask President Duterte if the government would ban travel to China. “If he has any directive, it will be stated immediately for compliance,” Panelo said.

He said, however, that Filipinos who want to avoid getting sick should postpone travel plans to China.

He said the measure followed a similar move in Taiwan, which canceled permits for 429 people on 24 tour groups from Wuhan. He did not say when the facility would be resumed.

Local airlines with services to China are not canceling flights, but they are offering free rebooking to passengers who will postpone their trips or full refunds to those who will cancel their travel plans.

On Monday, Bohol Rep. Erico Aristotle Aumentado introduced a resolution in the House of Representatives for a halt to direct flights to Bohol from China and on Tuesday, the House decided to call Duque to the “Question Hour” on Wednesday to field questions from lawmakers about the scale of the threat posed by the new coronavirus to the Philippines.

House Majority Leader Martin Romualdez had moved for the request to Duque to come to the Question Hour. Romualdez had said Duque would be asked “to answer questions from the members of the House of Representatives pertaining to the measures being undertaken by the Department of Health on the threats of [the new] coronavirus in the country.”

In a statement after his motion, Romualdez said the House was invoking its Question Hour privilege “not in aid of legislation nor for investigation purposes.”

“We are exercising our oversight function to allay the fears of our constituents brought about by reports of the Wuhan virus reaching our shores,” he said.

Chinese tourists accounted for 22 percent of the 7.5 million visitors to the Philippines between January and November last year, making China the biggest generator of foreign travelers to the country.