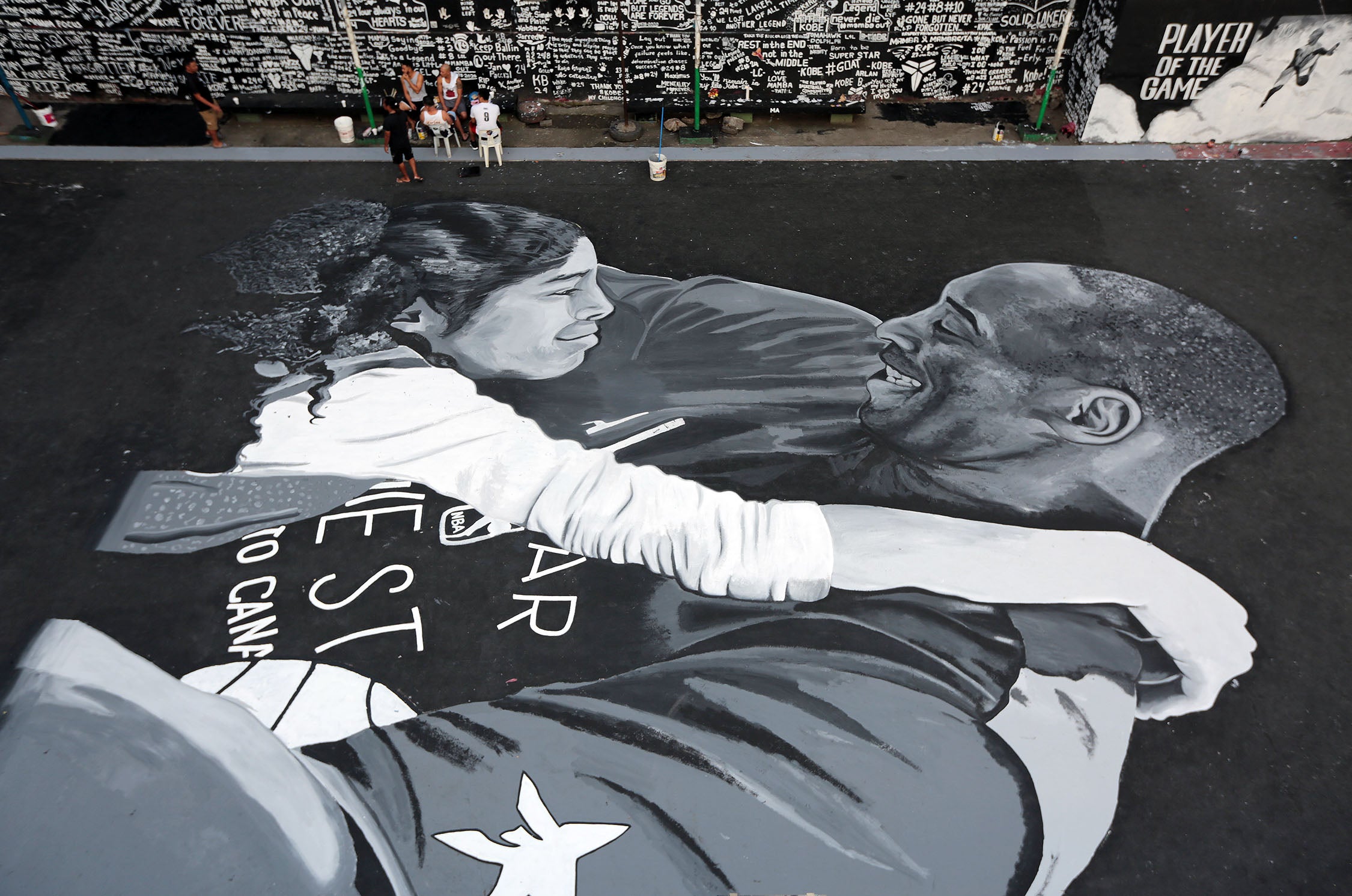 TRIBUTE ART A group of artists which call themselves Tenement Visual Artists worked from 9 a.m. Monday until 3 a.m. the next day on this mural in honor of NBA legend Kobe Bryant and daughter Gianna at the center court of the Tenement housing unit in Taguig City. —GRIG C. MONTEGRANDE

“I hope Kobe sees this mural from above,” said Darwin Domingo, a 45-year-old artist and part-time basketball coach. Along with 14 other artists and 20 volunteers, he had spent the last 18 hours painting a larger-than-life mural of basketball legend Kobe Bryant and his 13-year-old daughter Gianna on the basketball court of the Tenement housing unit in Taguig City. Bryant and his daughter were among the nine people killed in a helicopter crash in California on Monday morning (Philippine time). The black-white-and-gray mural was the Tenement Visual Artists’ way of honoring their memory.

This was not the first time the courtyard of the housing facility had hosted a mural of NBA stars. The artists group’s previous subjects had included Stephen Curry, Kevin Durant and Lebron James.

“We were mourning the death of Kobe Bryant, so we asked ourselves, why not paint a mural for him as a tribute?” said Domingo.

The group worked from 9 a.m. Monday until 3 a.m. the following day to finish the mural of the 41-year-old former Los Angeles Lakers shooting guard. A Black Mamba logo, a name that Bryant gave himself, could be seen on the upper right corner of the artwork.

On one side of the tenement, the artists painted a wall black so that fans could write messages to the basketball icon.

“Rest at the end, not in the middle,” read one message, echoing Bryant’s mantra that he learned in high school.

Jerry Llaniguez Gabo, a member of the group of artists, said that they also lit 24 candles, Bryant’s jersey number upon retirement.

Staples Center in Los Angeles may have been the basketball star’s home court for his stellar 20-year career, but Bryant himself said he found a second home at a humble court, also in Taguig City, just 3.5 kilometers away from the tenement. “Every time I come here, I’m always welcomed with open arms. This is my second home away from home,” Bryant said on his second visit to Barangay Pinagsama Phase I in 2009.

On his third visit to the area in 2011, he spent about an hour training teenage boys from Gawad Kalinga villages.

One of the boys, Rensel Estrellado, fondly recalled the moment he met the NBA legend.

“It was really unbelievable!” Estrellado said. “My father just told me to go to the nearby court to play basketball. I thought it was just an ordinary barangay league game.”

The covered court was painted in purple and yellow, the Lakers’ team colors.

Estrellado, now age 26, added that the 6’6” shooting guard made them do pushups and drills. “I was playing with an NBA player and I was speechless.” His favorite part of the short encounter, however, was when they received a pair of shoes and socks, a shirt and basketball from Bryant.

Estrellado confessed he was a solid James fan until he met Bryant. During an interview with the Inquirer, he even showed his Lakers phone case.

“I bought this the moment I got my phone,” he said.

Los Angeles LakersLike his fellow neighbors who also had the privilege to meet Bryant, Estrellado was shocked over his passing.