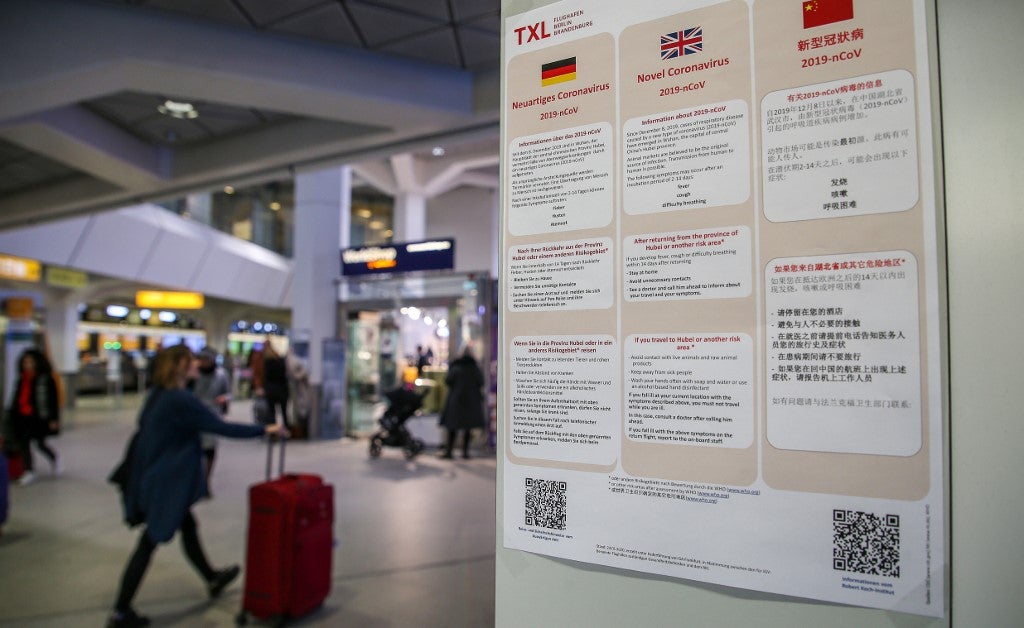 Informations in German, English and Chinese languages about the Novel Coronavirus 2019-nCoV are on display at the Tegel airport in Berlin on January 26, 2020.  (Photo by Andreas Gora / dpa / AFP)

MUNICH, Germany — A German man who tested positive for the strain of coronavirus currently sweeping China was infected by a work colleague, officials said on Tuesday, in what is believed to be the first human transmission in Europe.

The man had not visited China but a Chinese work colleague who was in Germany last week had “started to feel sick on the flight home on January 23”, said Andreas Zapf, head of the Bavarian State Office for Health and Food Safety.

He had attended a training session given by his Chinese colleague on January 21 at the office of a car parts supplier Webasto in Stockdorf in Bavaria and tested positive for the virus on Monday evening.

Unlike the other patients, the 33-year-old had not recently travelled to China.

He remains in hospital in an isolation ward, but Zapf said he “was doing well.”

The Chinese woman immediately sought medical attention on her return to China and was confirmed to have caught the virus, which has spread rapidly in recent weeks after first emerging in the Chinese city of Wuhan.

The woman had recently returned from visiting her parents in the Wuhan region, Zapf said.

In a statement, the Webasto company said it had halted all business travel to and from China “for at least the next two weeks”.

Health officials are checking some 40 people that the two infected workers have been in contact with recently, including colleagues and family members.

The virus has so far killed 106 people and infected over 4,000 — the bulk of them in and around Wuhan.

Cases have also been reported in a string of other countries, including the United States, France, Australia and Japan.